Slave guard leader (Until his death).

Keep Debra and Dexter as slaves

Kill Debra and Dexter (both failed)

Octavio is a minor villain in Dexter: Issue 5.

After Steve Gonzalez knocks out Dexter Morgan and his sister Debra, he calls upon Octavio to take him to Mar Dorado, an island filled with people taken as slaves to build a resort for Steve. After waking up, Dexter threatens to kill Steve, to which Octavio tazes him as punishment. For several days, Dexter is forced to work on the resort, with Octavio occasionally beating him for his own amusement.

Eventually, Dexter is reunited with Debra at a warehouse where Steve plans to kill them both until the FBI arrives, where Steve then orders Octavio to kill them both. However, Dexter manages to free himself from his bonds and take the pitchfork Octavio had repeatedly threatened Dexter with in the past and when Debra isn't looking, he stabs Octavio in the neck with it. 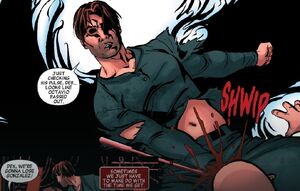 Dexter kills Octavio.
Add a photo to this gallery

Retrieved from "https://villains.fandom.com/wiki/Octavio_(Dexter)?oldid=4064667"
Community content is available under CC-BY-SA unless otherwise noted.