Octomon is a minor antagonist in Digimon Fusion that is one of Neptunemon's henchmen. 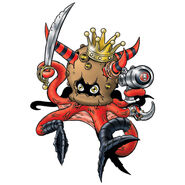