Servant and henchman of Auric Goldfinger

Hat with steel rims inside (used as projectile)

Oddjob is the secondary antagonist of the 1959 James Bond novel Goldfinger and its 1964 film adaptation. He was the personal bodyguard and enforcer of Auric Goldfinger and a fiercely mute opponent for James Bond. He is primarily known for his steel-rimmed hat which he uses as a deadly throwing projectile. Like Red Grant and Jaws, Oddjob is considered as one of the most famous henchmen of the franchise.

He was portrayed by the late wrestler Harold Sakata.

Oddjob was a Korean citizen who was perpetually mute, but extremely strong as he was able to break the railing of a staircase with his hand and the mantel of a fireplace with his foot. He is also revealed to have a taste for cats as food, apparently acquired in Korea when food was in short supply; this was shown when Bond frames Goldfinger's yellow cat for the destruction of surveillance film, which resulted in an angry Goldfinger feeding the cat to Oddjob as punishment. Eventually, Oddjob was killed when Bond used a knife to shatter the window next to his seat on an airplane, which depressurized the plane and sucked Oddjob out of the window to his death.

At the beginning, Oddjob enters Bond's hotel suite, where he knocks out James Bond and kills Jill Masterson by covering her in gold paint as punishment for selling out Goldfinger.

During Golfinger's game of golf with Bond, Oddjob acts as Goldfinger's caddie. When Bond later tricks Goldfinger, the latter orders Oddjob to give him a demonstration of his strength. Oddjob then uses his steel rimmed heat to sever the head of a nearby marble statue before crushing a golf ball with his hand.

While Bond and Tilly Masterson sneak around Goldfinger's facility at night, Oddjob used his hat to kill Tilly before capturing Bond. The agent tries to escape, but is then captured again after a car chase through the compound. However, Goldfinger decides to spare Bond for the moment after being duped by the latter to believe that he knows about Operation Grand Slam.

As it turns out, Operation Grand Slam involves destroying Fort Knox and its supply of gold so that the value of Goldfinger's gold will increase many times to become the most richest man in the world. It also turns out that Oddjob himself is involved of it as he killed Mr. Solo when the latter refused to be a part of Goldfinger's scheme to attack Fort Knox. He then drives the car containing Solo's corpse on a junkyard and presses it into a cube, destroying any evidence.

At the battle for Fort Knox, Goldfinger locks Bond, Oddjob, and Kisch in the gold vault with an atomic bomb given by Mr. Ling. Realizing that they have been betrayed, Kisch tries to disarm the bomb to save himself and Oddjob. However, despite Goldfinger's betrayal, Oddjob tosses Kisch to his death, ensuring that Goldfinger's plan must succeed, even at the cost of his own life.

A brutal fight erupts between Oddjob and Bond: Oddjob throws his hat, but Bond ducks and it misses. However, even without the hat, Oddjob proves to be incredibly powerful and almost unstoppable, much to Bond's frustration. Bond eventually gets hold of Oddjob's hat - this is the only time Oddjob shows anything close to fear - and throws it, but Oddjob calmly ducks and it wedges between two bars. Oddjob goes to retrieve it, but when he puts his hand on the steel rim of the hat, Bond grabs a cable and connects it to the bars, electrocuting Oddjob to his painful death.

Oddjob appeared in the animated series James Bond Jr, as a recurring foe to the title character, who is the teenage nephew of the famous superspy. Unlike his live action counterpart, this Oddjob wears "Hip Hop" style clothing and can speak regularly despite supposedly occuring in the same continuity as the film series. 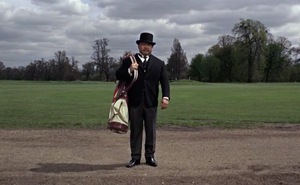 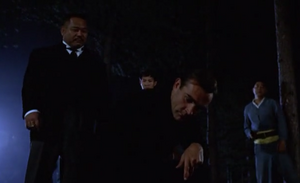 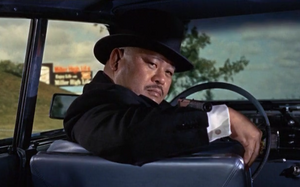 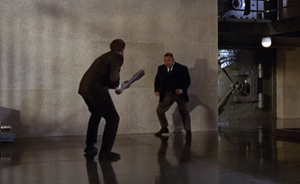 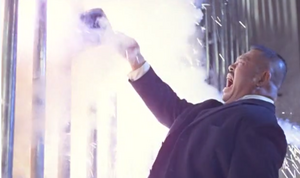 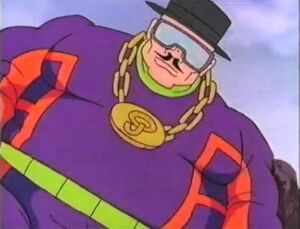 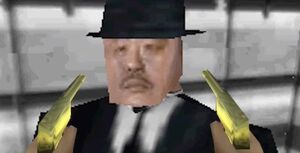 Oddjob in the Goldeneye video game 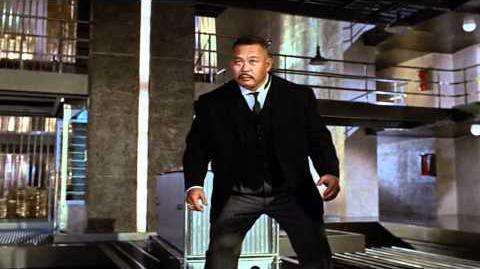