Owner of the Eye of Odin

Retrieve the Eye of Odin.

Odin is a major antagonist in the animated series Gargoyles. He is a legendary figure from Norse mythology, king of the Aesir gods and a Child of Oberon, as in a member of the magical race of fairies that originated from the Island of Avalon. Much like his mythological counterpart, although this depiction in the TV animation is also antagonistic, is also reasonable, fair and wise, acting as an anti-villain rather than a force of chaos. He made his major appearance in the episode "Eye of the Storm".

He was voiced by the late William Morgan Sheppard, who also played Erik Hellstrom in Disney's Atlantis: Milo's Return.

According to the series creator Greg Weisman, Odin acted as a vassal to King Oberon, having been entrusted to rule over the Aesir, a branch of the main Children of Oberon that lived in Scandinavia and formed the basis of the various Norse myths and legends. Odin was also in possession of Sleipnir, a great black stallion that could walk on air and an offspring of one of Oberon's Children, possibly one of the Aesir. Later in their history the Aesir perished during the war known as Ragnarok, albeit it was less destructive then later interpretations gave credit. Odin, alongside his steed, Sleipnir, where the only known survivors and had been banished from Avalon along with the rest of Oberon's Children, forced to walk the earth until they were to be summoned back by their king.

Sometime before the great war Odin's right eye had been removed during his time as a vassal, which left him greatly weakened. The eye was brought to Avalon, where it was forged into a necklace containing a vast amount of magical power. The Eye of Odin eventually found itself stranded in the human world, with knowledge of its magical powers being reduced to mere myth. As such, during his exile in the human world, Odin traveled the Earth in search of the eye, hoping to restore his lost power.

Eye of the Storm

Upon arrival in Norway on board the Avalon skiff, Goliath, Elisa, Bronx, and Angela are welcomed by Odin, clad in his black cloak of stars. Odin offered a fur coat for Elisa to keep warm, but in exchange for the fur he asked Goliath to trade him the Eye of Odin. Elisa gave Goliath a warning that the Eye was to dangerous for anyone to have, to which Goliath agrees and refuses to part with it. Goliath asks the old man for a different trade, but Odin turns away from them just as an ice storm begins to fall, he then points out that Elisa will not survive for very long in the frozen temperatures and disappears in the storm. Fortunately, Goliath, Angela and Bronx leave Elisa behind to be tended by a passing father and son, Erik and Gunther Sturluson, whom the gargoyles rescued from falling down a cliff inside their car.

Out in the woods, Angela was asking Goliath about the cloaked figure who wanted the dangerous item from him. Goliath did not recognize him, but stresses the importance of not letting the old man obtain the Eye, remembering past experiences in which both Fox and The Archmage wore the Eye and how it transformed them into monstrous threats. He places the glowing Eye in the pouch around his belt. Just the, rising out of a thicket of snow is Odin, now under the guise of a massive and hostile polar bear which attacks Goliath. Bronx and Angela attempt to drive away the bear, but it brushes them off with little effort. The three gargoyles failed to defeat him. Odin jumped on Goliath, stealing Goliath's pouch which contains the Eye of Odin and began running away. Goliath gives chase after the polar bear by gliding down a hill. The gargoyle opens the bear's jaws with a pouch and successfully knocks it down the hill and into the frozen pond bellow. The bear had seemingly disappeared without a trace thus leaving Angela wondering as to how. Goliath immediately deduces that the one-eyed polar bear was not an ordinary animal, but in fact the old man from before. He realizes that the elderly wanderer is capable of sorcery and will stop at nothing to acquire the Eye. To that end, Goliath decides that they should meet up with Elisa and leave immediately.

Having become frustrated Odin and Sleipnir break into the Sturluson family's house and capture Elisa. Odin gives Goliath an ultimatum, either he gives him back the Eye or Elisa suffers a sudden death. Angela and Elisa both warn Goliath that Odin will become more powerful after regaining the amulet, but instead Goliath dons the Eye himself. With its power, Goliath becomes endowed with magical power, now able to fly and can withstand Odin's ice blasts. He rescues Elisa and threatens the god, telling him not to harm his friends again or he will pay greatly, but Odin flies off with Sleipnir, shouting that their battle has not ended just yet.

The following day, Elisa and the Sturlusons believe that Odin is causing the recent snowstorm, while Goliath is scouring the skies in search of the god. They decide to make refuge inside a nearby cave until the storm clears away. That night Angela notices Goliath seeding the clouds, thus causing the storm. The Avalon World Tour and the Sturlusons confront Goliath, whose behavior has become that of a tyrant, even going so far as trapping them inside the cave with a boulder.

Goliath challenges Odin to one final battle. The god accepts, making his appearance through a lighting bolt and dressed in his battle armor. The two being the fight by exchanging blasts of lightning, though Odin tries talking Goliath out off fighting him by pointing out that he had personally summoned him to Norway in order to reclaim the Eye. Goliath, now utterly obsessed with power, refuses to give back the Eye and further weakens the god by draining him of his strength. Odin is almost defeated but uses his remaining magic to free the gargoyle's captives from the cave. Elisa further pleads Goliath that the Eye has possessed him while Angela tried removing it by force. The angered Goliath bears his wrath on them, opening up a a fissure in which they fall. Elisa and Bronx manage to escape, but Angela purposefully remains inside to be crushed by the moving walls in order to have Goliath realize the error of his ways. Indeed, the gargoyle regains his senses and rescues his daughter from the fissure and forcefully removes the Eye of Odin, turning himself back to normal and passes out from overexertion. Odin grabs the Eye and at last places it back into his head, regaining his former strength. After Goliath wakes up, Odin apologizes for the wrongdoings caused to Goliath and his friends, pointing out his weakness in dealing directly with mortals. Goliath also apologizes, shamefully realizing that he is not knowledgeable enough to either fight a god or be one. Odin realizes that the both of them have gained much wisdom in their fight. He then rides Sleipnir up on the Rainbow Bridge as the sun rises.

The Gathering: Part One

During the Gathering, the return to Avalon of virtually every Child of Oberon, Odin lines up with the rest of people in front of their king. Oberon is pleased to see that Odin has reclaimed his eye while Odin is pleased to see Avalon again. Just then, The Weird Sisters appear with Banshee, who gets into a brief fight with Odin over a comment regarding her high-strung personality. The battle begins with an exchange of the Banshee's siren wails and Odin's lighting and frost, and culminating with the two of transformed into a giant worm and polar bear, respectively. Oberon is initially excited to witness the fight, but quickly orders them to stop. Since neither would yield the fairy king encases the two combatants in ice, then reverts them back to their original forms. He punishes the Banshee for her pride by having her mouth shut with a metal clasp, only to be removed once she shows genuine remorse for her arrogance. The fairy king then unfreezes them both so he may continue attending to the Gathering. Odin, along with the other fairies present, watches as Oberon goes off to capture the absent Puck and forcefully return him to the island.

As on of Oberon's Children, Odin possessed vast magical powers that easily made him a force to be reckoned with. In addition to his shapeshifting, the ability to create ice, snow and lighting, as well as a weakness only towards iron which made him difficult to overpower, should Odin be brought down with a normally killing blow he would merely decompose into a magical aura that would recompose itself at a later period, as was the case with fellow fairies Raven, Banshee and Anansi.

One weakness unique to Odin was the lack of his right eye which seemingly drained him of a considerable amount of vitality, stamina and magical energy. Goliath realized that the god was passing himself out of necessity to conserve his strength. He also realized that the Eye could siphon away from the god's power and channel it into the Eye's wearer.

Shapeshifting: All Children of Oberon are in fact constructs made off magical energy, thus lacked any actual anatomy to speak of and could freely change into various forms and shapes at will, their bodies first being enveloped in bright light. In Odin's case, the seemingly elderly looking god shifted between cloaked wanderer who walked with the help of a staff, a giant white bear and his armored human form. Despite the large advantages that usually come with metamorphism, Odin could not grow a new right eye, thus whatever form he took people could recognize Odin by his half blinded face.

Ice, Snow and Lightning conjuring: Odin displayed a unique affinity towards manipulating weather, seemingly summoning snow clouds without even a hand gesture, although in Goliath's case the clouds starting snowing by means of condensation manipulation, by throwing balls of fire into the clouds. Odin produced gusts of cold wind and ice chunks out of thin air by pointing his hands towards his targets, same with lightning but he could also change its direction midway through its toss, as demonstrated during his fight with the magically empowered Goliath. He also demonstrated the ability of erecting ice shields.

Teleportation: Odin demonstrated this power but a single time, having appeared from the sky in the form of a lightning bolt in front of Goliath.

Hammer-space: While in his wanderer form, Odin could produce a large fur coat seemingly concealed underneath his own cloak despite it being impossible. This may in fact be another form of teleportation or object conjuring.

Superhuman physical strength: in his bear form Odin could wrestle on even grounds with beings of superior physical power and endurance such as Goliath, Bronx and even the Banshee's Cromm-Cruach (id est the giant worm form). 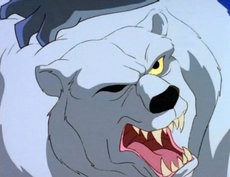 Odin in his polar bear form.
Add a photo to this gallery

Retrieved from "https://villains.fandom.com/wiki/Odin_(Gargoyles)?oldid=3652198"
Community content is available under CC-BY-SA unless otherwise noted.