Rishid Ishtar, known as Odion Ishtar in the 4Kids dub, is the adopted older brother of Marik Ishtar and the second-in-command of his Ghouls in Yu-Gi-Oh!.

He was voiced by Michael Alston Baley.

Rishid was adopted by Marik's parents, and was going to be the tombkeeper, until Marik was born (after his sister Ishizu). When Marik and Ishizu snuck out, their father punished Rishid, but awakened inside Marik and killed his father. Rishid contained within Marik.

He became one of the Ghouls when Marik began seeking out the Egyptian God Cards. During the finals of Battle City, Marik instructed Rishid to pretend to be him so that no one would know Marik's true identity. Rishid dueled Katsuya Jonouchi with a deck of trap cards, and nearly defeated him, but Marik told him to finish Jonouchi with the Winged Divine Dragon of Ra. He summoned the fake Ra that Marik had given him, but the real one was angry for using a counterfeit Ra card and struck them both with lightning, knocking them out. Jonouchi got up first and won the duel by default. Without Rishid, Dark Marik reawakened.

Rishid did not wake up until Dark Marik's duel with Yami Yugi, and attempted to help Marik defeat Dark Marik. In the end, Marik and Dark Marik were switched around, and was destroyed by Marik when he forfeited the duel.

Rishid later appeared alongside Marik and Ishizu to witness the duel between Yugi and Atem, which was being played so that Atem could go through the door and rest.

Though he worked for Marik as one of his Ghouls, Rishid is not truly evil, and wants Marik's good side to overcome his evil side.

Rishid appears as a recurring boss in Yu-Gi-Oh! The Falsebound Kingdom. You fight him once in both Yugi and Kaiba's campaign and three times in Jonouchi's campaign. In all his appearances, he uses the same three monsters: Mystical Beast Serket and two Embodiment of Apophis, like in the anime.

In Yugi and Kaiba's campaign, you fight him on the level "Hallowed Land of Ishtar." When the player defeats Scott Irvine at Sygh-Varths, Scott flees to Ishtar in the deep southern region. After Marik Ishtar went into exile in Jonouchi's campaign, Odion returns to his homeland to protect the temple in honor of his master. It is believed that Odion was unaware of Scott being inside the temple and that Yugi or Kaiba were there to desecrate it. Still, he sends four soldiers, each with spirit monsters and then the player can fight him. Once he is defeated, the player finds the secret room which leads them to the next level in the heart of the computer.

In Jonouchi's campaign, a prequel, Rishid has a bigger role along with Marik and becomes a rival to Katsuya Jonouchi, like in the anime. Before the events of Scott, Emperor Haysheen was still in command and appointed Marik as high mage of the Imperial Order and sent him to take out Jonouchi and his Black Dragon Squad. Marik sent Rishid and several soldiers to the Chelyumn region. Once the player defeats the soldiers sent to your castle, the player can fight Rishid and end the level. There is a bit of dialogue between Jonouchi and Rishid. Rishid still wishes to take down Jonouchi, but becomes touched by Jonouchi's courageous words and behaves more honorably towards him. In the next level, "Minion of Darkness," Marik and Ishizu Ishtar join Rishid along with more powerful soldiers and fight Jonouchi in the Beasty Badlands. Marik sends his entire army including Ishizu and Rishid to Jonouchi's party and after a certain amount of time, Mai Kujaku appears and takes out the soldiers, leaving only the Ishtar family, making them retreat if Marik loses.

Rishid appears one final time in the level "Master Plan" with Ishizu in the Nonnber region. Rishid says Marik went rogue to find the power of the Egyptian Gods. Jonouchi and his party must defeat Ishizu, Rishid and all the soldiers to win the level. After winning the first time, Mystical Beast Serket joins the list of monsters. Jonouchi then fights in the next level, Ishizu likely went to find Kaiba and Rishid likely returned to the homeland, waiting for Marik's return. 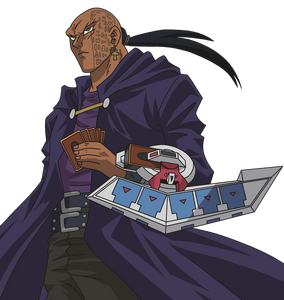 Retrieved from "https://villains.fandom.com/wiki/Odion_Ishtar?oldid=3246945"
Community content is available under CC-BY-SA unless otherwise noted.