Get his revenge on the Patrangers for killing his brother.

Leading a raid on the Global Special Police Organization

Odordo Maximoff is an alpaca-themed Gangler Monster and one of 3 antagonist the other two were Togeno Aves and his older brother, Anidara Maximoff, but is the main antagonist in episode 14 of 2018 TV series called Kaitou Sentai Lupinranger VS Keisatsu Sentai Patranger. Also he's equipped with a Trigger Machine Drill.

Odordo Maxioff's head is a white robotic alpaca head with orange eyes, his body has white alpaca wool with holes on it, his Gangler safe is on his belly, his grey arms and legs are robotic like, he also has white alpaca feet, his weapon is the Alpakanabo a White kanabō with an alpaca's orange mouth on the middle.

He made his first appearance disguised as a human in order to fool the police into attacking Togeno Aves, but during the flashback, he and his brother were discussing on how to use these treasure to cause mayhem however they soon caught in a fight between Rabroom Jaws and Patkaiser.

He managed to move out of the way, but Anidara was then crushed.

So, he teamed up with Togeno Aves so he could get revenge on the Patrangers for killing his brother. However when they were in the forest the lupinrangers ambushed them Togeno dodge the attack, but as for Odordo he got tied up to a tree which make things much easier for Kairi to gain access to his safe (which his password is 4-0-4), but turns out the treasure itself was in the hands of the police.

With his help, he poisoned Keiichiro Asaka inside the drill and almost defeated the rest of the Patrangers, but was defeated. Returning in a giant size, he was finally killed by his own Lupin Collection. 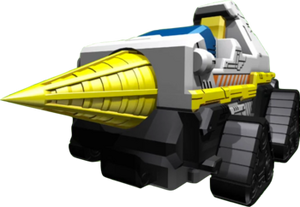 Trigger Machine Drill
Add a photo to this gallery

Retrieved from "https://villains.fandom.com/wiki/Odordo_Maximoff?oldid=3562356"
Community content is available under CC-BY-SA unless otherwise noted.