Manipulation
Has the law on his side
License to kill

Officer Abel Turner is the main antagonist in the 2008 film Lakeview Terrace.

Not very much if known about Abel's backstory, but it appears his personality seemed to largely be defined on a desire and need for excessive power and authority over others, in which he uses his status as a police officer to enforce. He was also particularly very conservative, as seen as he highly disapproved of Chris and Lisa's interracial marriage, as well as Chris's liberal viewpoints and standards. It appears that Abel seems to view those with liberal viewpoints as untrustworthy and a danger, and desires to use his power as an officer of the law to straighten them out. In spite of his love of being an officer, Abel also seemed to be as bad as the criminals he was arresting, if not even worse. He showed very little regret, shame, and humuliation at his immoral actions, implying he has engaged in criminal activity in the past. It is also implied that his wife cheated on him to run away from him because oh his controlling and strict standards. Abel seems to be unable to comprehend why, implying he has little insight into his immoral actions, and felt no guilt at the end of the film possibly trying to murder Chris and Lisa.

Police Officer 3rd Grade Abel Turner is a 28-year veteran sergeant in the L.A.P.D. A single father, he is particularly strict toward his two young children, Marcus and Celia. As his kids go to school, the new neighbors are moving in. It turns out that the new homeowners are a young interracial couple, Chris and Lisa Mattson, who are recently married and buying their first home.

Chris's first exchanges with Officer Turner have somewhat hostile undertones, with Abel making comments on Chris's smoking and listening to hip hop music. The following night, Chris and Lisa have sex in their swimming pool. Unknown to them, Abel's children are watching. Abel arrives home to see this spectacle and is upset, so he repositions the home security floodlights so they shine into the Mattsons' window, keeping them awake and irritating them. When Chris has the opportunity to discuss this, Abel claims that the lights are part of his security system to prevent crime and says that it's a complex process to shut down the system and the lights.

Abel attends a housewarming party hosted by Chris and Lisa. He is extremely garrulous, but has an edge, and criticizes Chris and his friends for their liberal political and social tendencies, on things ranging from the environment to police brutality. As he leaves, Chris tells Abel that he is starting to take offense to him, but doesn't plan to move. One evening, they hear noises downstairs, and find the tires of Chris's car slashed. They suspect Abel and call the Los Angeles County Sheriff's Department to come, but the police are unable to do anything.

The Mattsons have dinner with Lisa's father, who tells them they could choose to move away, if they wish, because acrimony with a police officer may mean trouble for them. Lisa's father however first ignores Chris, then he asks if they are planning to have children. The heated exchange between Chris and his father-in-law indicates problems between the two since he got engaged to Lisa, as it's likely that Lisa's father holds many similar views to Abel.

As the feud between the neighbors continues, it also causes stresses in the marriage between Chris and Lisa. Chris buys his own floodlights, and shines them into Abel's bedroom, as a way of taking matters into his own hands, although this is disapproved by Lisa as an attempt at "manliness." Lisa soon reveals that she is pregnant, which brings a rift into their marriage as Chris doesn't want to have children yet. Chris later finds out that Lisa skipped birth control pills to force the issue and when he confronts her, she accuses him of being shortsighted.

One day, when arresting a falsely suicidal gunman named Damon Richards who took his wife and baby daughter hostage, Abel uses verbal abuse to dissuade the suspect from committing suicide. However, for this, Abel is suspended with pay indefinitely after the suspect files a lawsuit against the LAPD. Chris and Officer Turner continue their feud with Abel hosting a loud bachelor party while the kids are away with their aunt, with some of his cop buddies.

Chris plants trees at the fence between their houses, which leads to an almost violent exchange between the two neighbors. Later, Chris goes to a local bar and as he finishes his drink, Abel enters and tells Chris that he lost his own wife, when a car hit her on a highway. Abel makes a last cryptic comment about his wife, wondering what she was doing out in that area, at that time with her white boss, when she was supposed to be working (implying she was being unfaithful to him).

Wildfires rage in the hills surrounding the community. The neighbors attend a barbecue in a home down the hill. Abel's informant Clarence Darlington is sent to trash their home. Lisa goes home early surprising him and they struggle, which leads to her falling on her head. Chris races home when he hears his burglar alarm go off with a frustrated Abel following him. Chris rushes to the injured Lisa, and Abel comes upon his hired criminal trying to escape and shoots him twice in the chest and once in the back, killing him.

The wildfires are not contained and the neighborhood is instructed to pack a few things and leave their homes. Abel watches from his home nearby. He is hosing off his roof and doesn't want to leave. He enters the Mattsons' home, hoping to retrieve Clarence's cell phone because he is afraid his call to the perpetrator could be traced, implicating him in the break-in. Before he can find it, Chris and Lisa unexpectedly return from the hospital and Abel returns to his home. Chris thanks Abel for helping him and tries to express a sense of community with the police officer. When the Mattsons are packing to leave, Chris discovers the cell phone under their bed, and picks it up. He dials the last number logged on the phone and hears Abel answer. Chris realizes Abel is responsible for the break-in. Abel comes over with his gun drawn, trying to convince Chris that the perpetrator was a police enemy and was trying to set him up. The two struggle and Chris tells Lisa to take the car and perp's phone and get the police. Abel shoots Lisa's car and she crashes into a parked car. Chris tackles Abel and gets his gun, then runs to help Lisa out of the car. This leads to a standoff, with Chris holding Abel's gun and Abel now holding a second gun from his leg holster.

Officers of the L.A. County Sheriff arrive, and Abel hides his gun behind his back and tries to convince them Chris is unbalanced. Chris won't drop his weapon until Abel puts his down, but the racist raises his arms and insists that he is unarmed. Chris finally throws Abel off, by asking about his wife's death and how he wasn't able to recognize that she had become unfaithful to him. Infuriated, Abel finally cracks, pulls out the hidden gun and shoots Chris in the shoulder; his action causes his true nature to fully be exposed by the County Sheriff officers, which Chris planned to happen, and Abel is then promptly gunned down and killed by the officers.

Abel being strict with his two children, Marcus and Celia.

Abel explaining to Chris how he disapproves of his interracial marriage.

Abel making hostile remarks to Chris at their housewarming party.

Abel being hostile once again with Chris' wife, Lisa.

Abel being scolded by his fellow deputies for threatening a citizen whilst on duty.

Abel having a drink with a reluctant Chris at a bar.

Abel secretly phoning his accomplice to get him to vandalize Chris and Lisa's house.

Abel killing his accomplice to erase all evidence that he was ever connected to him.

Abel pretending to be unarmed in front of a group of L.A.P.D. officers, following a fight with Chris.

Abel gunned down by the officers after pulling a gun on Chris. 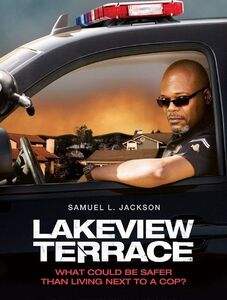