Traffic Cop and part of the Boov Control

Arrest Oh for sending invites to the Boov and the Gorg (formerly).

Officer Kyle (simply known as Kyle) is the secondary antagonist-turned-supporting protagonist of DreamWorks' 31st full-length animated feature film Home, which is based on the 2007 children's book The True Meaning of Smekday by Adam Rex. Kyle is a traffic cop and part of the Boov Force who work for Smek to find and arrest Oh for sending a invitation to the Gorg.

He was voiced by Matt Jones.

Invitation to The Gorg

Kyle is first seen doing his job as a traffic cop when Oh goes and sees him and calls him "friend". Kyle says he's not his friend but Oh gives an example like having conversations with when his doing his job but Kyle disagrees with him. Oh wants to invite him to his housewarming party, but Kyle refuses, saying it is a waste of time. Oh, thinking it's only because Kyle is busy, sends him a evite, but accidentally sends it to absolutely every alien species in the galaxy, including the Gorg. Kyle is furious with Oh, because with the invitation, the Gorg will be able to track the Boov to Earth. Kyle tries to arrest Oh by sending backup but Oh gets away.

Later on Kyle tries to explain to Smek that Oh isn't his friend. But Smek sends him to find Oh and and obtain the password to his email, as Oh's password is unique (it is usually "password"). Kyle investigates a Mopo Convenience Store to see where Oh went. He sees foot prints from the slushee left behind and uses the Busta Lime flavor to track down Oh, who is traveling with a teenager named Tip in the Slushious.

Kyle finally finds Oh at a gas station. Oh still calls him his best friend but Kyle is still insistent that he is not. Before he can arrest Oh, he is knocked unconscious by Tip knocking over a stack of gas cans. While Oh and Tip feud over who goes where, Kyle tries multiple times to stop them and get the password. Instead, he ends up being hit on the head again by the car door, getting a full mouthful of popcorn, and covered in nacho cheese and tortilla chips. He slips and falls, causing his bubble-gun to fly out of his hand. Tip and Oh escape just before the bubbles emitted from the gun cause a gas stand to explode.

Kyle, singed, survives the explosion, but he finds no sign of Oh and Tip. He thinks that Oh didn't survive. He sadly says, "All I wanted was his password."

Kyle goes to Paris and reports to Smek that he "erased" Oh. As they need Oh for his password, all this gets Kyle is a smack in the head from Smek's "Shusher." Later on, Smek asks Kyle for any ideas on how to hack into Oh's account. Kyle meekly suggests typing in random things. He is pleasantly surprised when Smek approves. The idea proves fruitless though, as only Oh knows the exact password.

Later on, Oh, disguised with a single beauty mark which fools all the Boov, inlcuding Kyle, and Tip arrive in Paris. They sneak into the "Great Antenna", the Eiffel Tower, and Oh manages to to log in and stop the evite a mere second before it reaches the Gorg. When they try to exit the Eiffel Tower, they find themselves surrounded by Boovcops, Kyle among them. When Smek reveals that the computer saw through Oh's "elaborate" disguise and removes the beauty mark, Kyle is dumbfounded, as he thought Oh was killed in the explosion at the gas station.

When Tip causes the Eiffel Tower to go upside-down, Kyle tries multiple times to chase them down. He is knocked out of one bubble by Oh and Tip, and then out of another by the cowardly Smek. When he manages to acquire another bubble, he gives chases to Oh and Tip, who are holding on for dear life to the very tip of the Eiffel Tower. When they fly through a ball of gargoyles deemed useless by the Boov, one of them drops into Kyle's bubble, scaring Kyle almost out of his wits. Then a statue of Joan of Arc on her horse lands on top of him.

Battered and barely conscious, with his bubble barely holding together, he manages to block Oh and Tip's path as they try to run from the Tower. He is confident this time that they can't escape. But Oh uses his status as a fugitive to his advantage when he touches the steering ball of the bubble, which automatically causes the bubble to self-destruct. Kyle ends up lying in a garbage can, defeated, while Oh and Tip manage to escape on the Slushious.

The Gorg manage to track the Boov to Earth, although Oh stopped the invitation. Instinctively, the Boov, Kyle and Oh among them, abandon Earth. But in space, the Gorg mother ship is preparing to destroy the Boov once and for all. They run in a futile attempt to escape. Kyle catches sight of Oh running towards the Gorg instead of away. He and the rest of the Boov (apart from Smek) are amazed that he would do such a thing, even more so when he announces that he has installed a Gorg Superchip into the Boov mother ship's system, allowing for much higher speeds.

As Oh says how the Boov were wrong about their prejudgments of the humans, and that he has earned the care of Tip, Kyle and the Boov turn blue with shame. But cold and heartless Smek dismisses this and tries to attack Oh with the Shusher. Before he can do so, though, Kyle stands up to him and stops him, much to Smek's shock and anger. Kyle announces that a new captain is indeed in order and that he thinks Oh is the rightful captain. When Smek objects, Kyle simply knocks him down and shushes him.

He offers the Shusher to Oh, who objects, saying that he is not the right material. Kyle simply explains to Oh that he's not the only Boov who makes mistakes, stating that his mistake was not being there for Oh when he needed him. Finally true friends, Kyle gives the Shusher to Oh and dubs him "Captain Oh".

Oh makes peace with the Gorg captain, who was tracking the Shusher, which turns out to be an egg containing millions of developing Gorg larvae. Two weeks later, Oh finally hosts his party, with humans and Boov alike, Kyle among them, in attendance. When Oh and Tip start up some dance music, Kyle and the rest of the Boov are initially confused and scared, as they are involuntarily dancing. But Kyle eventually sees how fun it is and goes with the beat, literally. 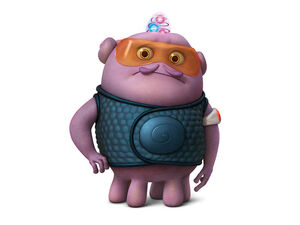 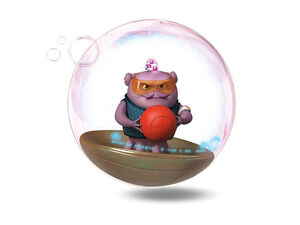 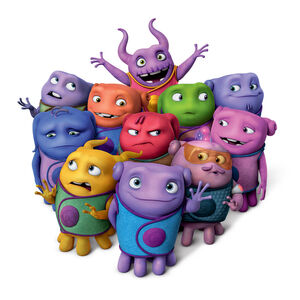 Officer Kyle, Smek and The Boov. 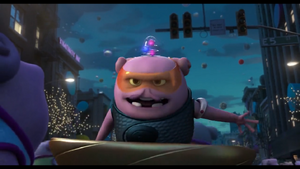 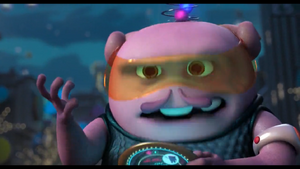 "You sent directions to EVERYONE?!" 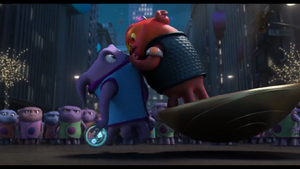 "YOU HAVE DOOMED OUR SPECIES!!!" 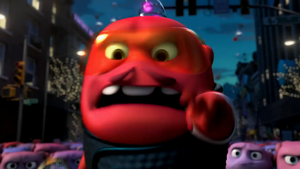 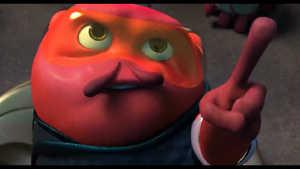 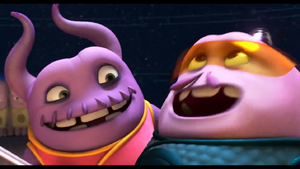 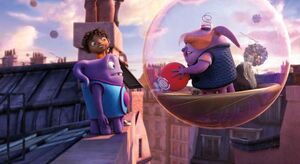 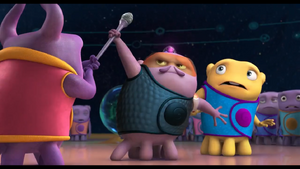 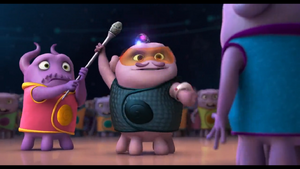 "Oh is right! We need a new captain! I thinks it should be Oh!". Kyle hits Smek with the "Shusher". 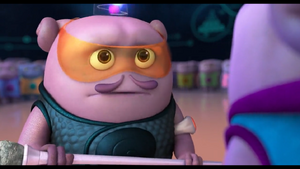 Kyle redeems. "My mistake is...not being your friend." 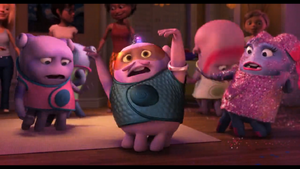 My hands are in the air like I just do not care! 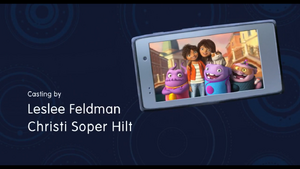 Officer Kyle in the credits with Smek, Oh, Tip and Tip's mother.