Antagonizing and harassing the Penguins

Capture the penguins at all costs (failed).

Officer X is recurring antagonist of the TV show The Penguins of Madagascar. He is an insane ex-animal control officer who is obsessed with busting the penguins.

He was voiced by Cedric Yarbrough, who also voiced Colonel H. Stinkmeaner on The Boondocks and Gerald Fitzgerald in Paradise P.D

X first appears trying to capture Max, a stray cat the penguins previously befriended. When they crossed paths, he soon proves a worthy opponent to the penguins, managing to beat their attempts to defeat him, with his abnormal skills and abilities. With their options running out, they hide Max by disguising him as a wild cat. X buys one minute, but then Max accidentally blows his disguise the next while gloating. Luckily for him, Alice stops X from catching him by putting him with a female red Rhodesian slasher. Not one to give up easily, he decides to sit and watch till Max tries to bail. However the penguins manage to outfox him by disguising Mort as a rabid chihuahua to lure away from the cage then switching Max with the real wild cat, who attacks X.

He next appears after the penguins are spotted, and animal control is called. He quickly traps them with his fish trap, only for them to escape by blasting a hole through the bottom. It is then revealed that his van has laser drilling abilities. After it lands, the penguins flee through a topside tunnel. However, it manages to follow them up a nearby staircase. After a brief struggle, they disable the van. But X is still on their trail. They almost lose him by diving back into the sewers. It turns out he is already in front of them, causing Skipper to shout "Sweet Dixy Dridles! How much are they paying this guy?" Quickly the penguins pull a last minute plan and cut the sewage pipes above X to knock him down. It fails, leading to X trapping them. But while he was gloating, a doll blasts out of the clogged pipe and into X's face, followed by sewer water. Their plan did work, and they escaped. Afterwards X went on a rampage of destruction around the city, and as such lost his job.

He next appeared after some of Rico's roach friends were being bothered by him. After hours of waiting, they found out it was him. He captured three of them, then revealed he still had some of his old gadgets because he knew they'd cross paths again. X was ready to enact his revenge, only for private to cause the roaches to crawl into his suit causing him to run off. He also lost his mustache in this episode.

His next appearance was during a heat wave. The penguins got rid of Alice so they could go swim in the East River, only her replacement turned out to be Officer X (Now Zoo keeper X). Remembering the penguins he went over to them, and told them that they should have finished him off the last time they clashed, as now X was the boss, and he was ready for revenge. The penguins tried to escape at night only for X to catch them. Next they tried to tunnel out, only for X to catch them again. Next they tried using a secret back up air vent that not even Alice knew about, only for X to catch them a third time. They ran one way only to bump into X, then the opposite way, only to run into X again. They jumped down a into the sewer only to meet X again. They jumped out and jumped out and over all wall, only to be caught by X again.

Getting desperate, they built a flying machine, and got away, it was all going well, till Private pointed out that it was possible that he had anticipated their plan, and had stowed away in the cart, just below them, and that it was odd that when they ran around the zoo collecting parts, that they didn't see him, panicking the penguins tried to open the cart but were to scared in case X was actually in there, and he was about to jump out and say on of his witty one liners.

Annoyed at their silliness, Private opened the cart to show X wasn't in there. Relieved, they relaxed only to find out that X was hiding in the umbrella. He took out his taser and then knocked them off the cart. Skipper caught Private while Kowalski and Rico fell back down into their habitat in the zoo. Private jumped back onto the cart, only to find X there. The crazed man thought he was finally going to get his revenge when Skipper interfered and caused the till of the cash register that they were using as a steering mechanism, to knock him off, he fell and landed on Alice's taxi and was last seen as it drove away. He next made a cameo appearance in Rat Fink. 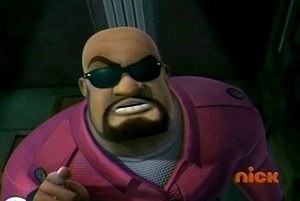 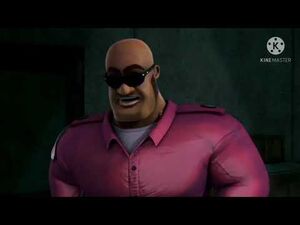