Disney's Adventures of the Gummi Bears

Raising the ire of Duke Sigmund Igthorn due to their incompetence

The Ogres are Duke Igthorn's minions and the secondary antagonists in Disney's Adventures of the Gummi Bears.

These ogres act as Igthorn's dim-witted footsoldiers. Compared to Toadwart, the smallest of all the ogres, they are not very intelligent, resorting to brute force under their leader, Igthorn. However, their size and strength are a formidable problem for the Gummi Bears, who often choose to escape the ogres or outwit them rather than fight them directly.

Adventures of the Gummi Bears

The ogres appear multiple times in most of the episodes. They were often depicted as extremely stupid, brutish and crude with a tendency to anger their master with their inability to carry out his orders. As a result, they were often bullied and mistreated by Igthorn when they stepped out of line or messed up his plans.

However, these ogres were certainly not without threat, being large and strong with a tendency to carry large clubs. They would no doubt cause great trouble if left to their own devices, yet due to their large size and small brains, they were not a match for the more agile and generally more intelligent Gummi Bears. Though they attempt to please their master, the Gummi Bears would often foil their plans of conquest or misdeeds. As mentioned above, these ogres are never physically fought by the Gummi Bears due to their muscular build and size.

Ogres are creatures that appear in Once Upon a Time native to the Enchanted Forest. Before the first curse, there was an ongoing ogre war. Sir Maurice desperately reached out to Rumplestiltskin to protect his people. He agrees to protect them from the ogres, but only if Belle becomes his eternal servant. Though Sir Maurice vehemently declines, Belle agrees to the deal so her loved ones will be safe.

When Emma and Snow are transported back to the Enchanted Forest through a portal, they travel with Mulan and Aurora in search of a magic wardrobe to take them home. While gathering wood, Snow is attacked by Aurora, who blames her for Prince Phillip's "death." Upon Mulan's intervention, Emma arrives, and believing Mary Margaret is being threatened, she fires a gunshot into the air. Roused due to the noise, an ogre manifests and chases after them. As the beast rushes towards a fallen Emma, Mary Margaret kills the ogre with an arrow to the eye.

Once Regina undoes the first curse resulting in everyone returning to the Enchanted Forest, they join Aurora and Prince Phillip, who report the ogres have since been defeated. 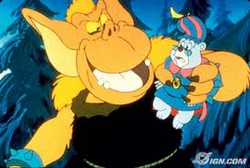 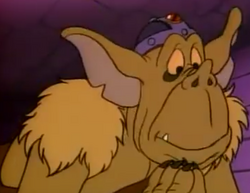 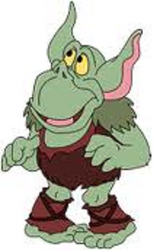 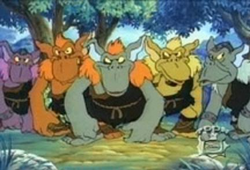 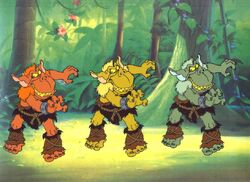 Add a photo to this gallery
Retrieved from "https://villains.fandom.com/wiki/Ogres_(Gummi_Bears)?oldid=3487648"
Community content is available under CC-BY-SA unless otherwise noted.