Villains Wiki
Register
Don't have an account?
Sign In
Advertisement
in: Villains of Folklore, Fantasy Villains, Cannibals,
and 24 more

Folklores and myths around the world

An Ogre is a type of monster common in fairytales and folklore - often confused with giants. These creatures are antagonists of many stories and vary in size from slightly larger than a human to hundreds of feet tall: unlike most giants, Ogres were said to be hideously ugly and more monstrous than the relatively human giants.

Perhaps the most notable aspect of an Ogre was said to be their immense hunger, often for human flesh, in fact their hunger is sufficiently legendary that many dictionaries define an Ogre as "a man-eating giant" or similar.

As well as being grotesque monsters Ogres were depicted as barbarians with little in the way of manners or benevolence, as a result the word has also been used to describe an individual who is seen as exceptionally cruel or brutal: unlike Giants, the brutal Ogres were even describes as engaging in cannibalism and thus would prey on weaker members of their own kind, in fact tales of Ogres were likely told partly out of fear of cannibalism and the strong social taboos that came with the subject ever since the early days of exploration, where people not accustomed to other nations or cultures witnessed (and often exaggerated) accounts of cannibalism or other practices, which they quickly told to others in the form of gruesome stories, involving monsters such as Ogres.

Although not always used to be the proper name for a female Ogre is Ogress - much as a female giant is known as a giantess, unlike the hideous Ogre males an Ogress may or may not be depicted as fairly attractive and benevolent: though they tended to be depicted as being just as unpleasant as their male counterparts.

Ogres have played a major villainous role in certain fairytales, such as "Hop-O' My Thumb" and "Puss in Boots". In Puss in Boots, the feline hero outwits an evil Ogre by tricking him into turning into a mouse.

An Ogress from Iceland with an appetite for children. See Grýla.

The Oni (鬼) are legendary Japanese monsters that are heavily involved in the nation's folklore - regarded as demons, ogres or trolls they are very popular characters both in traditional stories and in modern work, though they can be friendly they tend to be antagonistic.

Oni are normally depicted as hideous, gigantic humanoids with sharp claws, unkempt hair and two long horns growing from their heads - they can have varied numbers of eyes or extra fingers and toes and have skin of any color imaginable, thouh red and blue seem to be the most common.

Oni tend to wear tiger-skin loincloths and carry iron clubs, which is where the expression "oni with an iron club" came from (which means to be invincible).

Indeed Oni were seen as virtually unbeatable, the only way to really disperse them was with loud noise and celebrations - even to this day some villages in Japan perform these rituals to drive away Oni spirits.

As well as the ogres of today Oni have been believed by some to be gods, ghosts or other supernatural beings that caused unpleasant things to occur and originally they were said to be invisible to human eyes or formless - in modern times this ethereal being has been largely forgotten and replaced with the creatures described above.

Dzoavits was a demonic ogre from the mythology of the Native American tribe known as the Shoshoni who was infamous for kidnapping children, engaging in cannibalism, being involved in volcanic eruptions and even (it is claimed) stole the sun.

Dzoavits soon fought against a collection of mythological animals before the demon was finally imprisoned within a cave, where he presumably either died or remains to this day.

In Manx mythology, a Buggane was a huge ogre-like creature, native to the Isle of Man.

Bugganes were said to be covered in black hair, with claws, tusks and a large red mouth. As they were known to tunnel underground, they might be said to resemble a giant mole, though they were intelligent and spoke to people on occasion. A Buggane always had a particular home such as an old ruin, forest or waterfall, where it would remain unless disturbed somehow.

Bugganes were magical creatures, and were known to be unable to cross water or stand on hallowed ground. They were occasionally called upon by the fairies to punish people that had offended them. The most famous story involving a Buggane relates that one repeatedly tore the roof off St. Trinian's church on the Isle of Man. Another story tells of a woman's narrow escape after a Buggane is sent by the fairies to punish her for baking after sunset.

Busaw, also known as Buhaw, is a legendary creature in the folklore of the Philippines that resembles humans in appearance and behavior, raising farm animals and planting root crops. However, its favorite food is human, resulting in scattered human skeletons on the grounds of its dwelling place .

The Busaw was an Ogre with Ghoul's habit and diet: An evil entity who looked and behaved like ordinary human beings by day, it listened for sounds of death in the evenings, and dwelled in large trees near cemeteries. It had pointed teeth, hooked nails and a long tongue. It took banana tree trunks to replace the dead as it stole the corpses out of their coffins. Then, spiriting the corpse off after first turning it into a pig, the Busaw would feast on it and even try to feed it to their human neighbors during the day in order to turn them into ghouls like itself. To ward the Busaw off, all corpses should be washed completely with vinegar and strong-smelling herbs. Salt is also a Busaw repellent.

Humbaba is an ogre from Sumerian mythology who battled the heroes Gilgamesh and Enkidu in the Epic of Gilgamesh. The brother of the storm demon Pazuzu, he was assigned by the god Enlil to defend the Cedar Forest that served as the home of the gods, and to be a "terror to human beings". His face is described as being that of a lion, but he is commonly depicted in artwork as having a face shaped like human entrails, which the Sumerians used to read omens from the gods. He was also described as being able to breath fire.

In Tablet II of the Epic of Gilgamesh, Gilgamesh and Enkidu set out to the Cedar Forest to slay Humbaba. Forging ahead on his own, Gilgamesh finds the ogre and tricks him into giving up his power by offering his sisters as concubines. Captured by Gilgamesh, Humbaba is taken back to Enkidu, begging for his life. Enkidu convinces his friend to ignore the monster's pleas for mercy, and Humbaba is decapitated by the heroes while attempting to escape. 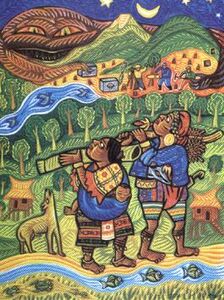 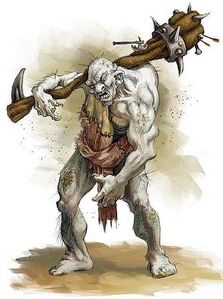 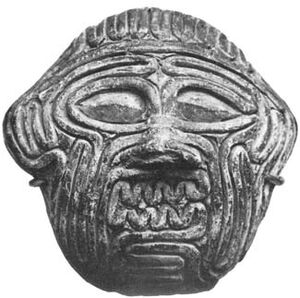 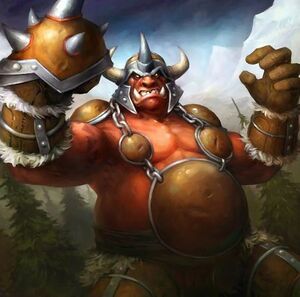 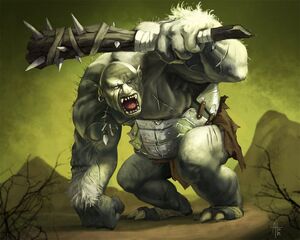 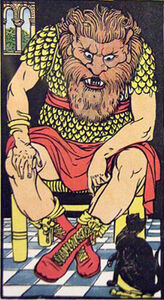 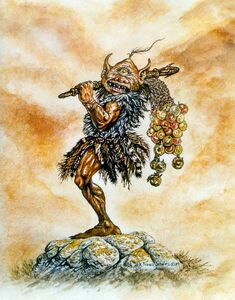 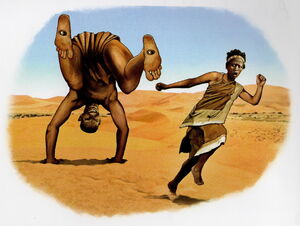 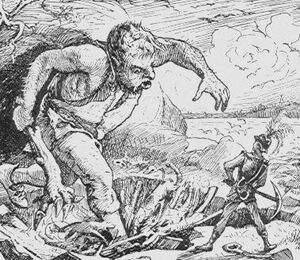 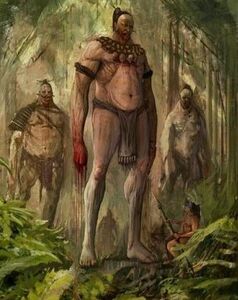