Leyend in the World of Twelve (formerly)

Sobbing over the loss of his beloved.

Cataclysmic Creation
Ogrest was created by mistake in one of Otomai's experiments. He is one of the central antagonists of Dofus games and Wakfu TV series and is the cause of the flood that ended the Age of the Dofus in 789. Together with Bolgrot are the only ones to have gathered the six dofus. It is presumed to be bound with Plasmogrine. In the Age of the Wakfu it is in Mount Zinit. During the Age of the Dofus, their whereabouts were unknown.

The legend that is told about Ogrest claims that he sought and found the 6 Dofus in order to acquire a power superior to the gods. He hoped to succeed in seducing Dathura. Unfortunately this one rejected him. Unable to be rejected, Ogrest would have killed her in a fit of rage. He immediately regretted his gesture but it was too late. Distraught, Ogrest retired to the top of Mount Zinit to cry.

He was infatuated by Dathura and for her, he tracked down and acquired the 6 Dofus, and in doing so gained more power than the gods of the World of Twelve. Unfortunately, she only cared about the Dofus and, in a fit of rage, he threw her into an abyss. He then went to the summit of Mount Zinit and cried, causing the great deluge that flooded the World, dividing it into the various Nations and lands that we know now in the Wakfu era. Ogrest now stands as the primary villain of the world of Wakfu, the Ogre which every disciple of the twelve gods longs to defeat. Ogrest sits at the top of Mount Zinit and can cause Ogrest's Chaos to random Nation areas, disturbing their ecosystems.

Despite his father's love, Ogrest feels a little lonely. Growing up, he realized that he was different from other children and feels rejected by them. He begins to wonder if he will not finish his days alone. To cheer him up, the Stones of Otomai (a kind of living stone) will show him someone who is even more to be pitied than himself: Dathura.

His quest for the ogrine will lead Ogrest to ally himself with the Flush brothers. These three pirates offered to help them find a fabulous treasure that could possibly contain ogrine. When the pirates finally discover the treasure, Ogrest is disappointed because he sees nothing but gold and precious stones. Finally, he gets his hands on a dofus and thinks it's ogrine. The pirates, who know the value of the dofus, propose to exchange his dofus for a jewel in the shape of a heart whose aspect evokes that of the ogrine. Obviously, Ogrest naively accepts this offer.

Seeing the episode special, one wonders how this little green and nice being could be transformed into a monster that hardly to express itself normally. Ogrest's adult appearance is not due to normal growth, but to repeated contacts with primordial Dofus.

In Ogrest's volume 1, it is discovered that Ogrest had to fight against an iop named Goliorak in order to protect Dathura that he was about to rape. Unfortunately, this warrior used the Emerald Dofus. As Ogrest is made from ogrines (a condensed of wakfu) the energy of the dofus resonated with him, brutally developing his anatomy.

In the TV series Wakfu, Ogrest is best known for having created the cataclysm named Chaos of Ogrest (year 789) which caused the end of the Dofus Age and the beginning of the Wakfu Era. It is this cataclysm that is at the origin of the disappearance of the family of Nox which was engulfed by a sudden rise of the sea 200 years earlier. The legend that is told about Ogrest claims that he would have sought and found the 6 Dofus in order to acquire a power superior to the gods. He hoped to succeed in seducing Dathura. Unfortunately the latter has rejected it. Unable to be rejected, Ogrest would have killed her in a fit of rage. He immediately regretted his gesture but it was too late. Disappointed, Ogrest retired to the top of Mount Zinit to cry.

A few days after his family abandoned him to Noximilien for fear of what had been transformed, the Mr. Vargasse notified him of the news, that they died due to the inhudation caused by the uncontainable beast. That brought about the end of the Dofus Age and the start of the Wakfu Age by a brutal sea rise 200 years earlier.

Ogrest appears on a plan in Wakfu's episode 26 when Yugo fights Nox.

OVA: The Mount of the Dragons

The fight is titanic and risks destroying the world. Despite the power Yugo enjoys, he is not able to defeat him because Ogrest is supported by six dragons. Otomai, who knows his son Ogrest well, thinks that if he manages to enter Ogrest's belly to retrieve the Dofus, Ogrest will become harmless. This strategy pays off, he succeeds in

removing them from the belly of Ogrest who then resumes his appearance of child. Otomai apologizes for having abandoned his son and promises to keep him near him. Now that Ogrest is appeased, he wants to go back to live with his father. Before leaving, he confided his Dofus to the six dragons, asking them to ensure that nobody could use it.

Otomai decides to bring Ogrest back to the Sadida Kingdom. This is a very bad idea because the guard tries to stop it. Feeling rejected again, Ogrest is about to cry again. Fortunately, Elely (Tristepin's daughter) felt all the distress of Ogrest in her eyes and interposed to protect him. The King then renounces to stop him seeing that he is no longer a threat. Ogrest was touched by Elely's gesture as well as his wife and daughter.

It should be noted that one of the puppets that Kerubim uses represents Ogrest and its quest to obtain all the Dofus.

It will be noted that in the game, one can equip his character with equipments and the principal goal is to defeat Ogrest.

Ogrest is the main character in the MMORPG Wakfu introductory video. He recounts his quest for dofus and evokes Dathura without naming it. That in the game, you can equip your character with Ogrest's headdress.

Many cards bear the image of Ogrest. One will notice that one of them presents it while he is still a child and that his appearance is very different from that which he has in the episode out of series Ogrest the Legend.

Is remembered in some flashbacks of the first chapter, in how Daly faced him and lost his arm. At a point where Sadlygrove fights with Dark Vlad in second tower´s floor and does not seem to have the advantage of beating him, Rubilax tells him that the situation with Ogrest, was much worse.

When Oropo reveals his true acts, the others of his brotherhood, exclaimed that he was responsible for the Ogrest's Chaos, objecting that he did it for a necessary evil. Again it was mentioned, when Yugo returns to fight with Oropo. 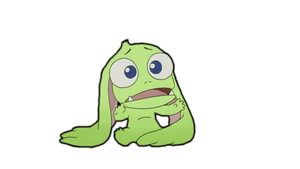 Ogrest as a little baby 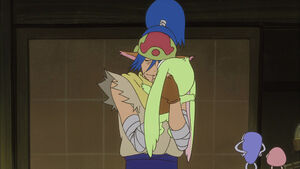 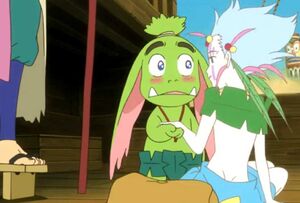 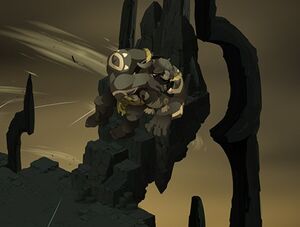 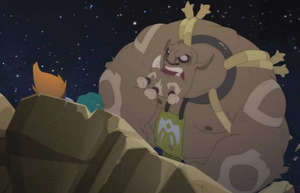 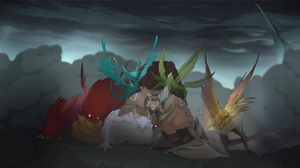 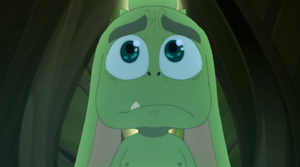 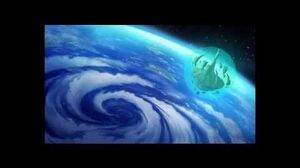