Oguma Corporation is a major antagonist organization in the 2006 PS2 video game Metal Slug 3D. This business company is led by Oguma, who is also the namesake founder of the company.

They ally with Donald Morden and the Rebel Army to build an army and recover the mysterious device known as the Alator. Because this alliance further strengthens Morden's military power, Marco Rossi, Fio Germi, Tarma Roving, and Eri Kasamoto set out to destroy both the Rebel Army and the Oguma Corporation.

They later betray Morden after they recover the Alator with their leader reveals himself as a member of an ancient race and attempting to use the Alator to rewrite the timeline so his race survives, at the cost of humanity. However, the plan is foiled by our heroes.

After his defeat, Oguma gives Rumi a data disc containing the history of his people so they can learn from his people's mistake. 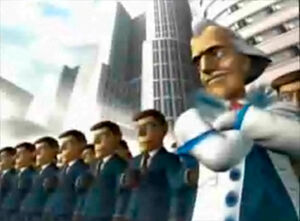