While carrying treasure, Starfy accidentally dropped the jar, releasing Ogura from his imprisonment. Ogura then used his magical powers to create a terrible storm and terrorize Pufftop.

At the end of the game, he is defeated by Starfy and re-sealed within the jar, though soon afterwards Starfy accidentally trips and knocks over 45 treasure chests. Until all forty-five treasure chests have been collected, Starfy will make the mistake of knocking over the jar and re-releasing Ogura.

In Stafy 2, Ogura creates the ten Puchi Ogura from two black orbs he dispenses from his nose. The Puchi Ogura escape from the jar and cause another storm to hit Pufftop. The storm knocks over the jar and releases Ogura. Ogura then kidnapped Mama Star as revenge for being trapped inside of the jar.

After defeating the Puchi Ogura, Starfy fought Ogura and once again imprisoned him within the jar.

In Starfy 3, Evil destroyed the jar, freeing Ogura permanently. Ogura then met with Evil, who gave him one last chance to conquer Pufftop. Evil then altered Ogura's appearance to make him stronger.

In this game, he is fought as the penultimate boss. After being defeated, Starfy and his friends proceed on to fight Evil.

When Starfy, Moe, and Starly reach Old Castle where Evil resides, they discover that in order to truly defeat Evil, they need to collect all forty-two Evil Crystals.

Despite only having forty-one, Starfy and friends confront Evil anyway. Things look bad until Ogura appears and reveals the last Evil Crystal, sacrificing himself to finally destroy Evil.

In the Starfy manga, Ogura is noticeably more evil. He lacks the sympathetic backstory, as Evil does not exist in this canon, and acts on his own accord. In his first appearance, he attempts to choke Starfy to death, establishing his more brutal character. 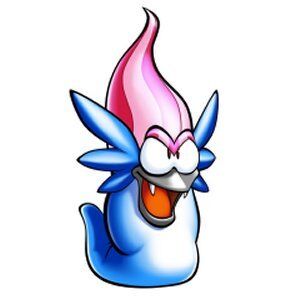 Retrieved from "https://villains.fandom.com/wiki/Ogura?oldid=4287104"
Community content is available under CC-BY-SA unless otherwise noted.