Manipulation
Hypnotism
Agility
Ability to pull off his tail

Disposing of everyone who stands in his way.

Ogura is the main antagonist of the 2002-2005 manga Densetsu no Stafy by Yumiko Sudō, which is based on the video game series of the same name. Unlike the regular games, Ogura is portrayed as a completely psychopathic villain rather than a slave to Evil.

Ogura was once an evil demonic eel who sought to take over all of Pufftop to claim its power for himself. When the world almost fell completely to his control, Papa Star and Old Man Lobster defeated the wicked overlord and sealed him away within a magic jar.

When Old Man Lobster comes under attack by Ogura, Starfy attempts to save Old Man Lobster, only for a large fish to appear and swallows Starfy. As Starfy falls down the fish's throat, he wakes up, revealing it to just be a dream. He tells Old Man Lobster about the monster that he saw, to which Old Man Lobster replies that they will not have to worry and shows him the jar containing Ogura. Starfy tries to make Old Man Lobster proud of him by cleaning the jar, only to accidentally drop it out the window, where it falls towards the Human World and into the hands of a boy named Takeo, causing him to drop his Game Boy Advance. Starfy and Old Man Lobster fall onto Takeo, thanking him for catching it, only for Takeo to attack them, refusing to give it back until they compensate for his Game Boy Advance and runs off.

Takeo takes the jar to school to show his friends, where Starfy and Old Man Lobster catch up to him, trying to explain to him about the evil within the jar. Takeo still refuses and runs to the roof of the school, where he trips on a loose floor panel and tumbles off the railing. Starfy and Old Man Lobster manage to save Takeo; however, the jar falls out of his hands and smashes against the ground, releasing 100 demons into the world, including Ogura. After centuries of magic wearing away his evil within the jar, Ogura is reduced to a simple speck, which Old Man Lobster warns Starfy and Takeo that Ogura will soon grow to power once he absorbs enough power.

Ogura would not appear again until the eighth and final chapter of Volume One, where Moe the clam is kidnapped by Doppel, one of Ogura's minions. In Doppel's hideout, Moe discovers that Ogura has almost returned to his true form. Ogura hypnotizes Moe, who returns to Pufftop and pretends to act normal, although Ogura is only using Moe to observe the condition of Pufftop.

Once Moe is released from Ogura's control, he warns Starfy that they might be in danger. Just when a replacement jar happened to be created to seal away Ogura again, the wicked eel arrives and attacks Pufftop. He causes mayhem across the kingdom before making his way into the castle. After fighting off the guards, Ogura is approached by Starfy and the new jar. Starfy is unable to use the jar, to which Ogura laughs and grabs Starfy, nearly constricting him to death. Meanwhile, Moe's incompetence in cooking causes the oven in the kitchen to explode, causing the jar to fall and begin sucking. Starfy tricks Ogura into going into the jar's range, resulting in the eel being sucked into the jar. Starfy is sucked into the jar as well, with Moe jumping in to rescue Starfy, only for his shell to get stuck on the jar's edge, allowing the residents to pull Moe and Starfy out.

A few days after Ogura had been sealed away again, Starfy has an argument with his parents about not working as hard as the guards, threatening to release Ogura from the jar. In frustration, Starfy tackles Mama Star, causing her to fall and break the jar. Seeing an opportunity knowing of Starfy's anger with his mother, Ogura kidnaps Mama Star and drags her to his castle. Feeling sorrowful for saying that he hated his mother, Starfy runs after Ogura to save her. While crossing the ocean to find his mother, Starfy and Moe find a videotape recorder in a bottle of Mama Star telling Starfy the location of Ogura's castle, only for Ogura to intercept the message.

When they reach Ogura's castle, the evil wizard welcomes Starfy and Moe to his castle and laughs as he sends his most powerful minion to kill them: a brainwashed Mama Star. Realizing he will have to fight his mother, Starfy attacks Mama Star, only for Mama Star to smack Starfy into a wall. Moe rushes to Starfy's side, only for Mama Star to beat him up. Believing victory to be his, Ogura realizes too late that Starfy uses the patched up jar to seal him away again. Mama Star returns to normal and reconciles with her son. The three celebrate by tossing bottles with tape messages into the sea, only for Moe to realize they accidentally put Ogura's jar in one of them.

Starfy is later able to find the bottle with Ogura's jar at a celebration party, accidentally cracking it against a table. Ogura pops out but is currently asleep. Starfy fits Ogura back into the hole and covers it with tape, only for the tape to fall off and Ogura's tail to pop out. After fooling Papa Star that the tail was food, Starfy spits it out, causing the jar to once again fall out of Pufftop, but a cloud manages to catch it. A strange man calling himself Shuuri-jiisan offers to fix the jar if Starfy finds him specific items from within six dangerous areas of the ocean. After navigating through the areas, Starfy and Moe gather the resources to fix the jar, leaving them in bad shape. Shuuri-jiisan fixes the jar, only to reveal himself as Ogura, who left behind the tip of his tail to trick Starfy into thinking that he was still in it. Meanwhile, back at the party, Papa Star makes a wish on two shooting stars, but the guards inform him that they were actually Starfy and Moe chasing after Ogura.

Arriving in a forest, Starfy and Moe meet the wise old tree Yugodorajii, who tells them that he saw Ogura go past a mountain, and might be the one responsible for cutting off one of his branches while he was asleep. As Starfy and Moe begin ascending up the mountain, they turn around and see Ogura flying above them with a torch, having set the forest on fire. Starfy extinguishes the fire, only to discover that Yugodorajii burned down. Starfy cries until a small spout appears from the ground, revealing himself to be a new Yugodorajii, having been born when Moe planted Yugodorajii's branch. Upon climbing to the top of the mountain, Starfy and Moe discover an evacuated town that Ogura terrorized by planting numerous landmines in preparedness to kill Starfy and the residents. With the help of Sir Hokwi and the Hokwi Group, Starfy and Moe disarm the mines.

Having unable to find Ogura, Starfy and Moe return to Pufftop, with Starfy worried that he will never be able to stop Ogura within the jar. When a Pufftop guard gives Starfy a longer jar, Ogura appears and knocks it out of Starfy's hands. Moe attempts to intervene but is simply pushed aside. Ogura takes the cork out of the jar and uses it to suck up Starfy. Inside the long jar, Starfy discovers that inside the long jar is a replica of the world, with the exception of any lifeforms. Ogura appears and taunts Starfy that everyone has died because of him and slaps him into the ocean towards spikes. Luckily, a rope from the real world ascends down to the fake world and grabs Starfy. Ogura attempts to chase Starfy, but a large void appears and drags him into it while Starfy is lifted outside the long jar. Once Starfy escapes the jar, Old Man Lobster tells Starfy that they no longer have to worry about Ogura now that he was dead.

Unlike the regular version of Ogura, his manga counterpart lacks any redeeming qualities to his character. Because Evil does not exist in this manga, Ogura does not appear to be acting on anyone's orders, rather his own accord to cause as much catastrophe as possible. He is shown to exhibit a more sadistic side as well, such as when he took his time stranging Starfy during his raid on Pufftop just to torment with the young star prince. 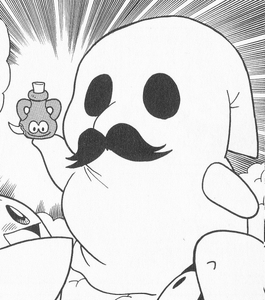 Ogura disgusing himself as Shuuri-jiisan.
Add a photo to this gallery

Retrieved from "https://villains.fandom.com/wiki/Ogura_(Manga)?oldid=3706218"
Community content is available under CC-BY-SA unless otherwise noted.