Have the witness who turned him in killed (unknown, likely succeeded)

The Ohio Demon is a minor character from the Hazbin Hotel universe who made his first (and so far only) appearance in the Helluva Boss pilot as one of I.M.P's earliest clients.

He is voiced by Brock Baker, who has also voiced Stolas within the same show.

The Ohio Demon is a sinner-class demon (former human), who in life learned that his wife was having an affair with a delivery man and murdered her for it. He attempted to hide her body without notice, but was witnessed by a jogging passerby. He was then caught by the authorities and then sentenced to death.

Clearly upset about his current situation, he contacted the I.M.P. company, who specialized in killing targets in the living world, to get revenge for him by killing the jogger who ratted him out. It is unknown if I.M.P. succeeded in this task, but it was likely they did. Even though this means that this particular client technically succeeded in his plans, he is still stuck in Hell (like all sinners), though given his violent nature, he seemed to take to his new existence fairly well. 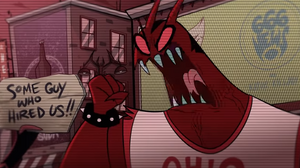 Ohio Demon angry about his past.