Ojo (We Can Be Heroes)

We Can Be Heroes

Member of the Heroics (formerly)

Drawing with her tablet.

Ensure the kids to complete their training to be the new Heroics (succeeded).

Ojo is the main antagonist of 2020 Netflix film We Can Be Heroes. She is an alien supreme commander of Planet Ogima who has a precognitive sense of drawing the future in her tablet and the daughter of Ms. Granada.

She was portrayed by Hala Finley.

Ojo is a young girl with brown eyes, wavy shoulder-length brown hair, and is usually seen in a white professional sweater. She carries her tablet everywhere.

At the beginning, Ojo is calm, shy, and quiet through the rest of the film when helping the kids to rescue their parents using her intellect with the tablet that is unmatched. Later on, she can finally talk and reveals to be an alien, which Missy and Wild Card already knew. At the end, Ojo isn't really evil and taking over Earth because she, Mrs. Granda, and her kind are training the kids to complete the test to be the New Heroics.

Ojo was born and raised on Planet Ogima, a planet where children are the leaders as opposed to the adults. She was appointed Supreme Commander and witnessed the fighting happening on Earth. She placed Neil Anami on Earth to infiltrate the government, making him President, and Ms. Granada was tasked with becoming the director of The Heroics. She settled with the children in The Stronghold in Heroics Headquarters, and took her identity as Ojo, a silent girl who draws what she sees.

We Can Be Heroes

At the beginning, Ojo remains quiet throughout most of the film while helping the kids to rescue their parents and stop the alien invasion.

Near the climax, she obviously talks and reveals to be an alien spy as well as a ruler of her kind who's responsible on invading Earth and kidnapping the Heroics that Missy and Wild Card already knew.

At the end, the kids fought off Ojo's fictional monsters and deactivate the rocket with the Heroics inside, foiling the invasion. However, their parents emerge from the rocket, and Ojo also reveals herself that she and her kind faked the "takeover" and trained the kids to be the new Heroics.

Unlike the superheroes with their powers, Ojo is an alien psychic that she has the ability to tell the future through her drawings. What she draws tends to come true within minutes of her drawing them. Her drawings always tell the truth of what is to come. She has the added ability to project her thoughts into reality via her drawings; such as aliens and monsters. She can control how large or small the projected images are. 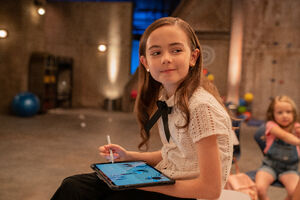 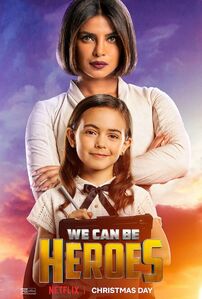 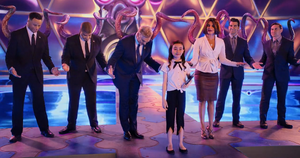 Aliens bowing down to Ojo.