Ability to create doors on the backs of anything

Draw attention to herself by interfering with the natural cycle of the four seasons (succeeded).

Deity
Okina Matara is the main antagonist of Hidden Star in Four Seasons, the sixteenth entry in the Touhou Project series. She is a god who uses her powers to disrupt the natural cycle of the four seasons, prompting the game's protagonists to locate and defeat her.

Okina has long blonde hair and yellow eyes, which take on a more orangeish hue in her Extra Stage portrait. She wears a white top, over which she wears an orange tabard covered in various constellations, the most prominent being the Big Dipper. She wears a green skirt and black boots, and on her head she has a tri-tipped hat.

In her Stage 6 portrait, Okina is sitting on a throne holding a small drum. Installed on the back of the throne is a back door with four flames coming out, each colored to represent a different season. In her Extra Stage portrait, Okina is floating, her throne is gone, and the door is now in front of her, facing the player, with the flame pointing in the same direction.

Okina is one of the sages who created Gensokyo, along with Yukari Yakumo, Kasen Ibaraki, and other unknown peers. She spends most of her time in the Ushirodo no Kuni ("Land of the Back Doors") while her subordinates Satono Nishida and Mai Teireida do all of the work she needs done.

At some point, Okina decides to seek out replacements for Satono and Mai, and sends them to plant doors on the backs of others to test their worth (Satono and Mai are never aware that they are seeking their own replacements). Many of the recipients of these doors are fairies, whose powers reach uncontrollable levels and cause the seasons to change suddenly in different parts of Gensokyo. This draws the attention of the game's protagonists, who eventually come face to face with Okina. After a fierce battle, Okina defeats the heroes by stripping them of their seasonal powers (the result of doors being placed on their own backs) and ejecting them back into their own world (through those same doors). This is not enough to stop the heroes, however; they acquire the power of Doyou, the time between seasons, and reenter the Land of Back Doors to confront Okina again. This time, Okina is unable to eject the heroes and is forced to fight them again. Although she loses the fight, she manages to achieve her overall goal of having others notice her. 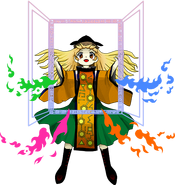