Marking Humans with their "kiss"

Listening to the play of her familiars

Oktavia von Seckendorff is the witch form of Sayaka Miki in the anime and manga series Puella Magi Madoka Magica. She briefly appears at the end of Episode 8 and battles with Kyoko Sakura in Episode 9. She also appears in one of the alternate timelines of Episode 10.

Oktavia appears as a monstrous, immense mermaid wearing heavy knight armor. Her helmet is somewhat reminiscent of an old deep diving helmet. Much like Sayaka herself, she wears a cape (though Oktavia's is torn and ragged) and wields a cutlass (proportionately massive). Her collar resembles a heart, which reflects the reason for Sayaka's fall, the same can be said of her fish tail.

Her barrier is filled with calls for attention - probably from Kyousuke Kamijou. Initially, the outer areas of her Labyrinth are filled with train tracks, perhaps a reflection of the train station where she became a witch. Later on, the entrance area becomes a long corridor filled with concert posters. The center of the barrier appears to be a distorted concert hall, where the seats fill the domed ceiling. Said concert hall is populated with a spectral string orchestra. Listening to it for too long can cause someone to lose their soul.

Despite Sayaka often being seen as a "weak" magical girl, Oktavia is one of the most formidable witches observed in the anime and manages to cause significant trouble to the powerful and experienced Kyoko, though she still falls far short of powerhouses such as Walpurgisnacht and the formidable Kriemhild Gretchen. The witch's weapons are manifested wheels, which she can use to crush enemies. She also wields a huge cutlass, similar to the one she had in her Puella Magi form, but scaled to her enormous size. Oktavia can also use her massive size to grab enemies and crush the life out of them, though this doesn't seem to be very effective considering that she fails to inflict any significant damage on Madoka before Kyouko retaliates. The witch seems to act peacefully as she doesn't attack until an intruder disturbs the play of her familiars.

Kyouko and Madoka attempt to call out to Sayaka while fighting the witch, but this is completely unsuccessful, as the witch is not really Sayaka, only the darkest emotions in Sayaka's heart given physical form. She is eventually defeated when Kyouko Sakura chooses death over a life without Sayaka and destroys her own Soul Gem (thus killing herself) in a detonation of energy that also destroys Oktavia.

Upon becoming part of the Law of the Cycles as Madoka's assistant, Sayaka apparently gained the ability to summon Oktavia Von Seckendorff, who now assists her in battle. Thanks to her gigantic size, the mermaid knight can battle Homulilly on equal footing. Oktavia is now able to summon minions from other Witches, notably Gertrud's Anthonies, she has also been seen wielding a massive version of Kyoko Sakura's spear, symbolizing the deep bond between Sayaka and Kyoko. Sayaka can summon Oktavia only if there is a significant amount of water nearby. In the absence of water, she can stab herself to summon Oktavia out of the resulting pool of blood. 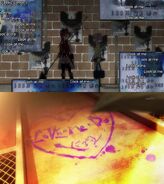 The subtle messages show her eagerness for attention.
Add a photo to this gallery 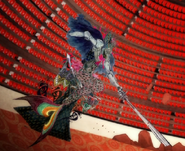 Oktavia in Episode 10.
Add a photo to this gallery 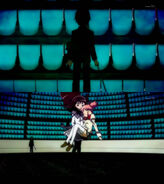 A violinist that resembles Kyousuke.

Oktavia's familiars (Klarissas), which resemble Hitomi, in an alternate timeline
Add a photo to this gallery

Mahou Shoujo Madoka Magica - Official OST - Symposium Magarum
The battle against Oktavia is set to a unique theme not heard anywhere else throughout the anime.
Add a photo to this gallery

Retrieved from "https://villains.fandom.com/wiki/Oktavia_von_Seckendorff?oldid=3609615"
Community content is available under CC-BY-SA unless otherwise noted.