Anti-Villainous Warlord
Olaf is the Commander-In-Chief of Blue Moon and an antagonist in the first Advance Wars game. He at first appears to want to invade the nation of Orange Star until it is revealed that he was deceived by Black Hole into declaring war on them.

In Advance Wars, Olaf is tricked into declaring war on Orange Star by Clone Andy who impersonated the Orange Star CO Andy and led an attack on the Blue Moon forces. Taking advantage of the situation, Olaf declares war on Orange Star and uses it as an opportunity to invade the nation and conquer more land for Blue Moon. However, after it is revealed that he was deceived, he and the rest of Blue Moon team up with the other forces to defeat Black Hole.

In Advance Wars 2: Black Hole Rising, Black Hole forces under the command of Lash invade Blue Moon and raze Olaf's home town in the process. However, Olaf and his forces manages to repel Lash and her troops, forcing them to retreat.

In Advance Wars: Dual Strike, Olaf has little role in the main campaign of the game, having stayed in Macro Land to help his country recover. However, a clone of him created by Black Hole appears in one of the later missions to fight the Allied Nations COs.

In Super Smash Bros. Ultimate, Olaf appears as one of the game's spirits. A Novice-rank Shield-type spirit, he gives no effect upon use. In his spirit battle, the player must fight an Ice Climbers on the Battlefield form of Summit, with the fight also having the Ice Climbers start with a Steel Diver, the floor being frozen and the player becoming slower after some time.

Olaf is shown to be incredibly greedy. In the first game, he is only concerned with land and power. He is also shown to be a rather incompetent commander in the first game. He forgets to fuel his air units, and uses his Battleships to fend off Submarine attacks, leaving his base wide open for attack.

As time goes on, however, Olaf grows to become a responsible leader and it's shown he actually does care for his men. He is also shown to be an excellent strategist in later games. 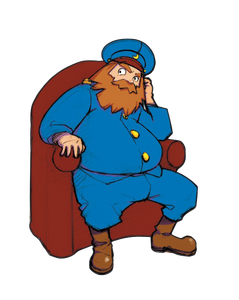 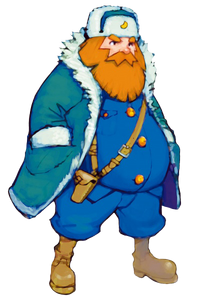