Leader of the Vikings

Stealing stuff from the Monks from the monastery (formerly).

Steal stuff from the Monks from the monastery to make their wives happy (formerly).

Olaf is the main antagonist of the VeggieTales episode Lyle The Kindly Viking. He is the leader of the Vikings, the rulers of the seas, and always stole many things from the Monks from the monastery. However, when he and the Vikings realize Lyle, their fellow viking, makes friends by sharing, they redeemed themselves and became friends with Lyle.

Being played by Mr. Nezzer, he was voiced by Phil Vischer, who also serves as one of Big Idea Entertainment's founders.

Olaf and his Viking members stole stuff from the Monks from the monastery to make their wives happy. He and his wife, Mable see Lyle, Olaf's fellow viking. Olaf tells Lyle that he missed another raid, and Lyle says he was making potholders. Olaf gets confused by Lyle's actions, saying that he does not fit the style of the Vikings.

The next day, Olaf and his Viking members went out to raid the monastery once again, Ottar and Sven, two of his Viking members spot Lyle on the monastery. They knew if Olaf knew what Lyle was doing, he would be in big trouble. Ottar tried to distract Olaf by saying that there is a fish with a bunch of pretty colors all over his scales. Sven also tries to distract Olaf by telling him that there is a turtle wearing pink pajamas while riding on a llama and chasing a herd of giant squid. However, Olaf does not believe them, before he discovers that Lyle gave the Monks the potholders and the bag of loot the Vikings gave him. Olaf gets angered by this, as a big storm blows up.

Olaf catches up with Lyle, asking him what he was doing. He then starts tearing the sails on Lyle's boat, and says that he needs to make an "example" out of "this ex-viking", before he throws away Lyle's oars. He then goes back to his boat, leaving Lyle drifting away in the sea. A huge wave, brought up by the storm, knocks over the Vikings' boat, and the Vikings fall into the sea. Another wave knocks over Lyle's boat, and Lyle falls into the sea as well. The Monks save Lyle, and when the Vikings see this, they realized Lyle's actions were right. Lyle persuades the Monks to save the other Vikings as well, and the Monks agree with him. The Vikings thank Lyle for saving them from the sea, and promise to share from now on.

Olaf is cruel and greedy. He and his Viking members like to steal things from the Monks, just to make their wives happy. He gets angry when he discovers Lyle giving things back to the Monks, though he later realizes that Lyle was right to share, and redeemed himself, being friends with Lyle. 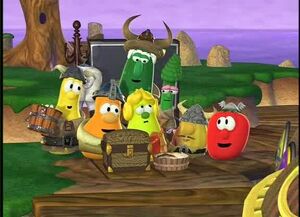 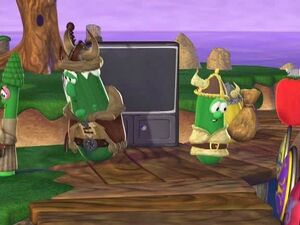 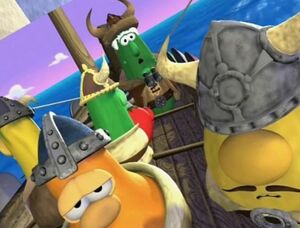 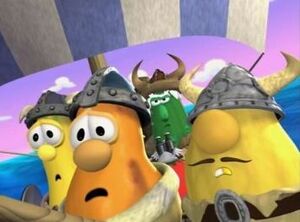 Olaf and his Viking members shocked when they realize Lyle has gone against the code of the Vikings by giving the Monks their stuff back. 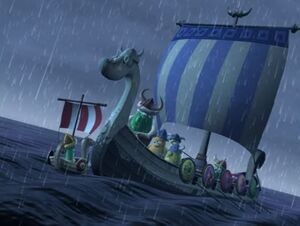 "Well, now there's a storm a-brewin', and you're the one that's under attack!" 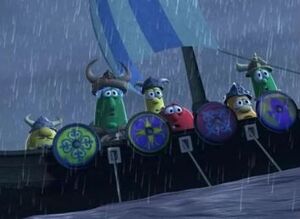 Olaf and the Vikings look in terror as a wave knocks over their boat. 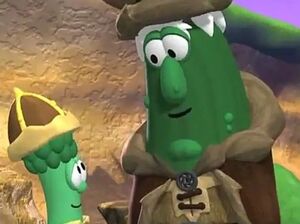 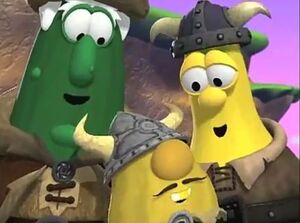 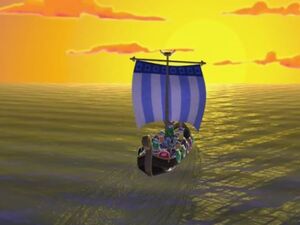 The story ends with Olaf, the Vikings (including their wives and Lyle) sailing with their boat.