Shaman and Elder of the Dathomir Witches

Old Daka is a minor antagonist in Star Wars: The Clone Wars. She is the oldest and wisest of the Nightsisters who lived on the planet Dathomir during the Clone Wars.

She was voiced by Kathleen Gati.

As an Elder of the Dathomir Witches, Daka had great knowledge of the arcane magicks and was considered wise amongst her sisters. During her time she lived in solitude within the Nightsister fortress while the Clan Mother Talzin lead her coven of spell-casters. Daka's secret lair was hidden in a cave that could only be opened with a spell.

Harboring a grudge against the witches for the attempt on his life, Count Dooku launched a Separatist attack on Dathomir to wipe the Nightsisters out. The Droid Army led by General Grievous quickly outnumbered the Sisters and Mother Talzin quickly retreated into the depths of the lair and called upon Old Daka for assistance. With her mastery of ancient magicks unparalleled, Daka cast an incantation that conjured an undead horde of Nightsister zombies from their burial pods to fight the battle droids.

Although her powerful magicks helped, the Separatists quickly overwhelmed the Sisters. Feeling the curse of Mother Talzin upon himself, Dooku ordered Grievous to stop the witch and told him to follow the witch's magic as it appeared as green mist. The general entered the fortress and destroyed the entrance to the hidden cave where the Sisters were performing their spells. Grievous killed the old crone who while conjuring the spell, Daka could not defend herself and was slain by the general's lightsaber. With Daka's death, the spell faded and the Nightsister zombies quickly collapsed returning to their death state.

It is later revealed dying Daka sent the Nightsister Yenna off-planet in an escape pod. The rest of the Nightsisters were all but destroyed because the spell required an active caster except for Talzin who fled into the spirit realm seeking vengeance and Asajj Ventress who disappeared into the east. After the battle ended, a Dathomir witch named Falta arrived to search for her daughter Yenna and found a dying Daka. Before passing away, Daka told her that Yenna had been sent off-world.

Old Daka was very wise as she had knowledge of forbidden magicks such as the Chant of Resurrection. She was considered more stronger then the shaman Talzin since she seeked her help when the invasion happened to use her spell against the droid army. Although very wise and powerful, Daka could not defend herself from Grievous because she was casting the spell which all her energy went into and succumbed to his lightsaber blade. 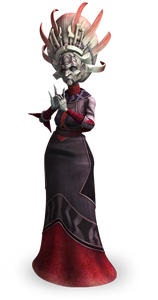 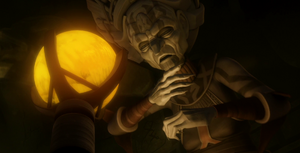 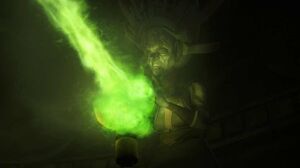