King of the Demons

Resting among the bodies of his kin.

Kill the Ashen One (failed)

The Old Demon King is a minor antagonist and optional boss in Dark Souls III. He is the former King of the now-extinct Chaos Demons.

The Demon King was born of the Chaos Flame like all of his kin, the Flame being an attempt by the Witch of Izilath to create a substitute for the quickly fading First Flame.

Created using the Witch's soul, the Chaos Flame was capable of only twisting and mutating life around it, the creatures were the ancestors to what would be called the Demons.

The King himself is among the last of his people, for by the time of Dark Souls III the Chaos Flame is gone, effectively making the Demons a dying race.

Supposedly having risen to his rank through strength and intelligence, when encountered by the Ashen One, the King is but a shell of his former self, found resting amidst the corpses of his fellow Demons, though who or what killed them is unknown, and if the King is responsible, his reason behind it remains a mystery.

Nonetheless, once he takes notice of the Ashen One, the King shall rise, using what little is left of his once-great power to combat the intruder, but as he is nearing his defeat, the King will unleash one final, massive blast of fire, this sapping him of all of his strength.

Now unable to even stand, let alone raise his mighty hammer, the Demon will barely if at all attempt to defend himself, only giving weak, halfhearted swipes of his claws until at last struck down.

The King is one of the few Demons left in existence and is also one of the oldest. He perhaps rose to become King due to being among the strongest of his kind and seems to care for his fellow Demons, for he can be found laying amongst the corpses of dead Demons, seemingly in mourning, growing angered when he takes notice of the Ashen One.

When he reaches critical health, the King will release a blast of Chaos Fire in a desperate last attempt to kill the Ashen One. With the last of his flame gone, the King will stop fighting the Unkindled, for he lacks the strength to do so, instead remaining knelt with his head bowed in apparent acceptance of his defeat and shall remain like this until killed.

Much like the other Demons encountered in Dark Souls III, the king is a towering beast, with a broad torso and thick, sturdy limbs, his body comprised of a grey material akin to stone or bark. What makes the King unique, however, if the fact that his horns are much larger, resembling a multitude of tree branches, the same protrusions jutting out underneath his chin like a thick beard.

Wreathed is orange fire, the King walks with a noticeable hunch, only one of his eyes glowing, the other black and dark, as though it no longer works. As the Ashen One battles him, the King will begin to glow brighter and brighter, until it abruptly fades, leaving the King appearing shriveled and weak.

Being a creation of the Chaos Flame, the Demon King utilizes fire in most of his attacks. Although slow, the King makes up for this through strength and Area of Effect attacks, lashing out with large, sweeping swipes of his great hammer, able to launch blasts of heat through his hands and mouth.

He may raise his weapon skyward, waving it in slow circles. This is the herald to a storm of flaming rocks he rains down. As well, The King may find the strength to rise to his full height, slamming the head of his weapon into the ground, causing rings of flame to be thrown out like shockwaves to knock foes off balance.

When he nears death, the Old King will charge all of his remaining fire into one last violent explosion, but by doing so, he uses up all of his energy, resulting in him being unable to continue fighting. 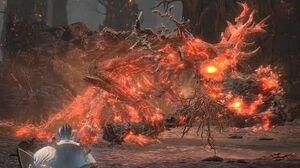