The Old Gods, sometimes also known as the Low Elder Gods, are an overarching antagonistic faction of the universe of the SCP Foundation.

They play a major role in "Verse of an Endless Song", "Competitive Eschatology", and "The Trashfire" canons.

(Note: Due to the SCP Foundation-universe having no official canon, the Old Gods are a very loose concept within the mythos, though subtle connections exist in different tales and articles.)

Inspired by the Great Old Ones from H.P. Lovecraft (though also being based on real religions, myths, and folklore), the Old Gods are a loose pantheon of eldritch deities and among the most powerful beings in the multiverse, usually being beyond the comprehension of humans in terms of scale, power or motivation. Despite, unlike their Lovecraftian inspiration, it appears that humanity can, at least sometimes, hold up against the Old Gods.

An example for this is SCP-2845: The entity came to Earth on a comet and started to cause havoc, but with much effort, the Foundation, with the help of the Global Occult Coalition and at least another occult organization managed to contain the being with a six-step ritual.

The attitude towards humanity also varies from deity to deity. Some seem to have the interest to improve mankind (Mekhane), while others appear indifferent about them (SCP-3000), and others want to conquer and/or destroy all life (Scarlet King).

The Old Ones also have alliances and conflicts among themselves: Mekhane and Yaldabaoth appear to be opposite enemies, while many lesser gods, like Jeser or the Hanged King, serve stronger ones, such as the Scarlet King. It also speculated that Yaldabaoth for example is the aunt/uncle of the Scarlet King.

It is believed by certain cults, such as Sarkicism or the Chosen of God, that the old gods created the universe. The most well known gods are actually part of the Low Elder Gods as they are way less powerful than the High Elder Gods, similar in a way to the comparison between the Great Old Ones and the Outer Gods, being superior to the Brothers Death which are superior to the Low Elder Gods.

However, in other continuities the gods are depicted as not being physical ancient beings, but instead ideas which had come to life after humanity began believing in them, similar in a way to Tulpas. These gods in fact inhabit the noosphere, the human collective consciousness, in which they were created as a result of humanity, as seen with the Scarlet King, the Serpent, Mekhane/WAN and possibly SCP-682 and SCP-3125. The gods that appear directly to humans are in fact their physical projections as the gods don't possess a true form and cannot directly interact with the normal physical world, requiring worshipers and/or avatars in order to exist and affect humanity and the world.

In one tale, the Hanged King was able to achieve apotheosis only after his Ambassador convinced his entire Kingdom that after his death he would become a god following the numerous sacrifices he did. The same also happened to SCP-3000 which was originally just an abnormally large eel that became the Hindu god Anantashesha after a large number of people believed they were the same being. The Xia Dynasty believed that this was the case for the gods, their worship causing the manifestation of the gods, meaning that humanity and its beliefs are responsible for the creation and the manipulation of the gods, even retroactively changing the past to make those gods appear as if they always were there despite the truth.

Referred to as an Old God

Associated with other Old Gods

A Sarkic interpretation of an Archon or "Old God". 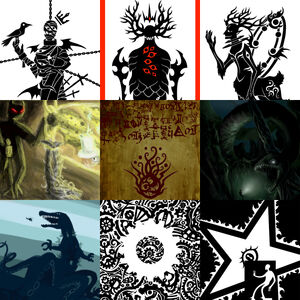 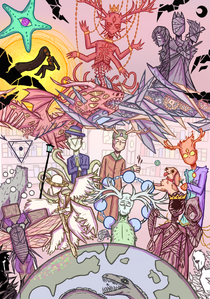 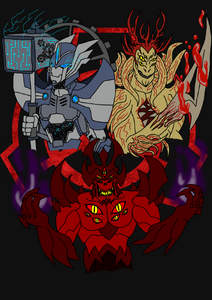 Mekhane, Yaldabaoth and the Scarlet King. 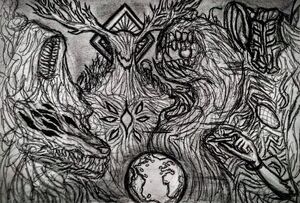 The Verdant Mage, the Scarlet King, the King Worm, and the Unseelie Queen. 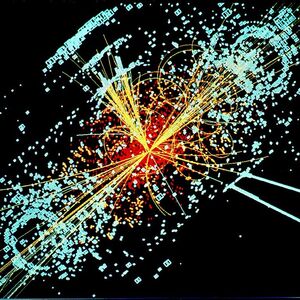 The memetic construct of a god within the noosphere as seen in SCP-6659. 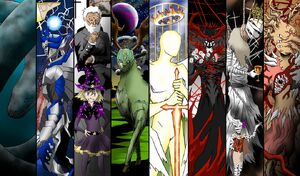