The Old Lady Army, otherwise known as The Old Ladies With Purple Dresses and Red Hats is a gang of one-time villains from the FOX animated sitcom, The Cleveland Show, only appearing in the episode "Field of Streams". They are a gang of villainous old ladies, who hang out at the mall and get into fights with Cleveland Brown and Terry Kimple.

In "Field of Streams", Cleveland got the idea to revamp the currently closed down baseball field at Stoolbend High School. He asked Terry if he was thinking what he was thinking, but Terry was apparently not, as he thought he was thinking about getting into a fight with the old ladies with purple dresses and red hats at the mall. Cleveland laughed at the ridiculousness of this silly idea and tried denying it, but now that Terry put the idea in his head, he started to like the idea and would not be able to get his mind off of the idea, until he actually went forth to enact the plan. Cleveland took a slight detour, so that he and Terry could get into a huge fist-fighting brawl with the old ladies at the mall.

At the mall, Cleveland and Terry faced the entire army in hand-to-hand combat, punching and kicking the crap out of each and every single one of them. The old ladies were frail and decrepit enough to go flying through the air, knocked out cold, quite possibly killing a portion of them, after a single strike from their opponents. This didn't stop and entire herd of them from crowding around the duo and trying to take them down. Cleveland grasped one of the old ladies in a strangle hold and squeezed her dentures out of her mouth. Just then behind him, another old lady took out a dagger and stabbed him in the back. Cleveland kicked this old woman over and removed the dagger from his person. He then threw it across the room and toward another old lady, who currently had Terry caught in a strangle hold. The dagger got lodged in the old lady's forehead and she dropped dead, letting Terry go. The old lady, who had the dagger before, revealed that she wasn't completely unconscious, when she pulled a gun on Cleveland, but before she could shoot it, Cleveland grabbed her hand and karate chopped her in the arm, snapping it in half and making her drop the gun. This was the last we saw of the fight, before cutting back to the actual plot of the episode.

Later on in the episode, Cleveland was dismayed to hear that Junior had no interest in playing baseball and stupidly asked himself how any of this could get worse, just asking for the rules of comedy to bring about the tempting fate unto him. Right on cue, Terry comes nervously backing up into him, and after bumping into him, Cleveland turns around and is even more terrified to see the gang of old ladies with purple dresses and red hats again. Now, they are standing up and are ready to kick their butts, with the leader of the gang, holding a baseball bat. Cleveland says "Oh, shit." and the show cuts to commercial, with the aftermath of the situation being unheard, but implied as the old ladies getting their revenge and winning victoriously.

The old lady army consists of a countless number of female senior citizens, all of which are white and have either gray or brown hair. Like their name suggests, they all wear color-coordinated clothing. Due to saving animation and character designs, there are only three character bases, all of which are multiplied, to make their gang look bigger. The clothing attire of the old ladies is mainly along the lines of having red brim fedoras with either pink or purple ribbons, creating a stripe around the base. If the ribbon is purple, a faux flower will be on there and if it's pink a bow will be on there. And their dresses are either bright purple old lady gowns or sweaters. One of the old ladies, however, doesn't have a purple dress. Rather, she has a pink shirt and a purple skirt.

The old lady army is surprisingly robust for a bunch of decrepit, senile, old hags. They are fierce warriors and they can still get back up, no matter how painfully they've been brought down, that is, if they survive. They are easy to kill, but they are also many, so fighting with them is a pretty fair game. 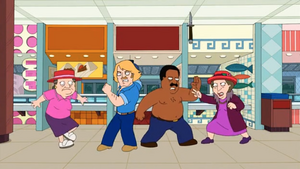 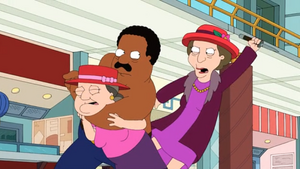 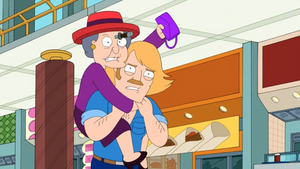 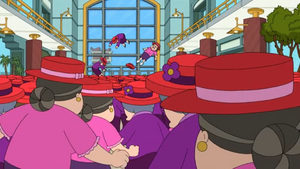