Kidnap the female tree for himself (failed)

The Old Man Tree is the main antagonist of Disney's Silly Symphony 1932 short "Flowers and Trees".

The Old Man Tree was a nasty looking hollow tree designed, as his name would imply, to look like an old man (though its model sheet makes it clear that he shouldn't look too human).

Very girthy and thick, and larger and far less livelier than the other trees in the short, the Tree houses several black bats and a green snake-like lizard which represents his tongue. He was accompanied by two vultures at the beginning and end of the short.

When uprooting himself from the ground to walk about, his roots took the shape of two stubby legs.

The Old Man Tree seemed to enjoy the company of the lizard in his mouth but scared away everything else that was near him, be it other animals or other plants. His desire to kill the male and the female trees became so great he didn't care about the lives of everyone in the forest.

As Spring arrived, the Old Man Tree awoke alongside the other trees, though unlike them he didn't partake in any celebration, ignoring all the music and dancing the flowers, animals, mushrooms and trees were doing. He merely scared away a nearby bird and the vultures that were resting on him. Likewise, with a yawn, he let out several bats inside of him, intentionally or not.

It wasn't until a beautiful female tree approached him without knowing, that he decided to make a move. As he grabbed her the second time she got near him, a healthy and young male tree who had been wooing her placed himself between the two. As the two trees grabbed a stick and a branch to use as swords, the male tree defeated the Old Man Tree, knocking him unconscious for a few seconds. A calla lily flower sat on the Old Man Tree's chest, declaring him dead, but he immediately got up, grabbing the flower and throwing it at the ground. The lily proceeded to run away, mocking him as it stuck out its spadix like a tongue.

The Old Man Tree decided to get his revenge by starting a fire with a large branch and a log and throwing the branch, now set aflame, at the male and female trees. The male tree was unable to put out the fire and it began to spread across the forest, scaring all the other trees who fled in terror. Plants and animals hid or cooperated to extinguish the flames, and as the Old Man Tree joyfully watched the fire surround the male and female trees, the flames snuck up behind him and surrounded him as well.

The birds pierced the clouds full of water and allowed them to rain down on the forest fire, eliminating the threat. When all the flames were gone, all that was left of the Old Man Tree was his burnt body, laying alone as the vultures from earlier circled him and the trees around him looked at him with sadness or judgemental looks.

Befitting his cruel and aggressive nature, the Old Man Tree relied purely on brute force to take what he wanted or intimidated those he didn't want standing in his way. He smacked the young male tree several times with a branch but was ultimately beaten by the young tree's superior skill.

When pure physical strength wasn't enough, the Old Man Tree relied on his cunning, starting a fire (with a branch and a log) that would consume his enemies. Unfortunately, he became too focused on his revenge and wasn't able to notice how the fire also greatly threatened him. 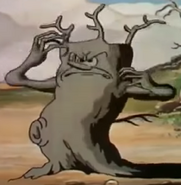 The Old Man Tree scares away a bird

The Old Man Tree tries to kidnap the female tree