Many unnamed Old Ones

Invading and conquering worlds, forcing other worlds' peoples into worshipping them.

Demanding "editable" tribute and offerings including sacrifice in return for their favors.

To be forever worshipped and obeyed by all the conquered worlds in the universe under their command (failed).

Evils from the Past

The Old Ones are an ancient race of extra-dimensional god-like monsters and the main antagonists of the episode "The Terror Beyond" of Justice League cartoon series and they are enemies of the Justice League.

The Old Ones were a group of extradimensional creatures that are evil beyond comprehension. Mightiest among the Old Ones was Ichthultu. Due to their appearance and power, they were often regarded as gods whenever they crossed dimensions and conquered their inhabitants who later recieve "favors" from the Old Ones in return for worshipping them.

When Earth first came to be in the universe, it was came upon and inhabitated by the Old Ones from their twisted dark homeworld of Relex who were referred to as the original demons and ruled the planet for countless eons. It is believed they formed the first known civilization and supplied their slaves with knowledge of agriculture, mathematics, and philosophy. Their leader was the most powerful of them all, Icthulthu. Their reach expanded across the universe, even to the distant planet Thanagar whose very people were but a primitive species before they gained favors and riches from Ichthultu in return for their praise of and their offerings (including sacrifice) to him before centuries later the Thanagarians finally rejected him and cast him and his kind away from their world. An unspecified source banished the Old Ones to a parallel reality they originated from. They once breached the boundaries between realities and attacked the once glorious island city of Altantis. The sorcerer king at the time, Poseidon, focused the planet's mystical ambient energy that powered the spells which protects Atlantis from sinking, into the Trident and banished Ichthultu and the Old Ones back where they belong. With the planet's magic drained after King Poseidon's battle with the dreaded Old Ones, Atlantis's spells failed and it sank into the ocean.

Generations later, the boundaries between dimensions became weak again and Old Ones began to travel to Earth again. Dr. Fate allied with Aquaman and planned to use Solomon Grundy to repair the fissure. In the meantime, Superman, Wonder Woman and Hawkgirl realized their connection with the realm of magic when he was injured and Hawkgirl's mace was a suitable weapon against them. In search of answers in the Tower of Fate, the League interrupted Dr. Fate's spell. The Old Ones rushed through and Atlantis' army fought a valiant battle and drove them back into their dimension. Superman, Wonder Woman, Hawkgirl, Dr. Fate, and Solomon Grundy elected to enter the dimension and defeat the Old Ones once and for all. Their journey ended when they were found by Icthulthu. Grundy and Hawkgirl destroyed it as the others resealed the fissure with the Trident of Poseidon. 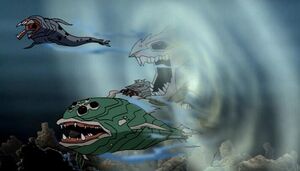 The Old Ones are entering the Earth's oceans through a interdimensional rift between the worlds.
Add a photo to this gallery

Retrieved from "https://villains.fandom.com/wiki/Old_Ones_(DC)?oldid=3716556"
Community content is available under CC-BY-SA unless otherwise noted.