Ruler of the Kingdom of England

Kill the wolves off of the forest.
Kill Robyn and her father Bill for defending the wolves and the Wolfwalkers (all failed).

Oliver Cromwell, also known as The Lord Protector, is the main antagonist of Cartoon Saloon's 4th film Wolfwalkers. He is a wolf hunter and Robyn Goodfellowe's archenemy.

He was voiced by Simon McBurney, who also played Kreacher in Harry Potter and the Deathly Hallows - Part 1 and Atlee in Mission Impossible.

Oliver Cromwell is the lord protector from England and comes over to Ireland where he become ruler of Kilkenny; there, he assigns a wolf hunter, Bill Goodfellowe, to help exterminate the wolves so the woodcutters can continue their work unimpeded. However when Goodfellowe's daughter Robyn was seen outside of Kilkenny, the Lord Protector scolds her for not working in his scullery and gives Bill two days to kill the wolves while he attends to matters further south.

When Robyn is working in the scullery on Cromwell's orders while the Lord Protector is away, she comes across a cage in his chambers. Before she can investigate further, she is ushered out by a maid. When Robyn returns in wolf form after having been turned into a Wolfwalker by her new friend Mebh, Robyn discovers that Cromwell has captured Mebh's mother, Moll, and barely escapes when the Lord Protector discovers her. He shoots at her, thinking she is merely an animal, but fails. From there, the angry Cromwell plans to restore control of the town by showing the townspeople he can tame the wolf he's captured, and by extension, nature itself. He ignores Robyn's pleas to let Moll go and demotes Bill to a foot soldier for failing to eliminate the wolves when she tries to intervene in human form.

Later, Cromwell presents the captured Moll before the townspeople, trying to garner their support by taming Moll. An enraged Mebh attempts to free her, and when Bill restrains her, Moll bites him. Mebh flees, but she vows to return with her pack to rescue her mother. The enraged Cromwell orders Bill to kill Moll, and leads his army to burn the forest down. Robyn protects Moll from Bill's attempt to kill her, then frees and reunites her with Mebh before she and her pack can attack Kilkenny, earning Mebh's forgiveness. Bill follows them and shoots Moll with an arrow out of fear, causing Moll's wolf form to become a spirit and return to her human form in the den, with Robyn, Mebh, and the wolves following it. As Bill laments what he's done and cradles Robyn's sleeping body, Cromwell and his army arrive, chaining Bill in shackles and begin razing the forest. As Mebh works to heal a grievously wounded Moll, Robyn and the pack stall the soldiers, attacking them and driving the vast majority of Cromwell's forces away. Mebh summons Robyn and her pack back, realizing she needs them present to heal Moll, but Robyn is knocked unconscious after disabling the army's cannon and causing the rest of the men to flee.

By this point only Cromwell remains to fight and proceeds to try and kill Robyn's wolf form as she lies injured at the base of the waterfall where Mebh and her mother make their home. By this time, he now realizes the Wolfwalkers are real and devolves into madness, desperate to eliminate this affront to his religion once and for all. Before the Lord Protector can kill Robyn, Bill, due to Moll's bite, transforms into a wolfwalker to protect Robyn and overpowers the Lord Protector in his wolf form, breaking Cromwell's sword. As Cromwell attempts to shoot Bill after seeing his human body is vulnerable, his gun is shot away by Robyn using her father's crossbow, and Cromwell makes a desperate last stand with his dagger near the entrance to the pack's lair, only for Bill to knock the dagger away and begin biting through his armor. Rather than let Bill kill him, Cromwell commits suicide by falling into the sharp rocks at the base of the waterfall, his last words being to beg God to take his soul to heaven.

Oliver Cromwell is the Lord Protector of Kilkenny and Ireland, a proud and inflexible man virtually devoid of compassion, sympathy, understanding, and intolerant of anything or anyone that questions or threatens his authority.

An overtly religious man, he is extremely self-righteous and believes he acts in accordance to the will of God in spreading order and taming the wilds, a representation of the disorder and strife he hates and will not allow in the land that is his protectorate. However, this is is little more than twisted delusions of a fanatically devout tyrant. He has no patience for children and would rather put them to work than allow them to run wild and misbehave, and he has no qualms threatening them to get back in line with his authority lest they suffer his wrath.

Due to his religion and his fanatical devotion to his beliefs, he abhors anything he considers to be pagan nonsense though after realizing the mystical wolfwalkers are real, he declares their abilities to be witchcraft and that they must be destroyed, showcasing his fear of the unknown and his paranoia.

In his final moments, the Lord Protector chose to take his own life rather than die at the fangs of Bill Goodfellowe, who had become a wolfwalker, and the Lord Protector allowed himself to fall to his death even though suicide is a sin in accordance to his religious beliefs, though he hearkened his soul to the Lord with his final words, and the only remorse he expressed was failing in his duty. 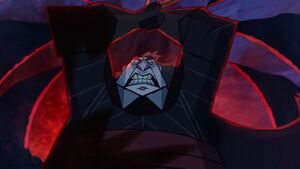 Oliver Cromwell's breakdown as he attempts to finally kill Robyn. 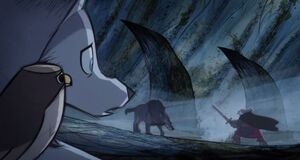 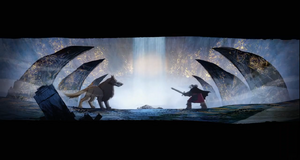 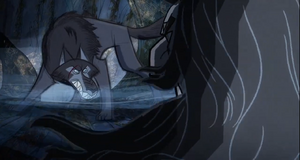 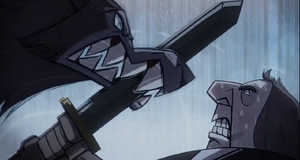 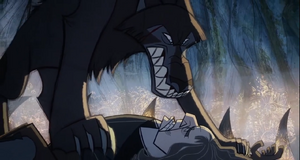 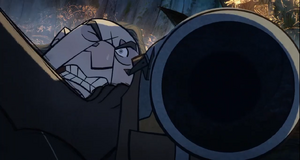 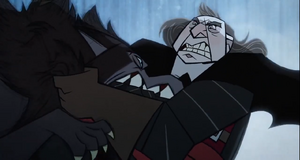 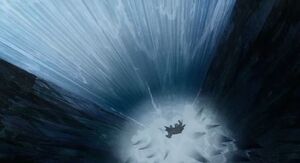 Oliver Cromwell's death.
Add a photo to this gallery

Retrieved from "https://villains.fandom.com/wiki/Oliver_Cromwell?oldid=4314771"
Community content is available under CC-BY-SA unless otherwise noted.