Olivia is a supporting antagonist in the 2013 sequel Evil Dead.

A registered nurse and best friend of Mia Allen, Olivia is possessed by a Deadite, causing her to attempt to kill her friends. Olivia takes the role of Shelly from the original film, The Evil Dead.

She is portrayed by Jessica Lucas, who also portrayed Tabitha Galavan in Gotham.

She and Eric were both around to experience Mia's first overdose (something not even her own brother was aware of until the cabin trip), and she was the most adamant on forcing Mia not to return home as she feared for her health. She has a background in medicine and is very confident in her treatment abilities, convincing David and the group that Mia was in capable hands with her after the latter crashed a car in the thick bog.

When Mia escapes from the cabin in a vain intent to avoid the demon that was after her, Olivia and David find her curled up by a tree and bring the girl back to the house. Olivia treats Mia’s wounds and is reluctant to take her to a hospital. After Mia becomes completely possessed and shoots David in the arm with a shotgun that is found in the cellar.

Olivia tries to take the gun, but Mia grabs her, overpowers her and begins to vomit red fluid on Olivia’s face, infecting her. Later, a scared Olivia washes her face and sees her demonic reflection with an open Glasgow smile. Olivia backs away from the mirror and walks to the door which is opened by an unseen force, where she’s stopped cold in her tracks by an unseen force, and unable to control her muscles, urinates on herself.

Olivia becomes totally possessed after that and cut off a chunk of her cheek into what looks like a Glasgow smile. She tries to kill Eric in the bathroom with a broken piece of glass, but he takes a piece of broken toilet and bashes her on her head until she no longer moves.

Unlike Mia and Natalie, she did not show any signs of intelligible speech after becoming a Deadite although this is likely because she was killed by Eric not long after her possession. 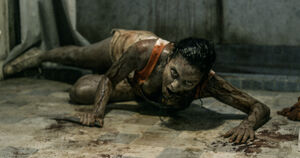 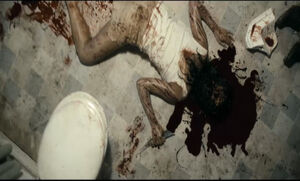 Olivia's corpse after Eric killed her.