Rule the future as King.

He is the reason that most of characters travel back in time, either in order to stop him by eliminating Zi-O or preventing Sougo from becoming Zi-O, like Geiz, Tsukuyomi and White Woz, or coronating a person other than Sougo to be Oma Zi-O, like the Time Jackers.

He was voiced by Rikiya Koyama, who also played Kagetane Hiruko, Giovanni in Pokémon Origins, Kiritsugu Emiya, Kamen Rider Bujin Gaim in Kamen Rider × Kamen Rider Gaim & Wizard: The Fateful Sengoku Movie Battle and Paradox Roidmude in Kamen Rider Drive: Surprise Future. As old Sougo Tokiwa, he was portrayed by Seiji Takaiwa, the suit actor who is known for playing the primary roles in suits except Kuuga and Hibiki.

When Sougo was young he was abducted along with several other children on a bus trip and had Sworz whisper in his ear that he would one day become king. Secretly, Sougo's rise to power was manipulated by Kamen Rider Barlckxs and the Quartzer.

On a day known as the "Day of Oma", Oma Zi-O conquered the world with seven machines called Dai Mazines, using his vast powers and time manipulation to wipe out half of humanity and subjugate the rest. A resistance soon arose to oppose him, but Oma Zi-O easily suppressed them. In the first episode, he is seen using his powers to fight them off before boasting of the fact that he was "born to be king". Unable to defeat Oma Zi-O in the future, two members of the Resistance, Tsukuyomi and Geiz, traveled to the past to change the future by changing his past self's fate of becoming Oma Zi-O.

After Sougo Tokiwa was flung into the future by Kamen Rider Decade, Oma Zi-O had Dragreder bring his past self and Tsukuyomi to him. The Demon King reveals himself as Sougo's future self, shocking the past Sougo. Deducing that his past self was in denial about becoming the Demon King, the future Sougo tells his past self that it's their destiny to become king and "save" the world. Angered, the past Sougo transforms into Kamen Rider Zi-O and attempts to attack his future self, but the future Sougo transforms into his Kamen Rider form as well and beats him down. As Oma Zi-O continues to pummel Zi-O he offers his past self a choice, telling him that if he doesn't want to become the Demon King then all he needs to do is destroy his Ziku-Driver.

Soon after Oma Zi-O launched an attack that forced Sougo out of his transformation. Oma Zi-O then opens a window in time to display his servant Kasshin beating down Kamen Rider Geiz Faiz Armor. Oma Zi-O tells his past self to return to 2018 and creates a time portal to allow the past Sougo and Tsukuyomi to travel through back to their time.

Future Sougo then reverts his transformation and takes a seat on his throne. In 2018, Sougo allowed Geiz to destroy his Ziku-Driver causing Oma Zi-O to be erased from the timeline. However, Sougo would later become Kamen Rider Zi-O again, and as a result his future was restored as well. As he's returned to existence, the future Sougo let out a laugh, revealing he knew what decision his past self would make.

After present Sougo achieved the power of GrandZi-O from obtaining the power of the past 20 Riders, he traveled to 2068 to face Oma Zi-O again. However, Zi-O found he could not match up to his future self as he still had yet to obtain one Rider power, the power of Kamen Rider Drive, which had instead been stolen from Oma Zi-O by Geiz. When Zi-O summoned Drive Oma Zi-O turned him against Sougo and used him to force Sougo out of his transformation. Though untransformed, Sougo got up and attempted to face off against his future self again. Oma Zi-O then unleashed a flurry of explosions against his past self, before Woz swept Sougo up in his scarf and sent him back to 2019. As Woz bowed before his Demon King, Oma Zi-O realized that someone had changed the flow of time, resulting in a future where Hiryu Kakogawa became Oma Zi-O. This timeline was averted when Sougo Tokiwa as Grand Zi-O defeated Hiryu as Another Zi-O II, restoring history to normal.

As Sougo is confronting Kamen Rider Barlckxs, Oma Zi-O appears to his past self to give him a speech inspiring him to not give up before delivering the Oma Zi-O Ridewatch to him.

As Swartz commenced his final plan to merge the worlds together Sougo traveled to the future just before Geiz and Tsukuyomi went back in time to confront his future self again. Sougo found Oma Zi-O repelling an attack by the Resistance and told the Resistance fighters to retreat while Sougo faced his future self. Summoning Geiz and Woz from his time, Sougo became Zi-O Trinity to fight Oma Zi-O. The fight proved fairly even, until Sougo told Oma Zi-O that he had an advantage over the future tyrant in that he had friends. Oma Zi-O then revealed that in order for Sougo to save his friends and their world, he would have to sacrifice himself. Detransforming, Sougo sent Geiz and Woz back to 2019 while he talked with his future self, commenting that it was pointless for them to fight since Oma Zi-O didn't want to kill his past self and that Sougo didn't want to fight him either.

Sougo then asked Oma Zi-O what the power of Oma Zi-O was, to which his future self stated it was the power to destroy space and time. He then further revealed that the reason Swartz engineered Oma Zi-O's rise was because he lacked the power. Sougo vowed to never become Oma Zi-O, but his future self told him to not be so sure before sending him back to his own time.

Final Battle and Conversation with his younger self

After past Sougo became Oma Zi-O and defeated Another Decade, his future self appeared before him to ask him about the choice he made not to become king, telling him that he earned the right to rule as king as he was the one who saved the world. However, past Sougo tells his future self that it wasn't he who saved the world but Geiz, Tsukuyomi and the power of the past Kamen Riders. Past Sougo goes on to further say that he doesn't want to be king in a world where he is alone, to which future Sougo remarks that he chose a noble path over military rule. Past Sougo then asks if the powers of Oma Zi-O can only destroy, and his future self answers that they do because destruction must come before creation. Conceding to his future self that he is right, Sougo then states he plans to use the powers of Oma Zi-O to rewrite history. Oma Zi-O warns his past self that if he did that, he wouldn't become king again in the future, but Sougo replies that he still believes he could. Letting out a hearty laugh, future Sougo tells his past self that it was a pleasure to see him before fading away as Sougo rewrites history.

Oma Zi-O managed to survive Sougo rewriting history, but was stuck between dimensions. He managed to escape at the cost of his power, and thus set up a game on a mysterious island to select a suitable host. He selected Narutaki to oversee the "King Game", which involved an abducted group of people partaking in various challenges, with a loser being eliminated each round via execution by Another Ryuki. However, after several rounds of the game, Narutaki began to grow bored of it as none of the people they had selected proved suitable, and thus he secretly lured Kamen Rider Decade to the island so he could stop it.

After Tsukasa discovered what was going on, Oma Zi-O intervened and teleported the surviving contestants to a barren field for them to fight in. Tsukasa transformed into Decade and fought Oma Zi-O, receiving help from Kamen Riders Kamen Rider Diend, Kuuga and Kiva-la, but the four were unable to match the tremendous might of Oma Zi-O. Oma Zi-O then used his powers to reset the timeline.

In the process of resetting the timeline, Oma Zi-O merged several parallel worlds together, resulting in six alternate Sougo Tokiwas and their high schools winding up in a barren wasteland terrorized by Elementary Inves. As a result, Oma Zi-O's body regressed back to that of a child.

While wandering the world, the child Oma Zi-O ran into Tsukuyomi, who was not aware of his true identity. After defending the child from a group of Elementary Inves, Tsukuyomi took the "True Sougo" under her protection and brought him with her as she traveled to Sougo's high school.

Upon their arrival, Oma Zi-O revealed his true nature and pulled out his Oma Driver, using it to transform into Oma Zi-O. Sougo and Tsukasa transformed into Kamen Riders Zi-O and Decade 21 Complete Form, but Oma Zi-O overwhelmed both of them, defeating and fatally wounding Tsukasa. Before passing on, Tsukasa handed Sougo the Saber Ridewatch, which he used in conjunction with the Decade Ridewatch to assume DecadeArmor Saber Form. Oma Zi-O then battled Zi-O one-on-one, but was beaten back by the Saber Ridewatch's power. He attempted to perform his finisher, but at the last second was distracted by Tsukuyomi calling out to him, allowing Zi-O to finish him off.

Through the machinations of a third Woz from an alternate timeline, Mirror Sougo Tokiwa was awakened from within Sougo and became Oma Zi-O, ruling by the year 2068 as his original self had once done.

Oma Zi-O is shown to be incredibly egotistical, something that is only backed up by his tremendous power. He believes himself to have been born into kinghood and delusionally proclaims himself to be a Demon King who saved the world, despite the fact that he reduced it to ruins and caused the deaths of over half the human population. Despite this, Oma Zi-O is very friendly when speaking to his past self and only laughs when Sougo vows to never become him. When Sougo smashes his Ziku-Driver and undoes his existence in the future, Oma Zi-O only takes it in stride, possibly because he knows the events that will come to pass.

Despite his actions, he believed that what he has done has somehow saved the world, and has become the "greatest and kindest Demon King" as his younger self would wish to become. However, he would not become so out of kindness like Sougo, but out of seeking perfection and obtaining more power.

The appearance of Tokiwa Sougo in 2019 transformed using an Oma Zi-O driver.

A belt used by Tokiwa Sougo when transforming into Kamen Rider Zi-O. By loading the Ridewatch into the slot and rotating the main body, the data of the Ridewatch is read, and various equipment and rider armor are materialized.

A watch device with built-in power of Kamen Rider. Used when transforming into Kamen Rider Zi-O or wearing rider armor.

A watch device with built-in power of Kamen Rider Oma Zi-O. Used when transforming into Kamen Rider Zi-O or wearing rider armor. It was given by 2068 Sougo Tokiwa to his 2019 self during the "Over Quartzer" incident. 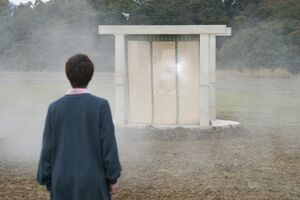 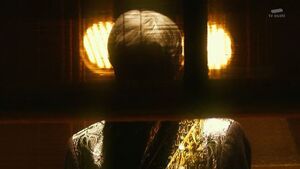 Sougo Tokiwa upon meeting his past self. 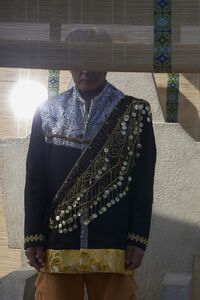 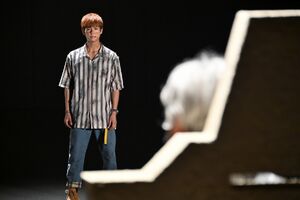 2068 Sougo interacts with his past self a final time before he resets the timeline. 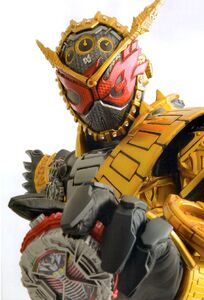 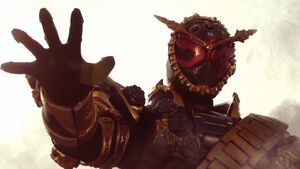 Oma Zi-O using his immense powers to destroy the Resistance. 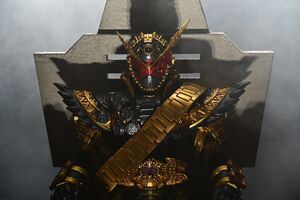 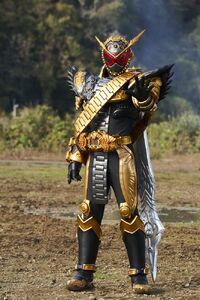 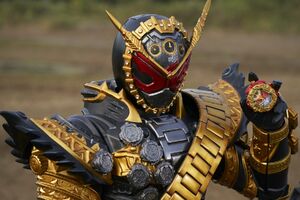 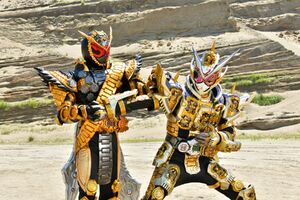 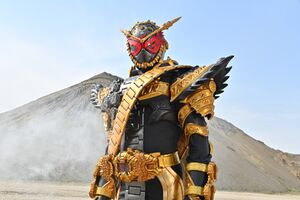