Aid Dr. Weil with his goals.

Omega is a major antagonist in the Mega Man Zero series.

A massive Reploid created during the four years of the Elf Wars, he is Dr. Weil's greatest creation and was made to be the perfect ruler, namely by storing and using the Dark Elf in order to mass-control Reploids remotely, thus preventing them from becoming Mavericks. Omega uses Zero's old body as his body, as Zero had his personality chip (which took his soul with it) removed from his body. Although seeming only to be a servant of Weil, this is proven false by Weil himself at the end of the game revealing him to be a god.

He plays a major role in Mega Man Zero 3 as the secondary antagonist and also appears as a secret boss in Mega Man ZX. Despite only appearing in one game in the series, he is a vital part of the Mega Man Zero series as a whole as what he does sets up the plot a century before the series itself begins.

Omega seems to be silently loyal to Dr. Weil's command at first, but his true personality turns out to be insane and with a God complex. Following his return after X and Zero sealed him off in space, Omega started developing a grudge against Zero. This is largely due to his defeat despite possessing Zero's body. Omega's speech seems to be reduced to minimal in his exterior armour, as he only shouts "Zero" and "Lord Weil". However, he strongly believes in his creator's purpose for him.

As he has Zero's former body, Omega resembles Zero's original self. His colour scheme seems to be darker, tinted with red, making it seem like the body was modified prior to his chronologically first on-screen appearance. It should be noted that Zero's hair doesn't fully extend until Omega's creator Weil orders him to attack. This could imply that Omega can retract his hair, and thus Zero can retract his own.

The armour that he hides his true form in resembles a knight with a long coat. It has a white colour scheme with black on its face. Red markings cover the face of his armour. The armour has floating hands that let him attack from a distance.

Before the start of the Elf Wars, the Maverick Hunters were trying to find a way to counter the Sigma Virus. Zero, upon discovering that his own body was leaking the virus, offered his body for research. The body was put under hibernation, and his memory chip was removed and put in a new body. Two renowned scientists, one of them being Dr. Weil, successfully created the Mother Elf, whose code was able to counter the virus. With this the Maverick Wars were finally over. However, Dr. Weil was unsatisfied with the result that his team had achieved with their creation, and believed the Reploids should be punished for all of the wars they waged. By analyzing the body of Zero, Dr. Weil discovered Zero's true nature, that Zero's true purpose was to be a machine of destruction. He reprograms Zero's body, turning it into Omega, who would be his messiah for his new order. He takes the Mother Elf and “curses” her by inserting the Sigma Virus on her, turning her into the Dark Elf. With the combined powers of Omega and the Dark Elf, he was able to take control over every Reploid in the world, thus starting the Elf Wars. His creation, Omega, alone wiped out most of the humans and reploids on the planet, leaving a wasteland behind. X and Zero fought Omega, and after a fierce battle, managed to defeat him with a combined attack. Omega was imprisoned on a ship and set to outer space, while X took upon himself the duty of guarding the Dark Elf. Weil was put in a mechanical body for that regenerated him for his crimes, condemned to live forever on the wasteland he created.

Centuries later, the reploid Elpizo releases the Dark Elf. Weil was waiting for this moment, so he took action immediately. Some time later, the ship with Omega landed back on Earth, so Weil went there to reclaim his seeming puppet. The X Guardians and Zero also arrive at the place.

Zero finds Omega, who is beating the three guardians with little effort. Zero fights with Omega, who doesn't seem to be sustaining at first damage. Harpuia helps him, but then Weil appears, along with Copy X, whom he reconstructed. Weil challenges Zero to get the Dark Elf before him. The elf is spotted on a residential area, so Copy X sends a rocket with Omega aboard to get it.

After the rocket crashes, Omega absorbs the Dark Elf, thus resuming Weil's plans. After Zero fights Copy X, the latter explodes, because Weil had planted a bomb on him. Weil assumes control over Neo Arcadia as ruler of the humans with Omega as the true ruler of the Reploids, replacing Copy X, and Zero goes after him, finds Omega and once again fights him.

Weil alerts Zero about Omega's true nature and his own. Omega morphs into a gigantic robot, while the place they were in starts falling down. Zero destroys this form, and when they hit the ground, he finally sees Omega's true form, discovering that Omega is his true body, and his most powerful form of all. Zero asks why the original Zero is Weil's slave, before Weil reveals that Omega is not his servant at all, but a bloodthirsty God of destruction, and all Weil did was draw his power out to its extent.

Zero fights him once again in the toughest battle yet, and takes the Dark Elf out of his body. The Elf, now freed from his curse, uses his power to paralyze Omega, but Weil taunts Zero about destroying his true body. The X Guardians arrive at the place and attack Omega, getting their own share of revenge on him. The Cyber Elf X also appears, encouraging Zero to finish the monstrous being. Zero, with a single strike, destroys Omega, but the monster's ensuing explosion takes X and the Guardians. Zero is saved by the Mother Elf, who carries him back to the resistance base. Following his death, Omega is alluded to several times in the next game.

Omega is a powerful foe who not only possesses all of the Dark Elf's powers but also a number of attacks and weapons: 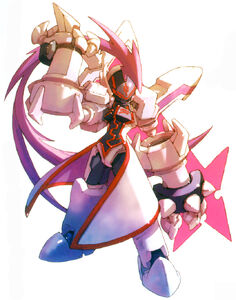 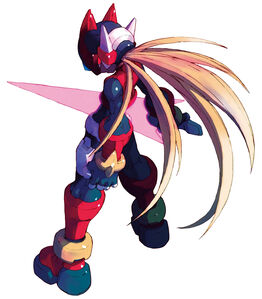 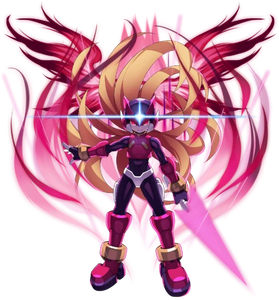