The Bringer of Doom

Leader of the Oni

Destroy each of the sixteen realms and turn them all into a dark wasteland to rule over (failed).

He was voiced by Zach LeBlanc.

The Omega is a hateful and ruthless being born from destruction who seeks to conquer and destroy all in the sixteen realms. Much of his personality is unknown, but he has a very clear hatred of humans and Garmadon. He despises Garmadon due to his sympathy for humans and refers to the citizens of Ninjago as pitiful beings. He also sees sympathy and hope as signs of weakness and doesn't understand why an Oni would join with humans. He also is very violent towards the beings who he conquers and turns them to stone. He fears the power of Creation as shown when he cowered before the Golden Armor.

Somehow the Omega became the leader of Oni. On his mission to conquer the 16 realms the Omega comes to Ninjago and attacks the city with the help of other Oni.

Very quickly Ninjago is under Omega's control and the whole city is shrouded in darkness and the inhabitants are petrified. When Lloyd and Lord Garmadon are in search of the Realm Crystal to defeat the Oni, they meet Omega, who protects the crystal. The two attack Omega immediately but he defeats them very quickly.

When they attack a second time, Lloyd manages to destroy the realm crystal, but since he and Garmadon were wrong, nothing happens. Afterwards Omega summons more Oni to defeat Garmadon and Lloyd with their help, but Lloyd and Garmadon find the armor of the Golden Master.

Since Omega and the other Oni are afraid of the Golden Armor, Lloyd and Garmadon manage to escape the Oni. They take the armor to their ship destiny's bounty, but their friends called Kai and Nya plan to transform the armor into the golden weapons of Season 1 to defeat Omega and his Oni Army.

Soon the ninja reach the monastery of spinjitzu where they restore the golden weapons. Shortly afterwards, Omega and his Oni army attack. The Oni get into a battle with the ninja and try to defeat them. Since the Ninja have the golden weapons, Omega does not find it easy to beat them. During the battle, Omega fights mostly against Garmadon. When the earth ninja Cole attacks the Oni with his earth driller, Omega throws the earth driller from the mountain on which the monastery stands. While Omega fights against him, Garmadon unleashes his oni form. Since this does not help much, the ninja hide behind the gate of the monastery. As Omega and the Oni open the gate, the Ninja and Garmadon decide to form the Tornado of Creation to defeat them. After that, everything gets bright for a short while. This has exhausted the ninja so much that they pass out. As they wake up they realize that the darkness has left Ninjago and Omega and his Oni army have disappeared. 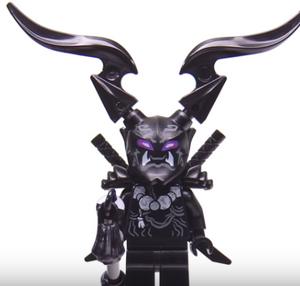 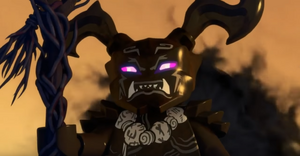 Omega conquers the Realm of Oni and Dragons 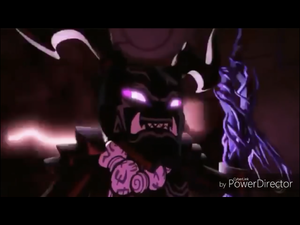 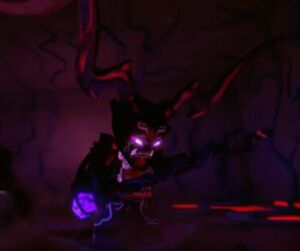 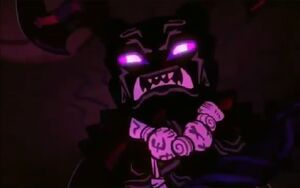 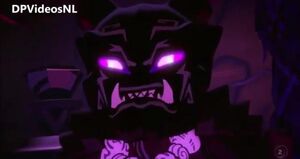 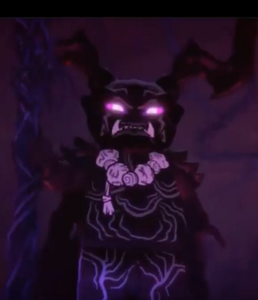 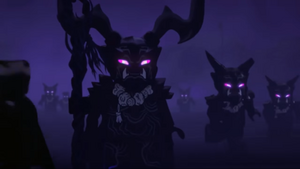 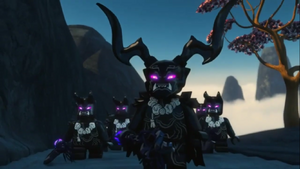 Omega arrives at the Monastery of Spinjitzu 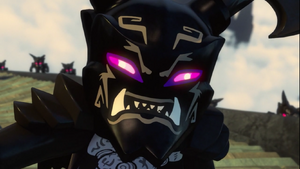 Omega in the battle of the monastery of spinjitzu 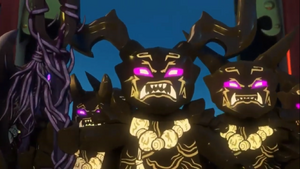 Omega opens the gate of the Monastery of Spinjitzu 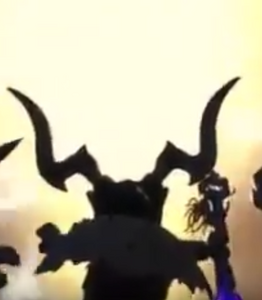 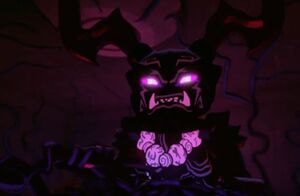