Each members has their own deadly mutant powers

Defeat X-Men and the Stepford Cuckoos.

Supervillains
The Omega Gang is a recurring antagonist faction of the X-Men comic series. 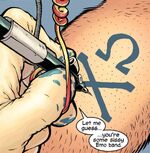 The Omega Gang is a terrorist group, founded by the rogue Kid Omega. They were once students of Charles Xavier and aspiring X-Men but betrayed their own team and opted for a violent, anti-human philosophy not dissimilar to Fascism: with the increasingly destable Kid Omega fuelling a potential race war; even allying themselves with the Brotherhood of Evil Mutants (led by Magneto) to even the odds against the X-Men.

Technicallya ll of the gang are pawns of Sublime, who was responsible for causing Kid Omega's mental instability due to being the true source of the "drug" known as Kick.

The Omega Gang (also known as the Omega Muties) were a group of mutant outcasts, led by the mutant Callisto. The Omegas' base was an underground network in the United States.

Known members included Callisto, Quill, Arclight, and Others. However, it is possible that there were many more, such as Lizard Man, Spike, Phat, and Glob Herman. The Omegas greatly disliked humans, who had made them outcasts.

After the mutant cure was created, the Omega Muties allied themselves with the Brotherhood of Mutants. Several Omegas were either killed or cured on Alcatraz Island while Callisto was killed by Storm, and the rest were killed by Dark Phoenix's disintegration wave. It is unknown if any of the Omegas has survived afterwards.