Find Wolverine, Sabretooth, and Maverick to get the Carbonadium Synthesizer

Arkady Gregorivich Rossovich, better known as Omega Red, is a villainous mutant in the Marvel universe and one of Wolverine's major enemies. He was created by John Byrne and Jim Lee.

Little is known of Arkady Gregorivich. Eventually Arkady was turned over to the KGB who set about Team X, an elite covert operations unit consisting of mutant operatives Wolverine, Sabretooth, Maverick, and Wraith. Team X stole the Carbonadium Synthesizer, a device that was used to control Omega Red’s mutant power, and as a result the KGB placed Omega Red in suspended animation.

Decades later, Omega Red allied himself with Matsu’o Tsurayaba, in exchange for the whereabouts of Wolverine and the C-Synthesizer. Omega Red was defeated by Wolverine’s teammates in the mutant super-team the X-Men. Omega Red later sought to kill the cyborg M.O.D.A.M.  Omega Red subsequently clashed with the team of mutant trainees Generation X as well as the costumed crimefighter Daredevil and the Russian super-spy the Black Widow.

Omega Red was later hired by Russian crimelord Ivan Pushkin to help incite war between the terrorist groups HYDRA and A.I.M., an effort opposed by Maverick. He was  recruited by Sabretooth alongside the cyborg Lady Deathstrike to attack the friends of their common enemy Wolverine. Ultimately Omega Red grew tired of being a lackey and became kingpin of New York’s Red Mafia.

Omega Red appears in Deadpool 2 Super Duper Cut. He appears in IceBox as a background villain. 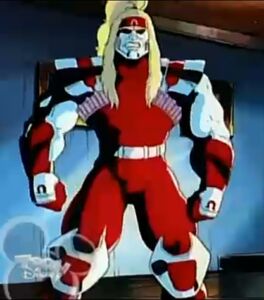 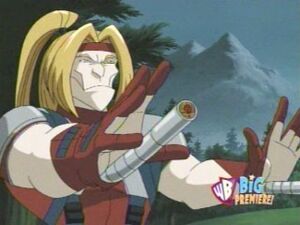 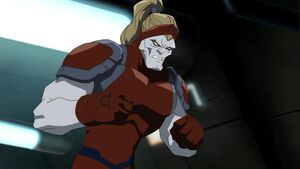 Omega Red in Hulk vs. Wolverine. 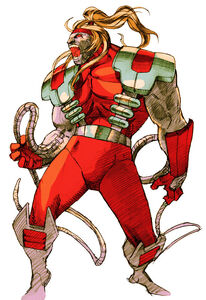 Omega Red in Marvel vs Capcom 2. 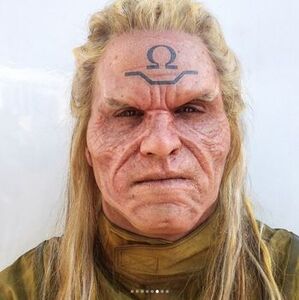 Omega Red in Deadpool 2.
Add a photo to this gallery

Retrieved from "https://villains.fandom.com/wiki/Omega_Red?oldid=4100513"
Community content is available under CC-BY-SA unless otherwise noted.