Soldier of the Soviet Union (formerly)

Committing war crimes so he can rule the world.

Kill Wolverine and Storm as payback for defeating him.
Destroy 15 of the world's largest cities (all failed).

Arkady Gregorivich Rossovich, better known as Omega Red, is the main antagonist of the episodes "Red Dawn" and "A Deal with the Devil" in X-Men: The Animated Series, and briefly appears in a flashback during the episode "Weapon X, Lies & Videotape". He is a Soviet soldier and the end result of an experiment by the Soviet Union, being one of Wolverine's archenemies alongside Sabretooth. Despite only appearing in a handful of episodes, Omega Red is by far one of the most depraved villains in the entire show for representing how maniacal the U.S.S.R. was in real life.

He was voiced by Len Doncheff.

Omega Red was made into a living weapon by generals of the Soviet Union, using the Super Soldier Serum that made Captain America. During the Cold War, he fought Team X up until he was frozen in cryogenic suspension. However, following the collapse of the Soviet Union, some radical Generals (including those who sealed him away in the first place) planned to free him in order to retake their "sovereign nations" and reform the union. Omega Red successfully retook the Republic's capital via blitzkriegs, putting any and all survivors in gulags. When he and Darkstar were sent to exile the members of the Russian Parliament, he attempted to kill them instead, wanting to rule the Soviet Union himself.

Omega Red proved more than a match for the combined forces of Colossus and the X-Men, including his old enemy Wolverine. At one point, he even threatened to kill Illyana Rasputin by draining her lifeforce with a sadistic smile on his face, showing that he's even above child murder. Darkstar had turned against Red after seeing what he did to the Russian people, shortly after which he was defeated by the combined efforts of Colossus and Storm, the latter of whom summoned snow to freeze him. He was then recaptured and put back in suspended animation.

He was later rereleased by the U.S. military, who gave him a mission to infiltrate a nuclear submarine sunken into the Pacific Ocean and to bring it back; Omega Red agreed to their terms so as long as Storm and Wolverine could go with him. The three found the sub and boarded it. However, Red (who had a freeze-switch implanted into his head but managed to rip it out) tried to use the sub's arsenal of warhead missiles to destroy 15 of the world's largest cities while also getting his revenge on the two X-Men for freezing him twice.

Fortunately, his plan was stopped by Beast and Rogue using depth charges from the Blackbird, and then he sank along with the sub after trying to destroy Hawaii in a fit of anger, likely stuck at the bottom of the sea for the rest of eternity. 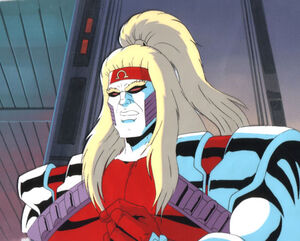