To bring about the Strip’s downfall. 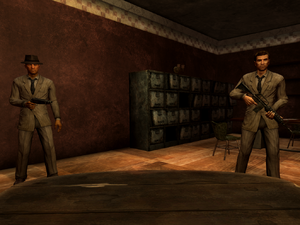 The Omertas are one of the three ruling families of the New Vegas Strip under Mr. House, along with Benny's Chairmen and the White Glove Society. They evolved from a raider tribe known as the Slither Kin who had only one standard: never betray each other. Everything else: murder, rape, enslavement, etc., was permitted. House took them in and taught them to be more sophisticated organized criminals so that they could recreate the seedier elements of Las Vegas from before the war.

In 2281, the Omertas run a casino known as the Gomorrah, which is easily the most flagrantly seedy and perverted one on the Strip. However, all this is tame compared to the true intentions of the Omertas, who are actually in cahoots with Caesar's Legion and plan to kill the other residents of New Vegas with chlorine gas bombs when the Legion attacks the NCR at Hoover Dam, so that they can later be the sole family in controlling the Strip under the Legion. This plan is known as "Operation: Racket".

The main leaders of the Omertas are Big Sal and Nero, who are both in on this plan. The highest ranking member who does not know of the conspiracy is Cachino, and even then Cachino is a thug, rapist and thoroughly unpleasant person. However, he turns on his superiors when he learns of their horrible plans and helps the player take them down in the quest "How Little We Know". Of course, there is also an evil alternative where the player is given the opportunity to side with Big Sal and Nero.

There are two other notable associates of the Omertas: Clanden, who seems to be a relatively normal and decent person on the surface but is in reality a sadistic snuff filmer who tortures and murders prostitutes who have found out about the Omertà conspiracy, and Troike, who was tricked into thinking he murdered a prostitute he was sleeping with in a drug–induced rage and forced into gathering weapons for the Omertas for when they attack the Strip. Like Cachino, he can be reformed and convinced to help the player destroy the Omertas' weapons.

Retrieved from "https://villains.fandom.com/wiki/Omertas?oldid=3479115"
Community content is available under CC-BY-SA unless otherwise noted.