Ruling the world by dark magic.

Ommadon is the main antagonist of Rankin/Bass Productions' 1982 animated fantasy film The Flight of Dragons, which is loosely based on the 1976 fantasy novel The Dragon and the George by the late Gordon R. Dickson. He is an evil red wizard who is aided by his dragon named Bryagh.

He was voiced by James Earl Jones, who also played Darth Vader in Star Wars: A New Hope, Thulsa Doom in Conan the Barbarian, Lavan in My Little Pony'n Friends, The Emperor of the Night in Pinocchio and the Emperor of the Night, and the Levram Wizard in the 2003 Teenage Mutant Ninja Turtles TV series.

Ommadon is a wicked red wizard whose brother, Carolinus, then proceeds to explain to the other three of the magic brothers that the world of magic is dying. To save it, they must join together to create the "Last Realm of Magic", a protected place where the magic will live on after humans stop believing in it. Ommadon refuses to aid his brothers and vows to dominate humanity by infesting humans with greed, in an attempt to stop magic's death by force.

This rather brutal and sadistic solution outraged the other wizards, but the only way to stop him is to take his Red Crown, the source of his dark magic. In the 20th century, Peter Dickenson, a poor, dreaming scientist, and inventor, is also a descendant of an ancient hero, and is asked to begin a quest for this purpose and is transported into the failing world of magic.

He meets the three wizards, the two dragons, and the beautiful Princess Melisande, who is a Wizard's foster daughter. Despite his joyful surprise by the fantasy world (particularly the Dragons), Peter has doubts about being a hero and his mission, so Melisande has to talk with Peter and tries to comfort him. Unfortunately, Ommadon witnesses their conversation and sends Bryagh to kidnap Peter, but a magical mishap (in an attempt to save him) leaves Peter in the body of the house-dragon named Gorbash. Knowing nothing about being a dragon or about magic, Peter travels with two other companions, the knight named Sir Orrin Neville-Smythe, and the dragon named Smrgol.

During the journey, it is Smrgol who teaches Peter the details of being a dragon, something that accuses his scientific curiosity about the dragons' physiology, much to Smrgol chagrin due to the latter's insistence in rationalizing his teachings (even though his theories have a basis in logic and accuracy deduction). At their campsite, Ommadon sends his traitorous race of rodent-like creatures called the Sandmirks to attack the party with their insanity-inducing cries.

The blue wizard named Solarius offers the dead wolf, Aragh, his life back in return for the death of the Sandmirk queen. He agrees to join the quest. Princess Melisande is put into a deep sleep by the cries while using her magical abilities to see the party. The group presses on, and they are attacked by Giles of the Treetops and his elves because they are mistakenly suspicious and questionable of the dragons. The archer Danielle of the Woodlands saves the group because she recognizes Sir Orrin. Learning the truth, Giles and Danielle join the travelers.

The survivors move on to Ommadon's Red Realm and defeat the gigantic Worm of Sligoff. They use magic gifts, a shield, and a flute, to defeat Ommadon's spell of despair and to put a flight of dragons to sleep (including Peter occupying the body of Gorbash). The magic flute does not defeat Ommadon's dragon Bryagh, who kills Danielle, Aragh, and Giles. Sir Orrin slays Bryagh with his sword while being burned alive by dragon fire. Ommadon magically appears claiming victory.

Peter reappears to confront Ommadon when he realizes that two things cannot exist in the same place at the same time. Ommadon then transforms into a monstrous body with six dragon heads to attack Peter. Peter then uses his scientific knowledge to deny all magic; in a dramatic conclusion, Peter alphabetically lists as many branches of science as possible, and Ommadon, whose teachings and power are based on superstition and the ignorance of others, tries to match Peter's list with his own list of foul creatures (harpies, witches, trolls, demons, and many more creatures) but cannot withstand Peter's onslaught of science, and literally dies of disbelief, disintegrating into dust.

The death of Ommadon allows the party to return to life. Carolinus arrives (along with the remaining two magic brothers) and succeeds in creating the "Last Realm of Magic", but sadly concludes that Peter is gone from the magic's reach. Princess Melisande wakens from her slumber and informs them Peter appeared and woke her with a kiss. Carolinus concludes that Peter's actions suggest he may still believe in some magic after all. She asks to join him in 20th century Boston, and Carolinus reluctantly agrees.

Ommadon is a sly, ungenerous, and oppressive tyrant. He is a prideful and blasphemous sorcerer who stops at nothing to crucify Peter and his friends. He is also shown to be truly devious, relentless, and manipulative, even to his dragon by waking him up with a whip.

Ommadon is perhaps the most powerful and persuasive of the brother wizards throughout the film. His crown (the source of his power) is fed by human sin and fear, leaving him with power, despite the change from magic to logic. He doesn't seem to require spells like Carolinus for his magic to work and has been seen using his magic to manipulate minds and transfigure his own body.

Although powerful with dark magic, Ommadon’s weakness is someone’s denial of magic, and if someone uses scientific knowledge against him, he will be destroyed from existence. 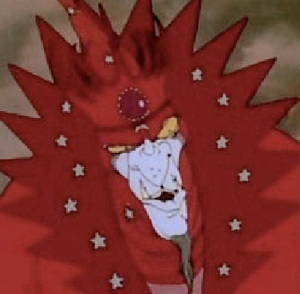 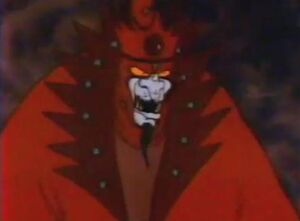 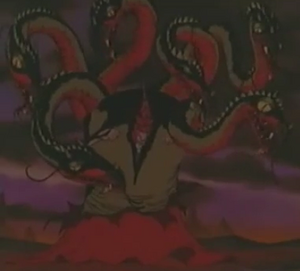 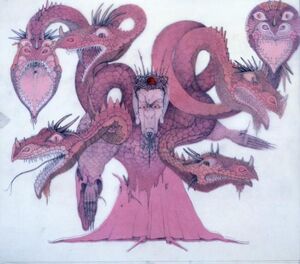 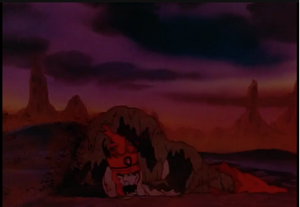 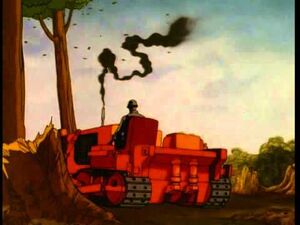 James Earl Jones is Obadon the Red in Flight of Dragons. 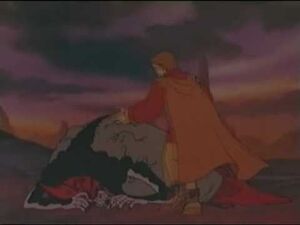