Having his followers commit sacrifices in his name.

Rule the world by using technology to cause natural disasters and global incidents.

The Omnipotent God, also referred to as the Black Sun God, is the true leader of Machine Empire Black Magma and the ultimate antagonist of Taiyo Sentai Sun Vulcan. He communicated with Führer Hell Saturn through an idol for most of the series though was later revealed to be just a very powerful living brain.

However, Hell Saturn was later killed in a duel with Inazuma Ginga, allowing Queen Hedrian to take control of Black Magma. To reassert his influence, the Omnipotent God revived Hell Saturn as a phantom and placed a curse on Queen Hedrian's mechanical heart to cause it to rust. In order to appease the Omnipotent God, Hedrian kidnapped the daughter of Guardians of World Peace leader Daizaburou Arashiyama, Misa Arashiyama, so she could sacrifice her to the god. Before she could go through with the sacrifice, however, her heart shut down due to the rust and she died.

Commander Arashiyama and Sun Vulcan then made their way to the chamber where the Omnipotent God resided, alongside the resurrected spirits of Black Magma's past three leaders, Fuhrer Hell Saturn, Queen Hedrian and Amazon Killer, as well as a robotic clone of Misa. The Omnipotent God tells Arashiyama and Sun Vulcan to bow down or else they kill Misa. However, hearing the robotic Misa tell him to surrender causes Arashiyama to realize its a fake. In a sneak attack, Arashiyama uses VulEagle's Vulcan Stick to destroy the Omnipotent God's jar, killing the Black Sun God and causing the spirits of Hell Saturn, Queen Hedrian and Amazon Killer to disappear. 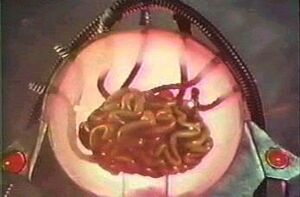 Retrieved from "https://villains.fandom.com/wiki/Omnipotent_God?oldid=3645770"
Community content is available under CC-BY-SA unless otherwise noted.