The general of the Space Nut Boogies

Take over Foster's home, defeat Bloo and his friends (formerly).

Omnizot is a Space Nut Boogie created by Goo, Omnizot is known as the purple gorilla-octopus, of which is quite odd, yet very fitting. Although Wilt as Baron Von McNasty claims to be the leader of the Space Nut Boogies.

Make Believe It Or Not.

Goo subliminally creating an unseen character to the game known as "Omnizot," her biggest fan and Co-Leader of the Space Nut Boogies. After resuming their arguing, Mac ultimately wins by creating a freeze-ray that freezes time and space. Shortly afterwards, the power returns and everyone resumes their electronic activities as Goo wanders home babbling incoherently about her lost argument with Mac until she returns home and goes to sleep.

Omnizot and the Space-Nut Boogies are playing by the rules of the game. However. Now understanding that only Mac and Bloo can stop the Space-Nut Boogies as their game counterparts (Rex and Bloonan) are meant to, Goo and Coco enter the basement and knock them and Omnizot out cold with one of Coco's eggs as an "exploding sleeping gas bomb". They then discover that Mac and Bloo's torture was actually being subjected to tickle torture from the machine known as the "Deranged Insanolizer," much to Goo's disatisfaction (While they were pretending during the game, Wilt tickled Mac and Bloo pretending to be said machine).

he and his army attack and take over Foster's home, spreading his army around the home. In a minigame, Bloo tries and defeats him by attacking his tentacles and gets defeated by Bloo and redeems himself near the end and eats Ed's pie in the end.

He, like the rest of his group, wears a jetpack, lava pants, and Space-Time undies. He also wears suspenders, a star-like plume on his head, wrist collars, and a star on his belt.

He loves Ed's pies. He was only seen in "Make Believe It or Not".

He dislikes anyone who he isn't in control of.

It is unknown what has happened of him and the other Space Nut Boogies. 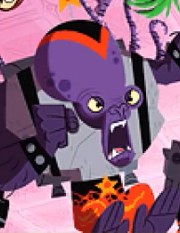 Omnizot as he appears in the DS game.
Add a photo to this gallery

Retrieved from "https://villains.fandom.com/wiki/Omnizot?oldid=3363111"
Community content is available under CC-BY-SA unless otherwise noted.