The One-Armed Man is the main antagonist in the 1963-1967 television series, The Fugitive as well as the secondary antagonist in the 1993 film of the same name involving Richard Kimble, who was falsely accused of murdering his wife Helen. Both are based on the real life story of Dr. Sam Sheppard.

He was portrayed by the late Bill Raisch in the TV series, and the late Andreas Katsulas in the film.

Despite being the main antagonist, the one-armed man was rarely seen in the series, having almost no dialog until season 4 where he begins to have a larger role in the story.

He is aware that Kimble is on the run and targeting him and actively attempts to stop him, primarily by tipping off the police to Kimble's whereabouts. He too is on the run and adopts a variety of different aliases and occupations, even working as a bookmaker for the mob.

Throughout the series, a number of details are slowly revealed about the mysterious killer such as his age and blood type until his name is unofficially revealed as "Gus Evans" in one episode, and in another "Fred Johnson". The latter appearance has Kimble save the man's life when he becomes critically injured following a news story about a car theft; however the reporter that wrote the article fakes his signature on a written confession after his heart briefly stops, and Kimble is unable to get a written confession before calling an ambulance for "Fred" and being forced to flee the police once again. Gerard sends a police lieutenant to interview the hospitalised man, only for him to knock down the male nurse and make his escape shortly before the lieutenant's arrival, once again frustrating Kimble's chances of acquittal.

However, his real name was never officially confirmed or denied, making the villain all the more mysterious. The final episode reveals that the one-armed man killed Kimble's Wife and that there was an eyewitness: city planning commissioner and neighbor Lloyd Chandler, who didn't want to reveal his cowardly behavior as he feared losing his reputation as a WWII hero. After discovering the one-armed man was arrested in Los Angeles, Lloyd posted bail by using the name Leonard Taft, Kimble's Brother-In-Law. When Lloyd hears from Kimble's sister Donna that the one armed man called wanting to meet Len, she thinks it is someone making a crank call and agrees to it in order to teach him a lesson.

Lloyd however makes the meeting, where the one-armed man knocks him out and empties his gun. When Lloyd gets up, the one-armed man demands $50,000. After the two leave, Kimble And Lt. Philip Gerard arrive and find a bullet from Lloyd's Gun. Lloyd tries to get the money but is unable to and tells his wife Betsy about the night that Helen was killed. At The Taft House, Donna finds one of Lloyd's Bullets In her son Billy's dresser drawer. When shown, Gerard Identifies it as the same one that he and Kimble had found. Donna and Leonard tell Gerard that Billy got it from Lloyd, who was teaching him how to fire a gun. With the truth now out, Kimble and Gerard head over to the Chandler residence to learn that Lloyd has headed to an abandoned amusement park and is luring the one-armed man in a confrontation so he can make up for his earlier unwillingness to talk by assassinating the one-armed man.

By the time Kimble and Gerard arrive at the amusement park, Lloyd and the one-armed man have started a firefight, with the one-armed man's pistol squaring off against Lloyd's rifle. While trying to stop the shooting, Gerard takes a bullet to his thigh from the one-armed man, temporarily disabling him. The lieutenant tosses Kimble his weapon and Kimble heads off to finally confront his wife's murderer. Lloyd is forced to help Gerard walk, and during the whole time Gerard tries to convince him to speak up so Kimble can be exonerated.

The climax takes place on top of a tower where Kimble has chased the one-armed man and where they engage in hand-to-hand melee while Gerard and Lloyd watch from the ground. Kimble is able to extract a confession from the one-armed man, who had become tired of having Kimble pursuing him. The one-armed man then manages to get hold of Gerard's pistol, tells the doctor he is going to kill him, and attempts to fire it, but before he is able to, Gerard hits the one-armed man with a well placed shot from the ground with Lloyd's rifle. The one-armed man falls off the top of the tower to his death. Kimble climbs down and tells Gerard that he was able to get a confession out of the one-armed man, but since he is now dead and there are no other witnesses but himself, he can't prove his innocence. Lloyd, apparently having been convinced by Gerard, decides that he will, in fact, testify on Kimble's behalf in order to exonerate him. In the final scene of the episode and the entire series, Richard is successfully exonerated.

In the film version, he is a former Chicago Police officer turned security guard named Fredrick Sykes who has a prosthetic arm. He works for pharmaceutical company, Devlin Mcgregor. He is sent by the main antagonist to murder Kimble after Kimble discovers that the company's new drug, Provasic, was causing severe liver damage. He instead murders Kimble's wife. While on the run, Kimble eventually discovers his true identity as well as leading U.S Marshal Samuel Gerard to him, who becomes very suspicious of Sykes and begins investigating him.

Later, Sykes corners Kimble on an El Train. At that moment, Kimble is simultaneously spotted by a civilian and a transit cop. Sykes kills the cop and tries to kill Kimble, but fails when Kimble is able to overpower him due to him only having one arm. He is then arrested, along with his employer, while Kimble is driven off and exonerated. 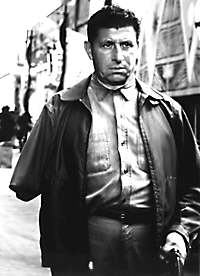 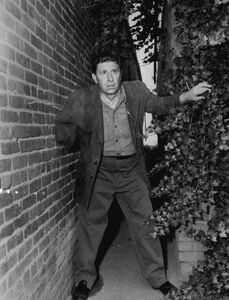 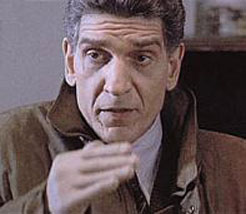 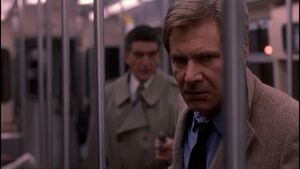 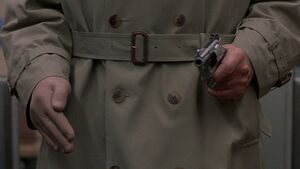 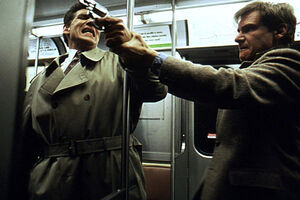 The One-Armed Man and Kimble fight in train. 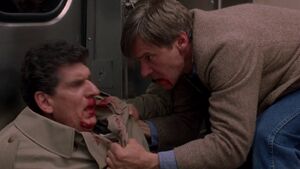