One-Eye is the main antagonist of Monkey Mountain, a story in The Lion King magazine series "Hakuna Matata".

One-Eye is a leopard who lives in the African jungle. He has a scar over his left eye after having been attacked by a warthog, which resulted in him having bad eye vision and having to rely on his three minions; a hyena named Shriek and an unnamed African wild dog and vulture for help in hunting. One day, One-Eye along with Shriek and the wild dog, is informed by the vulture minion about the arrival of Timon, Pumbaa and Simba. One-Eye warns his minions to be wary of Pumbaa and sees Simba as a potential meal. He sends his three minions to trap the trio.

One-Eye and his minions eventually catch up with the trio at Monkey Mountain. However, Simba is able to make the minions leave by scaring them away with his roar whilst Pumbaa lurges at One-Eye and sends him rolling down the cliffside, where he gets up and stumbles away defeated. 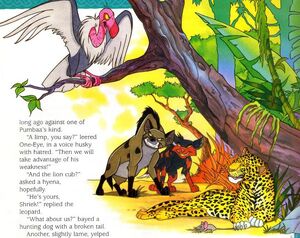 One-Eye, Shriek and the wild dog and vulture 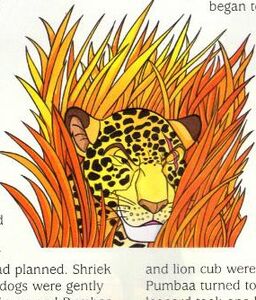 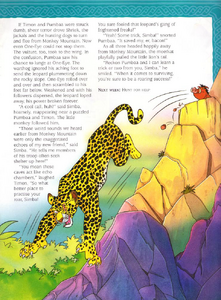