The One Below All

Demonic Counterpart of the One Above All

Aspect avatar physiology
Meta disaster manipulation
Omnipotence and omniscience, limited only by inability to exist outside its native reality without a gamma-radiated host

Possessing, manipulating, and ultimately destroying everything it comes across.

Break free from its realm.

Destroy all of everything in the multiverse.

The One Below All is the overarching antagonist of Marvel Comics, serving as the main antagonist of the Immortal Hulk series. It is the opposite of creation and the dark reflection of existence.

The One Below All is the direct and opposite counterpart of the One Above All. This has radically altered Marvel's cosmology since this makes the One Below All Marvel's first true "Anti-God", and as such, it is the unequaled embodiment of destruction, wrath, and ruin.

The One Below All is also the true power behind the mutagenic factor of gamma radiation in Marvel, creating the gamma-mutates (of which Hulk is obviously the most famous and powerful). It was this very revelation that drove Brian Banner insane as he believed his son carried a "monster gene", having caught a glimpse of the One Below All during his own experiments into gamma radiation.

So far, the One Below All has no set "true form", but has very brief appearances where it can take seemingly any form it desires, though it favors the use of extremely abstract and terrifying visages.

There's no doubt it could further play on its dreaded reputation as the possible "true" Satan of the Marvel multiverse.

Despite its Satanic nature, the One Below All's apparent "true form" is actually a gigantic mass of green smoke and resembles a living gamma-bomb explosion in many ways, which is very likely symbolism of the One Below All's nature as both an embodiment of destruction and the hidden, malevolent intellect behind the mutagenic nature of gamma radiation in Marvel.

It is also revealed that despite the entity's immense power, it can only manifest via the Green Door or gamma-mutated beings such as the Hulk. Indeed, it was the Hulk who was necessary to unleash the One Below All from its dark domain in the first place. 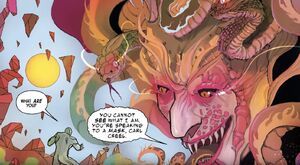 The One Below All. 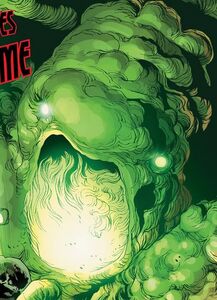 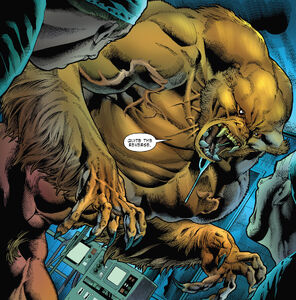 The One Below All possessing Sasquatch. 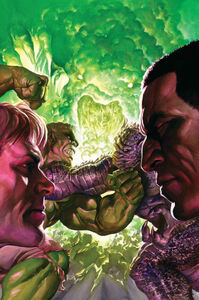 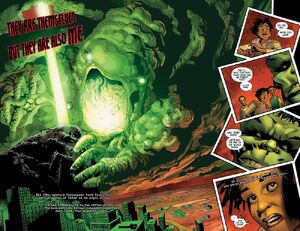 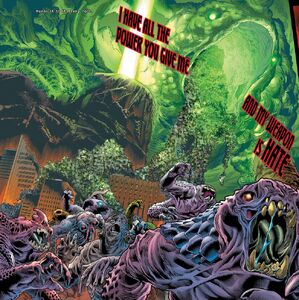 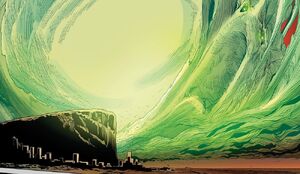 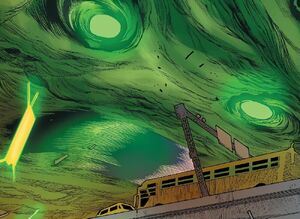 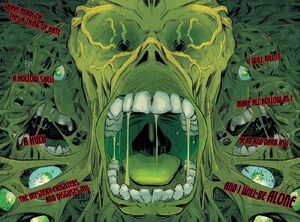 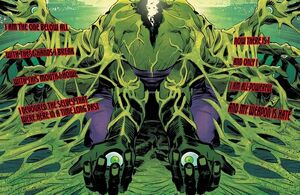 Hulk defeats the One Below All.