Leafie, A Hen into the Wild

To hunt and eat Leafie, Greenie, and the ducks (failed).

One Eye (also known as the One-Eyed Weasel) is the main antagonist in the 2011 South Korean animated film Leafie, A Hen into the Wild. She is a manipulative weasel who persists in hunting Leafie and the ducks for food.

She was voiced by Kim Sang-hyeon in the Korean version, and Stacey DePass in the English dubbed version.

When she was hunting, One Eye got into a fight with Wanderer, a guard duck from a flock of ducks that was resting in the Everglades. The battle resulted with One Eye crippling Wanderer's wing, but cost her right eye when Wanderer clawed it in return, forcing One Eye to make a painful retreat. This was the start of a life-long battle between the two animals.

Sometime later, the weasel stalked the farmer who was disposing a pile of dead hens from his chicken farm into a pit within the forest, also dumping an unconscious Leafie along with them. Seeing that Leafie was the only hen alive, One Eye immediately attacked the hen to eat her, but Wanderer arrived and saved Leafie by trapping One Eye under the farmer's wheelbarrow. One Eye later escaped and lurked into the brier patch Leafie, Wanderer and his mate took residence in, discovering Wanderer's mate and killing her. When Wanderer tried to pursue One Eye to save his mate (whose limp body was held in the weasel's jaws), One Eye only gave the guard duck a smile and proceeded to take his mate's body away to eat it.

A night later, One Eye attempted to enter the brier patch again to hunt for more prey, only to be driven away by Wanderer. Though she was impressed that the guard duck managed to beat her with just one wing, the weasel warned him that next time she would go for Wanderer's neck, and she retreated back into the darkness of the night. To protect Leafie and his unborn child, Wanderer engaged One Eye in a fight to the death the following moonrise, leading the weasel away from the brier patch towards the edge of a cliff. This time, however, One Eye gained the upper hand during the struggle and cornered the injured Wanderer at the top of the cliff. When the weasel grabbed hold of Wanderer's leg (after he attempted to strike her while jumping over the cliff's edge), the guard duck attempted to take One Eye down with him by allowing himself to fall to the ground from a great height. The impact killed Wanderer, but One Eye survived. Seeing that her rival was dead, the weasel took Wanderer's body away to eat it, but not before seeing Leafie mourning Wanderer's death nearby. One Eye went back to Wanderer's nest the following night only to find it empty, but discovered traces of Wanderer's child having hatched, and the weasel left the nest with a wicked smile on her face.

A few months later, One Eye attacked Leafie and a teenage Greenie after their scuffle at the chicken farm. When Leafie accused the weasel for always picking on them, and for killing Wanderer and his mate, One Eye defended her actions that she was only hunting for food. One Eye then revealed that both Leafie and Greenie had caught her interest, seeing them as potential prey like Wanderer and his mate. She targeted Greenie to eat first, possibly knowing that he was Wanderer's offspring, and chased him down through the surrounding area. Despite Leafie's intervention, One Eye managed to corner Greenie at the edge of a cliff. When the weasel finally pinned down the young duck on top of an old tree, the tree broke apart over the cliff's edge, sending One Eye and Greenie plummeting. While One Eye managed to grab hold of a footing on the cliff face to save herself, Greenie successfully learned how to fly and escaped certain death.

In the winter season, One Eye gave birth to a litter of baby weasels and hunted to provide food for her and her new family. She, at one point, captured a female duck from Greenie's new flock and was making her way back to her den to eat the fowl, but stopped halfway when she noticed Leafie's footprints leading back to her den. Greenie spotted One Eye and tackled her off the female duck, causing both of them to slide down to the front of the den.

One Eye recovered from the strike shortly afterward and pinned down Greenie, but stopped the attack when she discovered Leafie was standing over her newborn pups in the den (the hen was keeping the pups warm and was unaware of them being One Eye's offspring). The weasel threatened Leafie to not come near as she was about to kill Greenie, but stopped when Leafie nearly stepped on her babies, frantically telling the hen to get away from them. Upon discovering that the baby weasels were One Eye's offspring, Leafie threatened to harm the babies if One Eye doesn't release Greenie. The weasel was forced to let Greenie go when Leafie didn't bring harm to the babies, and One Eye immediately comforted her offspring and nourished them what little food she could provide them for the time being, allowing Leafie and Greenie to escape.

When the flock of ducks left the everglade, along with their new guard duck, Greenie, One Eye confronted a lone Leafie at the top of the cliff, intending to eat the hen for the sake of her pups' survival. Knowing that One Eye now kills to provide food for her pups, Leafie allowed herself to be killed and eaten by One Eye so her babies wouldn't starve, resulting in the weasel mourning for Leafie's selfless sacrifice. In the original version, the weasel was last seen dragging Leafie's lifeless body away, presumably back to her den to devour it. In the censored version of the film, One Eye lunging at Leafie is not shown, and she is not seen dragging away the body.

One Eye is a vicious, dangerous, bloodthirsty and aggressive predator feared by those who live in Everglades and brier patch, hunting animals that catches her eye and only eating live prey. While her actions to appear malevolent and malicious, like all animal predators, she is driven by her need to hunt and kill for food to survive. She is shown to be persistent in her hunt for her target prey, as demonstrated in her pursuit of Greenie to eat him.

After she gave birth to a litter of baby weasels, One Eye became extremely caring and protective of them and desperately wanted to provide food for her and her young to survive the winter. When Leafie discovered that the baby weasels were One Eye's offspring, she realized that the weasel wasn't actually evil and was only trying to provide food for her newborn babies. Sometime after this realization, Leafie willingly allowed herself to be eaten by One Eye, so her babies wouldn't starve. The hen's selfless sacrifice surprised and heavily moved One Eye, and the weasel shed tears in mourning as she delivered the killing bite to Leafie. It is highly speculated that both Leafie and One Eye finally understood one another, both as living creatures and as mothers.

One Eye's only known trait is her agility, which she uses in her hunt for prey. This trait was matched by Wanderer's speed when they first fought, ending their first battle with a draw. She is also durable, having survived a dangerous fall while clinging onto Wanderer, and at one point, quickly recovered from a collision with Leafie. Her claws are used as a weapon for the attack, either to deliver a deadly blow or to swipe her prey aside. One Eye also uses her sharp teeth to strike at her prey directly (as seen in a flashback depicting her first battle with Wanderer) and hold a firm grip on their neck to ensure they don't squirm free.

Despite having lost an eye in her battle with Wanderer, One Eye learned how to manage very well without it. 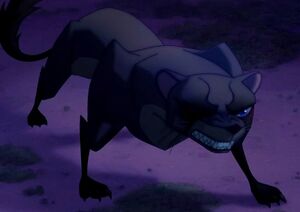 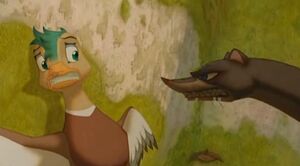 One Eye about to kill Greenie. 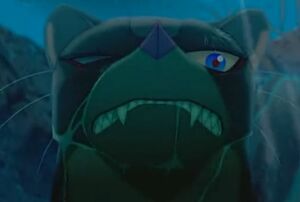 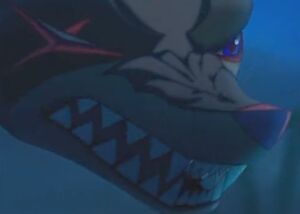 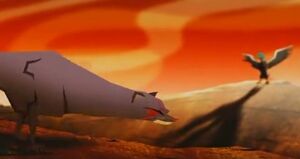 One Eye losing her right eye after her first encounter with Wanderer. 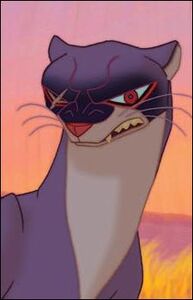 One Eye as seen in her promotional picture for the film. 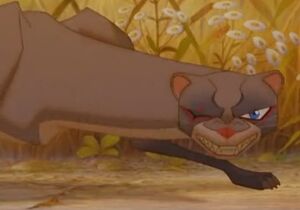 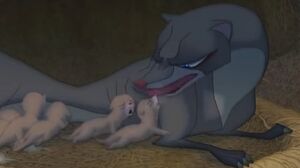 One Eye tending to her newborn babies. 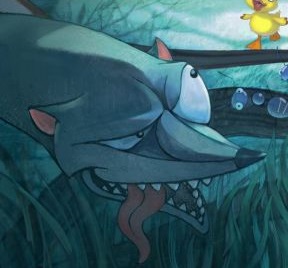 One Eye's original design in the early stages of Leafie: A Hen into the Wild 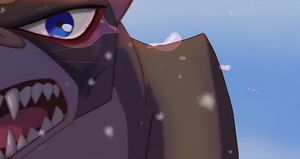 One eye shedding tears as she is about to kill Leafie. 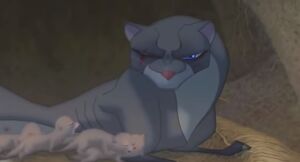 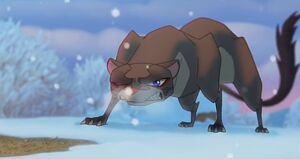 One Eye weakened and starved stutters Leafie to the top of a hill. 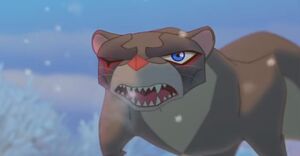 One Eye after Leafie told him she could eat her.
Add a photo to this gallery

Retrieved from "https://villains.fandom.com/wiki/One_Eye_(Leafie,_A_Hen_into_the_Wild)?oldid=3367591"
Community content is available under CC-BY-SA unless otherwise noted.