Kidnapping people
Eating the remains of dead people
Torturing anyone who ventures into the West Virginia forests.

Kill as many people who visits the forests of West Virginia and eat their remains (mostly succeeeded).

One Eye is one of the main antagonists in the Wrong Turn film franchise and a member of the Odet Family. He is the younger brother of Saw Tooth and Older brother of Three Finger.

In 1974, One Eye and his two brothers are found eating a couple only known as the Hilikers (no relation to Sally and Jackson Hilliker) and are assumed to be their children. The Odet brothers are brought into the Glenville Sanatorium in West Virginia where they escape and cause a riot with the other mental patients. For the next 29 years, they survive their isolation by eating all 179 other fellow insane inhabitants.

In 2003, nine college students try and head to their friend Porter's cabin for the winter, but get lost in a snowstorm and decide to stay the night in the now abandoned asylum, not knowing Porter is dead and unaware of the current maniacs that still live there.

One Eye and his brothers eventually reveal themselves to the group of friends when they when they find Porter's severed head in his shirt and then hang Claire with a barbed wire noose in front of them until she's decapitated. They try and escape the asylum, but remember the snow storm would make it nearly impossible. Lauren however volunteers to make an attempt to get help anyway with her skis since she's the best at using them, but fails and freezes to death off-screen.

Daniel soon enough gets kidnapped by the Odet brothers and he's taken to their kitchen, where they cook and eat him alive in an attempt to draw his friends to them, but they fail to save him. The group however does manage to scare the trio into a cage and lock them inside. When Kyle is just about to light the cannibals on fire, Kenia begs him not to since "they're better than they are", to which Kyle reluctantly agrees and stays to guard them while the others think of a plan upstairs.

Kyle falls asleep however and the brothers escape, put a bag over his head, cut off his tongue, and send him after the remaining women of the group who stab him to death thinking he's one of them until they remove his "mask". One Eye and his brothers then chase the girls out a window outside, but not before Jenna gets impaled with a ground driller by Saw Tooth. Kenia, Laura, and Bridget try and escape with the snowmobiles, but the brothers have stolen them. In the storm, Bridget gets separated from the others and One Eye gores her underneath the tracks of his stolen snowmobile.

In the morning, after Kenia and Laura knock One Eye off his snow mobile and take it back, they drive off believing they survived until Kenia accidentally drives into a barbed wire fence and the both of them are decapitated. Three Finger packs their bodies into his truck and drives back to the Asylum.

At some unknown point in time, Maynard Odet heard about the Odet brother's actions and decided to go and finally meet them, as well as take them with him on his travels around West Virginia.

After Maynard is arrested and taken to a holding cell for assault with a deadly weapon after causing a group of friends to crash their car, One Eye and his brothers arrive and kill Deputy Biggs when Three Finger shoots him in both his legs with arrows and then stabs him in the top of his head while Saw Tooth and One Eye hold him still.

While Maynard waits patiently in his jail cell, Three Finger uses his truck to pull down a telephone pole to cut out all the service. One Eye and his brothers then cut out the power to the entire town when they capture a security guard working at the power plant and electrocute him to death on the power lines.

Later, Three Finger, Saw Tooth, and One Eye kidnap Gus, break his legs with sledgehammers, and then leave him on the street to scream for help to bait out the others. When Sheriff Angela tries saving him, Three Finger runs him over and kills him.

When Julian and Billy go out to search for Cruz, not knowing she's already dead, and get captured by the Odet brothers. When Sheriff Angela sends a man named Mose to try and find Julian and Billy, he gets captured and is put inside a makeshift brazen bull to burn to death.

Three Finger then sets a trap for Sheriff Angela by kidnapping her husband, Deputy Jason, and putting him in his truck to look abandoned with tape over his mouth. When Sheriff Angela opens the door, a sickle disembowels him. Three Finger then reveals himself to Sheriff Angela and the two start fighting. When she shoots him in the leg, he's only annoyed thanks to his Congenital Analgesia and he kicks her in the face to knock her out.

As Maynard and his grandchildren finally leave town, they pick up a blinded Lita, and kidnap her to rape, torture, and eventually kill her.

When Three Finger spots a couple, Daria and Nick, having sex in a watering hole, he spies on them until they get on their bikes and ride off. When Three Finger shoots Nick in the back of the head with an arrow, Daria continues riding away in fear until she clotheslines herself by the eyes on a line of barbed wire. Saw Tooth and One Eye then appear by her sides and hold her arms still while Three Finger cuts her head off.

Later on, at the Hobb Springs Resort, One of the Odet brothers throws an axe at an elderly woman staying at the resort and pins her to the wall. Jackson Hilliker tells the brothers to remain calm and not go around killing guests yet, then snaps the woman's neck.

One Eye and his brothers are seen again when Bryan and Jillian sneak into the basement looking for things to steal from Danny and have sex on an old birthing table until Three Finger hits Bryan over the head with a statue. Saw Tooth and Three Finger grab Jillian's legs and move them up and over her head, until they both snap off completely.

Jackson takes Danny into the woods to meet his inbred family and tells him the Odets and the Hillikers are closely connected families who both believe in order to keep their families alive and pure, they must engage in incest, which Danny does with his cousin Sally. Vic is spotted by Three Finger spying on them and he's captured, tied up, and gutted for the Hilliker family to eat.

The next morning, Toni, Charlie and Rod find Danny at the front door drunk. He tells them to leave while they can while he stays. When they find out that Jackson is cooking their dead friends and find Jillian's severed head in a freezer, they try and escape the resort, but Charlie is captured by the Odet brothers who sodomize him with a fire hose and turn it on until his stomach explodes all over them. Rod gets caught in a bear trap and Three Finger stabs him in the head with a machete.

After Toni severely burns Sally's face with boiling water and beats Jackson to death with a set of old keys like brass knuckles after stabbing him in the eye, Danny berates her for further harming his family and she backs up in fear until Three Finger stabs her in the back of the head.

A few days later, the resort opens to the public with Danny as the caretaker and the Odet brothers as the chefs. Danny and Sally have sex once again while the three brothers watch, now having a permanent home and unlimited food, that being the guests of the resort who aren't reported as missing thanks to Danny's new wealth and connections.

He made his first appearance alongside his two deformed brothers, Three Finger and One Eye as they attack both the medical student, Chris Flynn and the group of friends including Jessie, Carly, Scott, Evan, and Francine. When the others went to get help, Three Fingers murders both Evan and Francine before bringing their bodies back to the isolated cabin with One-Eye and Saw-Tooth. Later, Saw Tooth and his brothers tracked down the remaining group as they investigate their cabin and Scott manages to kill Scott when he shoots him in the back with three arrows. However, Chris, Jessie, and Carly manage to escape shortly after.

That night, when Chris, Jessie, and Carly went to the old watchtower in order to call for help, Three Finger, Saw-Tooth, and One-Eye manage to locate them and set fire to the watchtower. However, the group of survivors manage to escape and was forced to run across the trees. Three Finger climbs the trees and he manages to kill Carly. Chris manages to hit him with a tree branch when he was about to attack Jessie, making him fall down to the forest ground, but he survives. Saw Tooth and One Eye angrily yell out due to their youngest brother nearly being killed.

The next day, Saw Tooth and his brothers manage to locate Chris and Jessie and they push Chris down the hill before they capture Jessie. Chris manages to survive his fall as he went to the mutant cannibals' cabin to attack the cannibals. Together, Chris and Jessie fought the mutants and eventually killed Saw-Tooth and One-Eye by blowing up their cabin before making their escape. 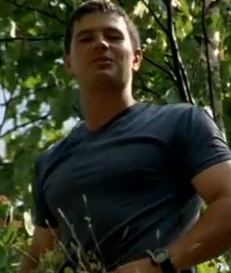 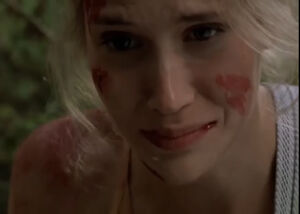 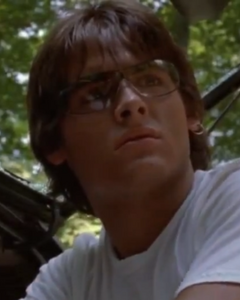 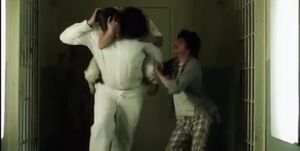 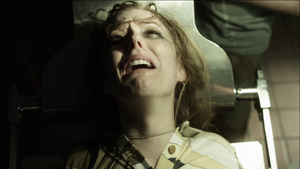 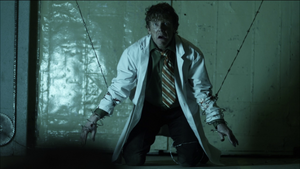 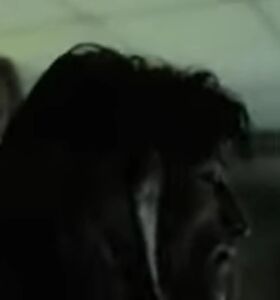 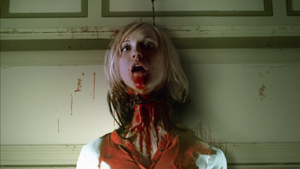 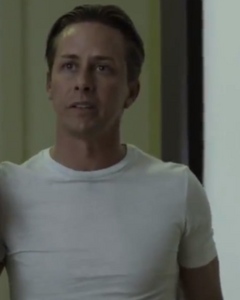 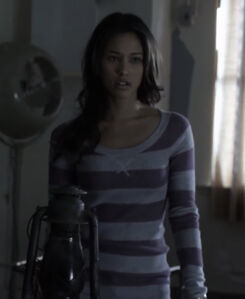 Bridget Manalo
Add a photo to this gallery 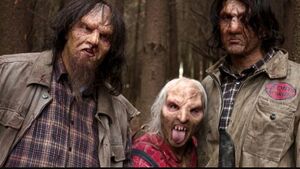 One Eye with his brothers. 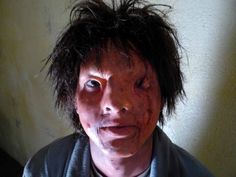 Young One Eye, he lost his right eye when he pulled it out of his own skull and ate it. 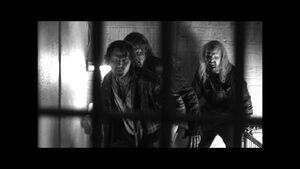 One Eye protecting his younger brothers when they were trapped inside their old cell.
Add a photo to this gallery

Retrieved from "https://villains.fandom.com/wiki/One_Eye_(Wrong_Turn)?oldid=4280059"
Community content is available under CC-BY-SA unless otherwise noted.