Onikage is a ninja-themed Duke Org and an antagonist from Power Rangers Wild Force.

He was voiced by Dan Woren.

Onikage appeared to Mandilok and offered his services, approaching Jindrax and Toxica with a plan to capture Princess Shayla. After he gave them ninja outfits, the three Duke Orgs snuck onto the Animarium at night. However Toxica touched the Sacred Water on the Animarium, which hurt her and her cries of pain alerted the Wild Force Rangers. Onikage quickly teleported himself and his cohorts away, but Toxica was angrily reprimanded by Mandilok for messing up the plan. The ninja Duke Org went to Toxica, offering a way to redeem herself and offered to cut off her horn, which he said would make her immune to the water's effects. When she was reluctant to lose her horn, Onikage told her they grew back, which was a complete lie.

She went through with it and went to the Animarium disguised as Merrick, while the ninja Duke Org summoned illusions of previously defeated Orgs as a distraction. The Rangers fought the illusions and found they could not hit them, but Merrick arrived and found the invisible Onikage. He blasted the Duke Org, breaking the illusions and the ninja retreated as the Rangers were contacted by the Princess for help with Toxica. As they were heading back to the Animarium, Jindrax and some Putrids fought them and Onikage took the opportunity to fire a bazooka blast at the group. Toxica managed to capture Princess Shayla and brought her to where Jindrax, Mandilok, and Onikage were waiting.

However she showed signs of weakening and when she repeated what the ninja Duke Org had told her, he denied knowledge of what she was talking about. After the rangers arrived and Toxica was destroyed by their Jungle Blaster, Onikage grew to giant size to fight them, while Mandilok left with Shayla and Jindrax. However their attacks were dodged, but Merrick managed to find the real ninja Duke Org again and blasted him, causing the giant illusion version of him to disappear.

Onikage retreated and he later contacted the rangers, telling them to come to the rock quarry if they wanted Princess Shayla back. After arriving, the ninja Duke Org offered to hold Mandilok's weapon for him, an offer the General Org accepted. When the rangers arrived, Onikage used his powers to create shadow versions of the rangers, which fought like they did and attacks they suffered happened to the rangers.

Mandilok complimented Onikage on his plan when suddenly Master Org appeared. The ninja Duke Org revealed that he'd been working for Master Org the entire time and watched as his master destroyed Mandilok, then turned his attention to Jindrax. However Jindrax teleported away with Shayla, while the Rangers retreated and Onikage went to find them while

Master Org took the Shadow Rangers to find the real Rangers. The ninja Duke Org found Jindrax, defeating him and leaving him for dead, before bringing Shayla to Master Org, who was watching the rangers fight their shadows. Jindrax arrived and called Master Org and Onikage completely evil, before the ninja tried to use his shadow power on him. However the

Duke Org used a mirror to reflect the power back at him, creating a shadow version of him instead. Onikage could not fight back against it and Cole managed to destroy the shadow, destroying the Duke Org as well. Master Org brought him back in giant form and the ninja pulled the rangers into a phantom world, where they were confronted by the spirits of Orgs they had destroyed. They could not call their Wildzords to help them, but the Wildzords formed the Pegasus Megazord on their own and saved the rangers from the phantom world. It drove off the Org Spirits and finally destroyed Onikage, before bringing the rangers to the real world.

Onikage is a skilled warrior and wields a ninja sword and a bazooka in combat. He can use a variety of ninja tricks, which include creating illusion versions of himself or other Orgs, turning himself invisible, and bringing someone's shadow to life as a real being. These shadow clones are determined to destroy the original and any damage dealt to them happens to the original person as well. Onikage can also teleport and make a projection of himself. 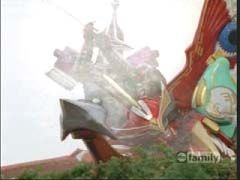 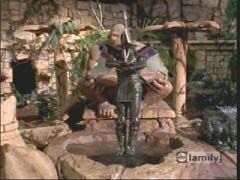 Onikage telling the rangers where to meet to get Princess Shayla back. 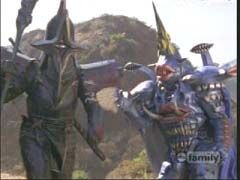 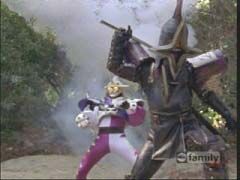 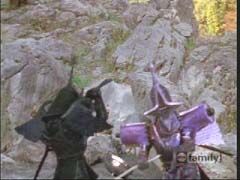 Onikage dealing with his shadow clone. 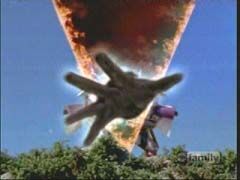 Onikage pulling the rangers into the phantom world. 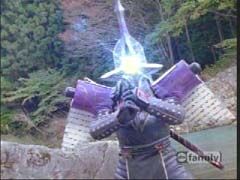 Onikage using his shadow clone power.
Add a photo to this gallery

Retrieved from "https://villains.fandom.com/wiki/Onikage_(Power_Rangers)?oldid=3814015"
Community content is available under CC-BY-SA unless otherwise noted.