Imitating noises around him.

Hunt down and kill every non-powered crime-fighter he can find (ongoing).

Onomatopoeia is a villain in DC Comics. He is primarily an enemy of the Green Arrow. He is a serial killer who targets non-powered, vigilante superheroes, where he earned his name because he imitates noises around him.

Onomatopoeia was created by Kevin Smith and Phil Hester.

Onomatopoeia first appears where he murders a female crime-fighter named Virago, after telling her his name. Later, he shoots Connor Hawke, the second Green Arrow, who is saved by his father Oliver Queen (the first and original Green Arrow). While Connor is undergoing surgery in the hospital, Onomatopoeia returns to finish the job. He kills several doctors in the operating room, and after his attempt to kill Connor is foiled by Queen and Black Canary, he manages to escape.

He is later recruited by Alexander Luthor, Jr.'s Secret Society of Super Villains as part of an army that is sent to conquer the city of Metropolis. An army of superheroes, backed up by the National Guard, successfully opposes the Society. Onomatopoeia is seen in a brawl with the Odd Man, a costumed, un-powered vigilante.

Onomatopoeia later frees the Joker from Arkham Asylum and gives him money to finance a gang war against Maxie Zeus. Eventually he confronts Batman, who defeats him. He escapes capture, however, by mortally wounding the Joker, forcing Batman to choose between saving the Joker's life and capturing his new opponent. It is later revealed that Onomatopoeia has a secret, seemingly normal life as a loving husband and the father of two children, who are unaware of his murderous activities. He explains his occasional injuries as the result of sporting activities such as tennis, polo, and hunting. He keeps mementos of his victories in a hidden shrine behind a bookcase, saving a case each for Batman and Green Arrow.

Onomatopoeia later takes the disguise of "Baphomet", a new vigilante who had been teaming up with Batman. He appears as Baphomet early on, helping the Dark Knight defeat Etrigan the Demon and Poison Ivy. He later assists Batman in defeating villains such as Deadshot, Crazy Quilt, and Calendar Man, even unmasking himself in front of Batman to gain his trust (as Batman had no idea what Onomatopoeia actually looked like this did not reveal the ruse). Batman then takes Baphomet into the Batcave and introduces him to a disguised Silver St. Cloud before Batman reveals he is Bruce Wayne and Silver unmasks herself. Bruce invites Baphomet to stay for breakfast as he turns away and puts his utility belt on the table with a "KA-KLAK". He hears Baphomet repeating the sound before turning in horror to see Onomatopoeia midway through slicing Silver's throat and mimicking the noise of the blade. 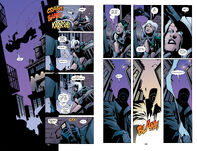 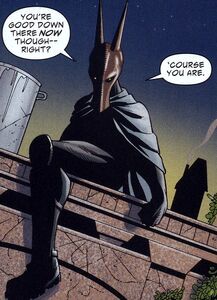 Onomatopoeia posing as the vigilante "Baphomet". 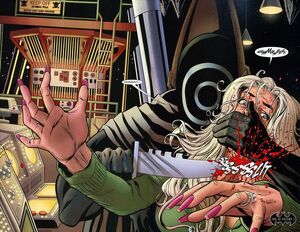 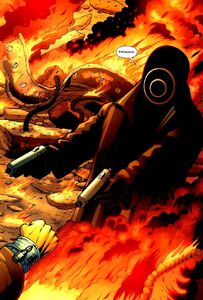 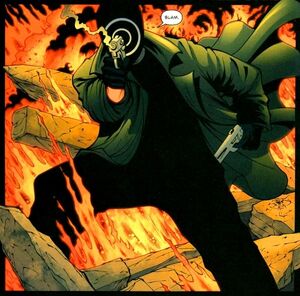 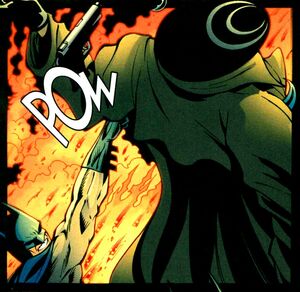 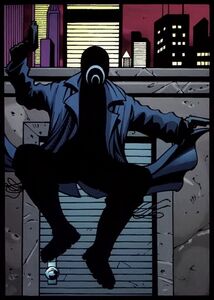 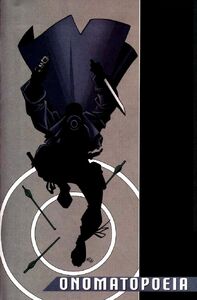 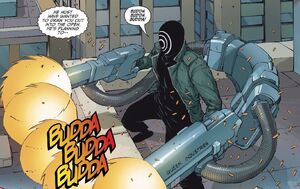 Retrieved from "https://villains.fandom.com/wiki/Onomatopoeia?oldid=3551316"
Community content is available under CC-BY-SA unless otherwise noted.