Onoskelis are common female demons from the videogame Agony.

Onoskelis appear to be hideous demons in a female body, while the head is resembling a Venus flytrap and the legs appear to be totally goat hairless legs. They are mentally unstable and can not see, only sense. When they attack they will pray if they are caught. Also they get sexually aroused but most of the times they would return in their normal state and murder the victim.

Most of them appear to have different horns and skin tones. Their origin is mostly unclear to anyone. All of them are only female gendered, no male members. The best way not to get killed by them is to keep the breathing toned down. If there is no other way to escape them, holding breath non-stop is the only way to go.

Onoskelis are attracted to warm places such as torches and flame. You could also take their sense with the warm torches, throwing them to the other side to be able to escape them.

In some cases, they can attract various demons to block your way or even getting you stuck in a spot because of the arousal they feel of the warmness. Some of which uses their power the fireballs to kill you or just push you off a edge. 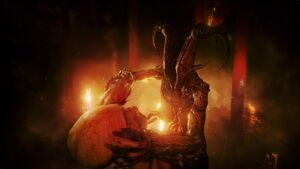 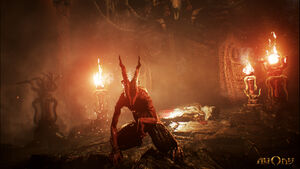 Retrieved from "https://villains.fandom.com/wiki/Onoskelis?oldid=3529488"
Community content is available under CC-BY-SA unless otherwise noted.