Light the Flame of Destruction.

Aid his master Ganon in his goals (both succeeded).
Help Ganon take over Hyrule (failed).

Onox, also known as the General of Darkness (and erroneously referred to as Knox in Oracle of Ages) is the main antagonist of the video game The Legend of Zelda: Oracle of Seasons.

Onox resembles an Iron Knuckle and is one of the last bosses encountered in the game, capable of taking a dark dragon form. His goal in the game is to ruin the land and he often referred to himself as a General of Darkness, as he serves Ganon.

This biography of Onox is organized into the latest "official Zelda timeline", this may change completely in the future as the timeline given is merely meant as an example, and there have been official timelines before it. It is the timeline where Ganondorf killed Link in his final battle with him, leading to the Imprisoning War described in the backstory of A Link to the Past.

Onox was a dark dragon who lived in the Dark World and acted as a high ranking general of Ganon. Eventually, after Ganon's destruction, Onox was contacted by Twinrova and was sent to Holodrum to light the Flame of Destruction.

After Veran's defeat and Link's arrival in Holdrum, Onox kidnaps Din and takes her to his castle, imprisoning her inside a giant castle. Onox then proceeds to sink the Temple of Seasons into Subrosia.

After collecting the Essences of Nature, Link entered the Castle of Onox and engaged in battle with the general himself. After beating Onox in both his Gerudo and his true Dark Dragon forms, Onox mocks Link, and reveals that Ganon will be revived soon. Onox is then destroyed.

In the manga of The Legend of Zelda: Oracle of Seasons, Onox reprises his role as the main antagonist. In it, he has more screen time and a crueler personality.

Onox takes on two forms, he first appears in a façade that is meant to resemble a male Gerudo wearing Iron Knuckle armor. His second, true form, is that of a massive Dark Dragon with a red gem on his forehead. 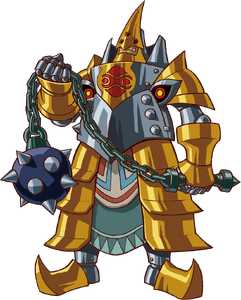 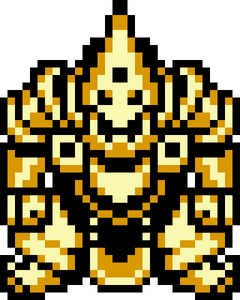