Destroy all life on Earth.

Make mutants the dominate species on Earth (both failed).

Onslaught is the name of an extremely powerful and malevolent mutant thought-form created by the combined consciousness of Professor Xavier and Magneto.

He served as the main villain of the crossover of the same name, Heroes Reborn and the Marvel vs Capcom game, as well as the Onslaught Reborn and Axis storylines, making him a major villain in the Marvel universe. He is also Franklin Richard's archenemy.

When Onslaught was created, he wanted to follow the mindset of Magneto and have mutants rule the world, yet after he saw a vision of the Age of Apocalypse timeline from the mind of Dark Beast, he became convinced that neither human nor mutant could rule the world and set upon exterminating both races, in effect wiping out pretty much all life on Earth.

To achieve this end, he kidnapped Franklin Richards and Nate Grey in order to add their formidable psychic abilities to his own, making himself all but a god -this new, immensely powerful Onslaught would fight with the Avengers, X-Men, Hulk and Fantastic Four.

After much fighting Hulk was able to break Onslaught's armor, destroying the monster's physical form but exposing his raw psychic energy in the process, in order to defeat him many of the non-mutant heroes sacrificed their lives by entering Onslaught's exposed form (the mutant heroes could not do so as he would have fed off them and become even more powerful), weakening him enough for the X-Men to finish him off.

This battle led to the Heroes Reborn story arc and made Onslaught one of Marvel's "love or hate" villains, with some fans liking him and others seeing him as little more than an elaborate tool for needless reshaping of the Marvel universe.

Regardless of this Onslaught was, for better or worse, one of Marvel's most powerful villains and his actions would have profound changes on the universe as a whole.

Following the Scarlet Witch's proclamation of "No more mutants" and the subsequent depowering of most of the Earth's mutants, a large mass of energy was released into space. After awakening Vulcan and Darwin and being controlled by Shen Xorn (who returned to Earth, fused with Michael Pointer and was then defeated by the combined efforts of the New Avengers), the ball of energy returned to Earth a second time and gained physical form as a recombined Onslaught. Immediately seeking out Franklin Richards (and failing to kill him through a mind-controlled Human Torch and Reed Richards), Onslaught quickly cornered the child in his bedroom, where Franklin once more used a toy ball as a focus to escape into a world that was, for the most part, an exact copy of the Counter-Earth he had created.

There, with the help of recreated versions of the Fantastic Four, Avengers and their allies and foes, Franklin would do battle with Onslaught. The fight would take them to the Baxter Building where Bucky would sacrifice her life knocking Onslaught into the Negative Zone. Bucky would find herself transported to Earth-616 while Onslaught would remain trapped in the Zone. He was last seen floating near Wonderland curious of its purpose. Onslaughts future plans remain unknown at this time.

During World War Hate, the Red Skull would finally cross a line so heinous that Magneto took it upon himself to personally murder the madman, yet in the process, he unleashed a merged version of Onslaught and Red Skull. This became known as Red Onslaught.

Onslaught possessed all of the mutant abilities of his progenitors Professor X and Magneto. He later added the powers of Franklin Richards and Nate Grey to his, making him even more powerful. 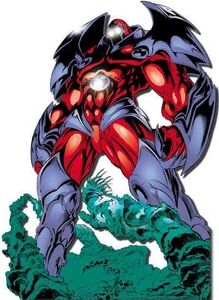 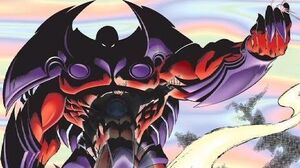