They move from place to place

Getting away with their gold robbery.

A rogue CIA black ops team led by Onyx Adams is an antagonistic faction in the sixth season of the series Arrow, appearing as the main antagonists in the third episode, Next of Kin. Onyx is portrayed by Chastity Dotson.

Onyx Adams and her black ops squad operated undercover in Syria, disappearing in 2015 with 100 million dollars in gold owned by the Syrian government. Eventually, three members of the team defected back to the CIA but two of them were killed during gas attacks. Although the gas attacks were blamed on the terrorist organization ISIS, it was in truth Onyx hiding her tracks.

Onyx and her team attack Kord Industries where several IT technicians are on night shift. Suddenly, Onyx appears in the middle of the room. The men are startled and one pushes an alarm button, causing several guards to enter the room. However, Onyx is not intimidated and instead throws several high-tech flashbang grenades to the floor. These grenades blind everyone but her. While the guards are caught in surprise, they and the technicians are shot by Onyx. Onyx uses the hand print of one of the deceased technicians to gain access to the internal server.

Investigating, Team Arrow finds out that Onyx used the access to the server to download the transfer route of a newly-developed military nerve gas. Team Arrows prepares to interfere should Onyx attempt to hijack the transfer and indeed, Onyx arrives and shoots both drivers. However, when she opens the truck to steal the nerve gas she is greeted by the remaining members of the team who have hidden inside the truck. As she cannot fire at the truck without risking to hit the nerve gas canisters, Onyx holsters her weapons. Instead, she throws more of her flashbangs, briefly distracting the team members while suddenly the rest of her team arrives. While the team steals several gas canisters and escapes in a car, A drives off in the van and causes it to crash soon after.

Despite their failure in stopping Onyx' team from stealing the gas, Team Arrow is able to identify her and her team, including their history in Syria. This causes them to believe that Onyx is after the last of the three defectors, Rob Reynolds, as he is the only one who can link her to the stolen gold.

Back at their hideout, Onyx meets with the rest of the team and demands an update on their situation. She asks whether any of her team members has doubts because they are going after their brothers in arms. They all are willing to get revenge on Reynolds but one team member asks about the Green Arrow. Onyx claims that they saw him in the field and that he isn't a threat to them. The group then moves out to kill Rob Reynolds. They track him down to a hotel in Star City and Team Arrow, having tracked Reynolds as well, head there as well. This time, they have special glasses to defend themselves against Onyx' flashbangs. With these glasses, they can take down Onyx' team with ease but when Diggle approaches Onyx and tells her that her tricks do not work anymore, she states that she only needs collateral and activates the trigger unleashing the nerve gas. While Team Arrow deals with the gas, Onyx pursues Reynolds. Arrow, in turn, goes after her.

Onyx can track down Reynolds to the garage and she almost shoots him but Diggle arrives in time. A battle between him and Onyx ensues, which ends with Diggle knocking her out, ending her threat to Reynolds. Meanwhile, Team Arrow can take down the gas by igniting it, using one of Onyx' flashbangs as explosives. 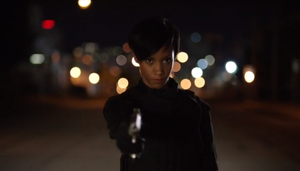 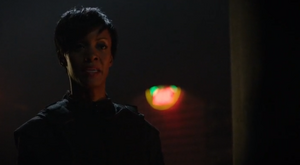 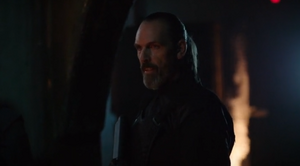 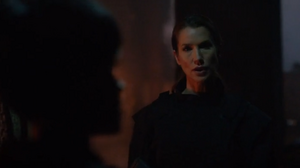